Watch video highlights of Superchunk, Blitzen Trapper, Minus the Bear and others ripping it up in Seattle. 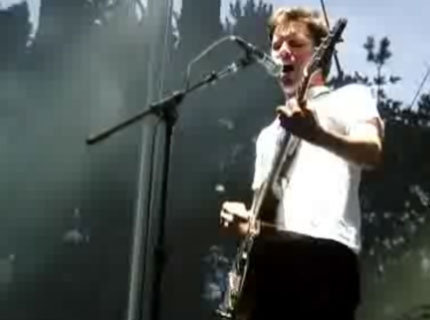 After a brief spell of rain, the sun returned to Seattle Center Monday on the final day of the 2008 Bumbershoot Music and Arts Festival, allowing an apt closure to what has been an action packed Labor Day weekend.

Indie rock mainstays and hometown heroes Death Cab for Cutie — who hadn’t played a Seattle gig in over two years — closed out the festival to a bursting-at-the-seams Memorial Stadium, accepting the crown as their hometown’s favorite son. But Gibbard and crew were just the icing on the cake. Earlier in the day, hardcore music fans young and old, plus curious families and many other meandering bystanders, turned out to sample the bill’s eclectic pallet, from Dan Deacon to Blitzen Trapper, the Offspring and Sondre Lerche.

Below, check out video highlights from Monday’s sets, and be sure to check back to SPIN.com as we crown the best from the fest, post more performance footage, and unveil backstage video blogs from the likes of Paramore, Anti-Flag, and the Whigs.