The pop-punk quartet set their fifth release, entitled Folie A Deux, to drop the same day as the Presidential election. 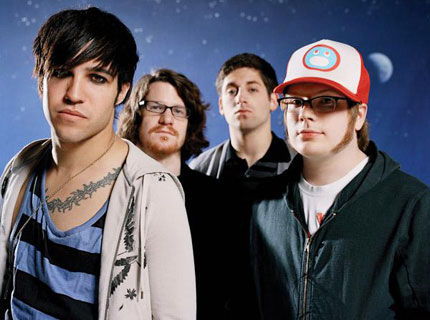 We already knew the Chicago natives of Fall Out Boy — who rocked the Democratic National Convention in Denver last night — are strong supporters of Barack Obama. So it’s fitting that on November 4, the day of the U.S. Presidential election, the boys will make the ultimate campaign contribution with the release of Folie A Deux, their fifth album and follow up to 2007’s Infinity on High. The album’s first single will be the track “I Don’t Care.”

To rally voters, members of Fall Out Boy spearheaded “a politically charged group that unveiled cryptic ‘Big Brother’-type messages in order to support and ignite a democratic process,” a roll-out which garnered “over one million impressions in just one week online.”

“This roll-out was started to engage people and let them tell their own stories,” said bassist Pete Wentz, in a statement. “We came up with the beginning and the end, while the rest happened organically.”