The Rhinestone Cowboy's new album features covers of Green Day, U2, and Foo Fighters, among others. Find out why. 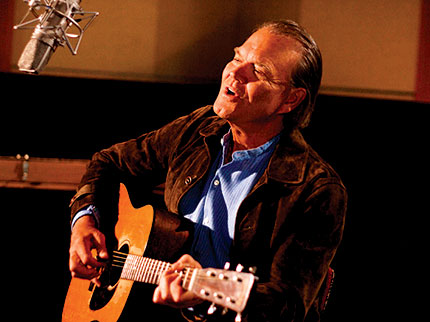 Music has always come easy for Glen Campbell — his gift for ballads (“Wichita Lineman”) and rodeo-bar staples (“Rhinestone Cowboy”) made him the king of country pop, but it’s away from the mic where life’s been hard — drug abuse, divorces, a much-ridiculed mug shot from a 2003 DUI arrest. Now he’s releasing the strangest album of his 46-year career: Meet Glen Campbell, a collection of cover songs by Green Day, U2, and Foo Fighters, among others, and that finds the 72-year-old in a reflective mood. “I’ve made mistakes,” he says. “But God forgives and so do I — or I beat ‘em up.”

Why wait until now to call an album Meet Glen Campbell?

You cover songs by the Replacements and the Velvet Underground. Were you already familiar with their work?

A lot of the songs I’d heard before, and some of ‘em I hadn’t. [To his wife, Kim] Honey, how many songs did [producer Julian Raymond] send me? I mostly went with Julian’s picks. The John Lennon song [“Grow Old With Me”] — gosh. [Sings] Dee-doo-dee-doo. Wow!

Did you have reservations about covering any of these songs? Those bands weren’t choirboys.

The songs stand on their own. [Country singer] Roger Miller once said, “It’s my mouth, and I’ll haul coal in it if I want to.”

How did Cheap Trick’s Robin Zander come to sing backup on the album?

Oh, I don’t know. Who was it that you said? [To wife] Robin Zander? You know, I really don’t know. You’d have to call Julian.

You’ve always kept the darker aspects of your life separate from your music. Why?

Why grieve and moan? Ever since I ran into Kim, the whole world turned around. She was an honest woman.

You had problems with dishonest women?

I had, in fact. But I’d been dishonest before, too, so who am I to gripe? I’d sat down and prayed for God to send me a wife. I just couldn’t get along. I can tell you, lies will break up anything.

Your mug shot was everywhere a couple of years ago. What do you think of the way celebrities are covered now?

Some people don’t like to forgive. That’s not God’s way. God don’t lie and B.S. you. I tell you, I’ve been so happy since I married Kim. Well, maybe after I straightened her out a little. Ha ha!

It goes back to instrumental guitar playing, toDjango Reinhardt — the best in the world.

How about people making music now?

You ever heard any Django Reinhardt?

In the ’60s, you filled in when Brian Wilson was unable to tour with the Beach Boys. What was wrong with him?

He was abused a little bit when he was a kid. He really had to toe the line with his old man. Every good writer I know has something in their past they have to get out. That’s why guys write books; that’s why I sing songs. Especially songs like “Rhinestone Cowboy.”

What was in your past?

How did music help you?

My dad always said, “Whip light or drive slow, pay cash or don’t go.” [Pauses] I don’t know what that means. I think it means you have to toe the line and do it God’s way.

Who do you think this album will appeal to?

I think it’ll make some waves out there. The young kids have never heard these songs before. Then there’s the people who have heard ‘em. It covers a lot of territory.

You were on The Mike Douglas Show when a two-year-old Tiger Woods came on to putt against Bob Hope. Are you surprised to see how Tiger turned out?

No. His dad started him from scratch. That shows what you can do with a kid that’s athletic and has a clean mind. [Publicist reminds him of his own tee time] Oh, I gotta go soon.

I hope I shoot a low score every day.

Al Jourgensen Bids Adieu to Ministry, Not to Speaking His Mind

Going Far Out With Empire of the Sun