From the Eastsport Cafe at Lollapalooza ’08: Tally Hall

VIDEO! Watch SPIN.com chat with the Tally Hall gang (sporting their many colored ties) about their Internet show, television, and playing with the Zombies. 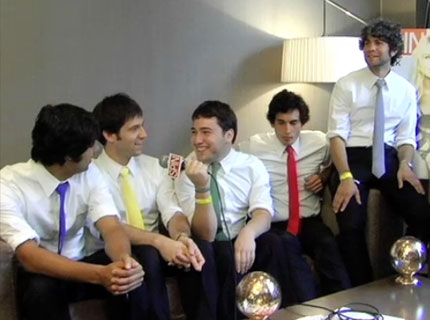 Last weekend at Chicago’s Lollapalooza festival (Aug. 1-3), which featured sets from the likes of Radiohead, Nine Inch Nails, Wilco, Kanye West, and Rage Against the Machine, SPIN.com kicked back in the air-conditioned Eastsport Cafe with Michigan quintet Tally Hall for a brief chat.

Watch video of the band as they cracked jokes nonstop and chewed the fat on The OC, other television favorites, and performing with ’60s legends the Zombies, and don’t forget to check out Spin Editor Doug Brod’s blog wrap-ups from all three days of the event.