Singer-songwriter Joseph Knapp enlists an Omaha army to flesh out his tender folk-pop on Déjà Vu. 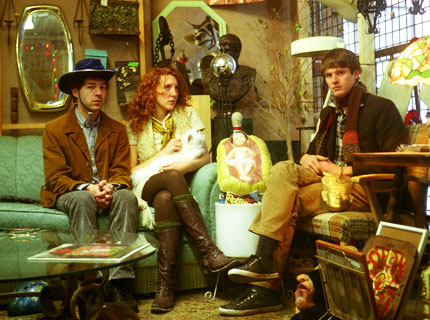 What? The indie rock apple never falls too far from the Saddle Creek tree, and Son Ambulance sit in a similar fruit bowl as their Nebraskan contemporaries. Singer-songwriter Joseph Knapp’s pet project blends the moody acoustic stylings of underground icon Nick Drake with the poppier moments of Omaha’s own prodigal son Conor Oberst, with whom Knapp split the Oh Holy Fools EP in 2001. Son Ambulance flirt with a Shins-like bounce on the woozy, organ-drenched “Horizons” and ’70s psychedelic-lite vibes on “Juliet’s Son the Renegade,” both from the forthcoming Someone Else’s Déjà Vu, due July 8.

Who? Indie-pop project Son Ambulance, the brainchild of cornhusker Joseph Knapp. Latest full-length Someone Else’s Déjà Vu is his first since 2004’s experimental Key, and features in-studio assistance from local members of the Faint and Tilly and the Wall, along with frequent collaborator and sometimes member Jeffrey Koster. Other allies like Jenna Morrison, Dereck Higgins, James Cuato and Knapp’s brother Daniel have also been known to lend a hand, coloring Déjà Vu with eclectic flourishes ranging from saxophone and double bass to analog synthesizer.

Fun Fact: Wish the band good fortune on their summer tour — the outfit haven’t always had the best luck on the road. During one West Coast tour their 1987 Chevy conversion van, which was purchased for $750 from an alcoholic gambler in Pacific Junction, gradually deteriorated beginning in Oregon before sputtering to its death on an Idaho interstate.