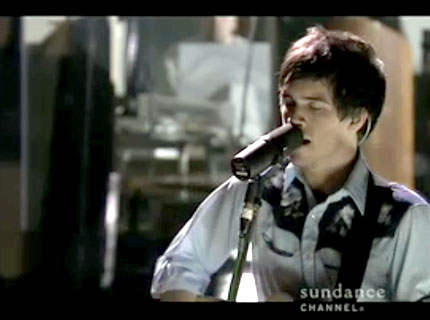 Rest your eyes on an exclusive sneak peek at Sundance series Live From Abbey Road’s new episode documenting Panic at the Disco’s return to the famed London studio — the creation site of their new set Pretty. Odd., plus albums from the Beatles to Radiohead — to play tunes new and old, and discuss their sophomore record.

In anticipation of the episode’s premier tomorrow (July 3) at 10 P.M. EST, SPIN.com chatted up drummer Spencer Smith, who, along with the rest of the band, just wrapped a sound check in France as part of their summer European tour.

“[It was] kind of perfect timing, coming from recording the album and then going back a few months later to record the show. It worked out really well by chance,” Smith tells SPIN.com. Descending on the “huge, gym-sized” studio one, Panic at the Disco strutted through five or six tracks, including Pretty. Odd cuts “Nine in the Afternoon,” “That Green Gentleman,” and “Mad as Rabbits,” plus a cover of the Band tune “The Weight.” “We ended up finding out that the head engineer for the sound for the show… used to play drums with the Band for a couple of years in the ’70s,” Smith awes.

“We were so impressed by walking in and looking around, it’s the special thing about it, to be able to work on our songs there — there’s just so much history,” Smith states. “The most famous of all the bands that have recorded there.” Add Panic at the Disco to the lengthy list.

Now Watch This: Panic at the Disco playing “I Write Sins Not Tragedies” at Abbey Road