Check out "Runs in the Family"-- the third entry in a six-part video series from the Dresden Dolls' female half that has thus far consisted of clips for "Astronaut" and "Ampersand" -- in advance of its posting on YouTube and the release of her new solo album, Who Killed Amanda Palmer. 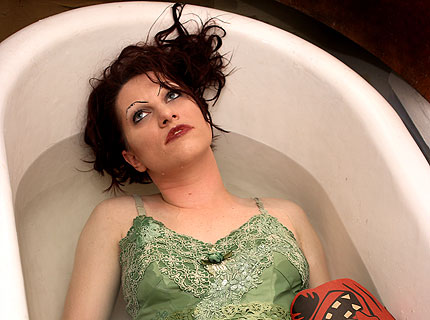 Like director David Lynch’s foray into digital video for Inland Empire, the new Amanda Palmer clip for “Runs in the Family” (viewable below) presents a manic mood that’s eerie in its intimacy, disorienting with its quick cuts, and effective in its emotional impact. And her forthcoming solo album, Who Killed Amanda Palmer — its morbid title a reference to Lynch’s Twin Peaks — likewise indicates that a combo of unsettling, sinister camp seems to be Palmer’s forte.

“Oh, I just love the man,” Palmer tells SPIN.com about the influence Lynch has had on her solo creation. “I loved him dearly as a teenager, mostly because he put his finger on the pulse of how fucked up and twisted suburban life is under the superficial green lawns and white picket fences. And Twin Peaks is just some of the best television ever made.”

In “Runs in the Family,” Palmer sings in staccato bursts of passionate confession, insisting to listeners, “I want you to know me, know me, and my family.” Squirming on the floor of a cluttered room, Palmer often peers directly at camera as if inviting judgment. This is fitting, since Palmer has always been interactive with her fans, something the video series itself is an extension of.

“I love being able to put out as much content as possible, all the time,” she affirms. “The Dolls fans are such a rad bunch, and they receive what I do so intelligently. But also, I just love making videos with Michael Pope. We have a blast coming up with this shit.”

The musical direction of the videos has surprised some, as has the news of contributions on her LP by the likes of Ben Folds. Which all begs the question of whether Palmer is heading in more straightforwardly satisfying directions.

“Ben is a sorted twisted version of a pop talent, and in a weird way, I am too,” Palmer says. “We overlapped there and worked really, really well together. I think the record is going to blow people away. It’s very recognizable as my voice, and my songwriting, and I think the production elements that we added aren’t so much a departure from the Dolls as an understandable next step.”