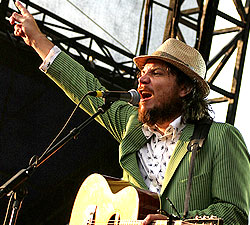 Though fresh snow most certainly isn’t in the forecast, musicians will flock from ski resort to ski resort this summer, and Uncle Tupelo offsprings Wilco and Son Volt are among them, headlining the inaugural Jackson Hole Music Festival alongside the Black Crowes. The Avett Brothers, Medeski Martin and Wood, Backdoor Slam, and Kaki King will also appear at the Wyoming ski resort Aug. 16 & 17. Additional acts will be announced in the coming weeks.

Much like its Whistler counterpart, the new event is produced by the Festival Network, which hopes to offer fans the ultimate outdoor environment, in this case, the border of the Grand Teton National Park. “Jackson Hole truly embodies the ideal type of location that we want to define our festivals,” said Tom Shepard, CEO of Festival Network. “We can’t imagine a better place than under the Tetons to host such an amazing festival.”

Tickets for the Jackson Hole Music Festival go on sale May 30 at 9 A.M. EST exclusively via jacksonholemusicfestival.com, and run $72.50 for single-day passes and $130.00 for two-day general admission passes.