New Butch Walker Album Due in August, Tour in July

Producer/frontman Butch Walker is at it again, hitting the road for a July tour that spills into an August conclusion at Chicago’s Lollapalooza, and releasing a new album, Sycamore Meadows, in August.

Walker, who’s also judging our Hot Pursuit contest, where an unsigned band can score a record deal and a spot at Spin‘s SXSW party next year, is bringing old pal Jesse Malin out on the road. The tour kicks off in Vancouver on July 6, and tickets go onsale this Saturday, but a presale for the first part of the tour is already underway at this site (username: butch / password: walker).

The new album will include “Ships in a Bottle,” which chronicles the destruction of Walker’s house by last year’s California wildfires. 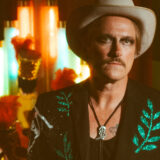