Frontman Doug Martsch names tentative album tracks for the follow up to 2006's You in Reverse, which was recorded digitally and is more collaborative than ever. 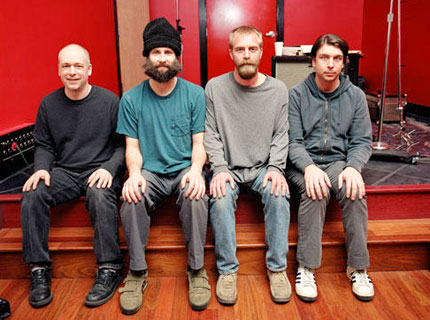 Though the noodling Northwestern stalwarts are mapping a North American trek this summer/fall to revisit their 1997 opus Perfect From Now On, frontman Doug Martsch and crew are pushing forward, and have capped basic recording efforts for their yet-to-be titled follow up to 2006’s You in Reverse.

According to a Billboard.com interview with Martsch, the sessions, recorded digitally with Protools, have been more collaborative than ever with all three guitarists riffing on “endless tracks,” and recording up to “five takes” each.

Tunes like “Nowhere Lullabye,” “Done,” and “Good Old Boredom,” all of which the band road tested live, are expected to appear on the final album, as is spanking new ditty “Planting Seeds,” one of 15 songs the quartet recorded in the studio. “[It’s] a real conventional kind of pop/rock song. It reminds me of a Tom Petty song or something, but it probably doesn’t sound anything like that,” Martsch said. And the rocker claims another, currently title-less track is “kind of like a Treepeople song; a fast, post-punk thing.”

Built to Spill will return to the studio through the end of June, but not before performing this weekend at Washington State’s Sasquatch! Music Festival.

As for the band’s forthcoming tour behind Perfect From Now On, the dates have yet-to-be revealed, but cellist John McMahon, who originally played on the album, will come along for the ride.

Check back to SPIN.com for further album and tour updates.