The Cure, R.E.M., Modest Mouse, and many others gear up to hit eastern Washington State, while Treasure Island unveils dates for second annual installment. 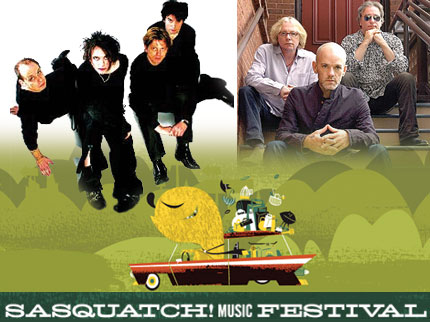 Surely earning the exclamation mark in its title, officials for Washington State’s Sasquatch! Music and Arts Festival have unveiled the lineup for the 2008 installment, and to say the least, it’s exciting:

The Cure, R.E.M., Modest Mouse, Death Cab for Cutie, Stephen Malkmus and Jicks, the Breeders, the Hives, Built to Spill, Flight of the Conchords, Tegan and Sara, Ghostland Observatory, the New Pornographers, the National, Beirut, Cold War Kids, the Kooks, the Little Ones, Rogue Wave, Okkervil River, Mates of State, Battles, Destroyer, Dengue Fever, White Rabbits, Grand Archives, the Cave Singers, and a handful of others will all descend on the Gorge Amphitheatre May 24-26 to commemorate their Memorial Day Weekend.

Also, something noted as the Flaming Lips’ “UFO Show” will appear, though it is unclear whether it is a live performance, or a screening of the much-mooted, long-in-the-coming film. Either way — wow!

After last year’s first-ever run, the San Francisco area’s premier festival, Treasure Island, will again return to a man-made island smack dab in middle of the Frisco Bay Sept. 20-21. Though the lineup has yet-to-be revealed, the two-day festival, co-promoted by Noise Pop and Another Planet Entertainment, hopes to catch an assortment of major touring acts.

“Thankfully the response to last year’s event was overwhelmingly positive,” Noise Pop co-founder Jordan Kurland said in a statement. “Our goal with the second installment of the festival remains the same — to present a diverse lineup of artists that you will not find at any other festival in a setting that is impossible to replicate.”

On the Web:
Sasquatch! Music and Arts Festival
Treasure Island