No, you're not on acid: Check out the vivid imagery and obscure plot line of the eccentric nightingale's new music video. 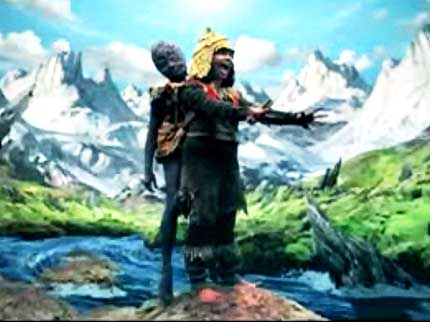 Newsflash: Icelandic-bred, gnome-like songstress Björk is, um, slightly eccentric. And for this, we are thankful, for only Björk’s oddball, imaginative mind could conjure the alternate-reality story line of her latest music video, the cornea-stimulating epic for “Wanderlust,” a tune off 2007’s Volta.

Filmed by San Francisco-based duo Encyclopedia Pictura in both 2D and 3D with a custom-made stereoscopic rig, “Wanderlust” is a part animated, part in-the-flesh video featuring puppets, elaborate sets, and the work of over 40 artists. Here, Björk, clad in historically traditional central Asian wear, rides a herd of shaggy yak-like creatures (who feel a bit pilfered from Where the Wild Things Are) down a mountain river while toting a creepy, clay doppelganger of sorts on her back. And then, believe it or not, the video gets even weirder!

In the vivid imagery of its last scene, as the tune’s glitchy beats taper off, the songstress succumbs to a Tibetan god’s coaxing, plummeting over a waterfall, uniting with her avatar midair, and, upon reaching water-level, spins down a vortex-like whirlpool into the depths of the ocean. In the final seconds, Björk, with doppelganger in tow, is met by two outstretched hands. Whoa.