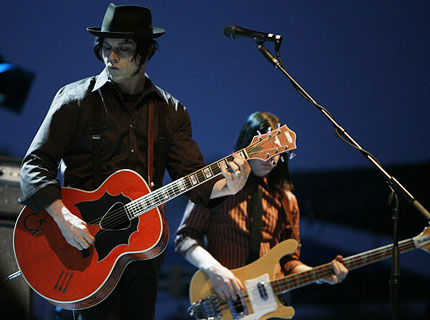 Best Use of New Material as Foreplay: The Raconteurs

For those who take their blatant agenda pushing with a we-will-rock-you twist, the Raconteurs provided a thirst-quenching happy hour cocktail. The Jack White and Brendan Benson-led rock gang cut to the chase in introducing Coachella to their new album Consolers of the Lonely, stacking their set from top to bottom with new tunes including “Consoler of Lonely,” “You Don’t Understand Me,” and “Top Yourself,” delivered with a “you’ll take it and like it and go out and buy it if you haven’t already” badass confidence.

This time around the recipe called for a heavy helping of White, with Benson stepping into the spotlight only rarely, as on “Many Shades of Black.” The band eventually served up tunes from the back catalogue: White played with astonishing desert-hushing anguish on “Blue Veins” (which came with a guitar solo that, even considered on its own solitary merit, was sufficient to secure him a best-in-genre nom), and embellished “Steady as She Goes” with a pleasing and ever-so-subtle crooner affect.

Most Likely to Corner Kim Deal and Kraftwerk Backstage to Reminisce about Coachella’s Class of ’04: Architecture in Helsinki

Fresh from Australia, perma-giddy indie rock ensemble Architecture in Helsinki followed Les Savy Fav on the Outdoor Stage, treating the audience to a sampler of their bongos-to-brass non-sequitur fare. After ratcheting up Beck’s “Deborah” falsetto with a Fozzie Bear intonation on “Debbie,” vocalist Cameron Bird got nostalgic: “In 2004 a couple of us came to see [Coachella]. It’s weird to be here,” he said, gesturing to the stage, before pointing to the audience in solidarity, “when I was there.” (Pause for flashback. Spotted: Architecture in Helsinki schooling everyone on the annual “bang on lots of stuff to make different noises” art installation.)

Proving they’d be a shoo-in for inclusion on a Cocktail: The Sequel soundtrack, the outfit triggered an audience conga line via calypso-infused number “Like It Or Not,” eventually closing out their set with a sublimely chorused, instrument-arsenal-on-display performance of “Heart it Races.” And we thought getting goose bumps in response to the final song of the set in 90-degree weather was just an urban myth.

Most Likely to Over Share, in a Juno Kind of Way: Tegan and Sara

Keeping with the femme rock theme instilled by their Coachella main stage predecessors the Breeders, Canadian singer-songwriter twinship Tegan and Sara came to the stage with girlie banter at the ready. Sara (90% sure it was Sara) used the stage as her confessional, parlaying a monologue about performance jitters into an unexpected endorsement for the application of sunscreen underneath clothing. Her reasons: to avert any potential “boob burns.”

“I’m so sad about what I just said,” she added matter-of-factly.

But if there were regrets to be had, they weren’t shared by the Lillith Fair-ian fans, who ate up the greatest hits (“Speak Slow, “Fix You Up,” “So Jealous”).

Newer set highlights were greeted with equal appetite, including “Hop a Plane” and a second-times-the-charm pass at “Back In Your Head,” which was initially thwarted by Sara’s out-of-tune guitar. “This is the part of the show that happens every night,” Tegan proffered on the back of said technical glitch. “It’s called the clusterfuck.”

Most Deserving of a Performance Tent Equipped with One of those Dance Floors where the Squares Light Up: Cut Copy.

Despite the overbooked-Bikram-yoga-class-on-a-Sunday-morning conditions in the Gobi tent, the audience came ready to get their workout on* with synthy dance trio Cut Copy.

The Australian outfit played up the hands-over-head ecstatic dance element of a repertoire that also manages to placate the “nothing too distracting on the iPod while I’m working please” crew at the office, with electro-fizzy performances of old faves “Time Stands Still” and “Zap Zap.” But that was just the warm-up: “Okay Coachella, it’s dancing time,” lead singer Dan Whitford announced to the sweat-drenched assembly. Eagerly taking their cue, the audience reached a disproportionately high impact frenzy on “Saturdays” and gave the new, New Order-esque single “Lights and Music” a warm, fists-in-air reception.

*Which means they were also suited up in accordance with this year’s Coachella dress code. On her: jean shorts that are simultaneously high-waisted grandpa-pants and go-go-dancer short — with optional Tiger Lily-style headband; On him: choice of T-shirt with black and white Charlie Brown-inspired pattern, or short sleeve collared shirt with collar way-the-f-up — bonus points for height of collar.

The Raconteurs / Photo by Lucy Hamblin

The Raconteurs / Photo by Lucy Hamblin