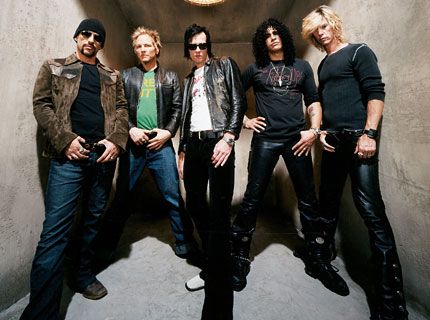 After last week’s spat between frontman Scott Weiland and drummer Matt Sorum, and subsequent reports of the band’s demise, Velvet Revolver guitarist Slash has now come forward, stating the rockers have not split, and will push on despite Weiland’s plans to rejoin Stone Temple Pilots for a string of summer gigs. “There will be a third album,” Slash told the Daily Star. “We don’t know how or when but the core four guys will continue.” [Via NME.com]

If you’re yet to tire of indie cash cow Juno, log onto iTunes April 8 and pick up Juno B-Sides: Almost Adopted Songs, the digital-only sequel to the film’s original, chart-busting soundtrack, that features tunes from returning artists like Kimya Dawson, Buddy Holly, and Belle and Sebastian, as well as newcomers like Yo La Tengo. Also featured on Almost Adopted: Protagonist Ellen Page singing a tune penned by film screenwriter Diablo Cody. [Reuters via the Daily Swarm]

Amy Winehouse is prepping new material with producer Mark Ronson for her forthcoming third album, and according to sources, the tracks are “very dark” and draw influence from the subject of death. “Her next album is darker than ever,” an unidentified friend of Winehouse told the U.K. Sun. “Her problems are pushing her over the edge and she’s turning into a depressed recluse… She’s written quite a lot of the third album already. It is very, very dark but she produces some of her best music when she’s in pain — and the past few months have been hell for her.”

Actor and rapper Mos Def has taken a role as world-renowned guitarist Chuck Berry in Cadillac Records, a forthcoming movie currently being filmed in New Jersey, which documents the life and times of legendary label Chess Records. Beyonce also joins the cast, playing Etta James in the film, while Adrian Brody tackles the role of Chess co-founder Leonard Chess. [Via Billboard.com]