Video! At Free Yr Radio at La Zona Rosa, SXSW gets its dance on. 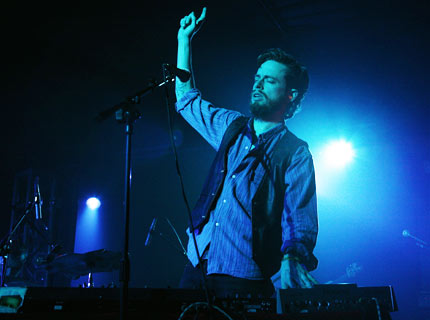 We strolled into Yeasayer’s set at the Free Yr Radio Party just as the Brooklyn-based quartet was blasting through a characteristic barrage of amorphous guitars and ominous chants as a thick base of ethereal undertones and reverbs rode just beneath the surface. Between the flailing hair of the band’s guitarist and bassist, singer Chris Keating bobbed about the stage clad in a black leather vest, as the crowd ate up tracks like “2080” from Yeasayer’s All Hour Cymbals.

Soon it was time for the night to rev into full effect, and the beat-thumping tunes of Simian Mobile Disco provided just the soundtrack. The duo — James Ford and James Anthony Shaw — took the stage and manhandled the decks and switches to a rhythmically-in-time series of seizure-inducing flashing lights. With beer cans hoisted to the sky, dancing, elated fans exemplified my kid-in-a-candy store feeling towards SXSW’s first night.