Watch Against Me! Go Acoustic

The Floridian punks are rolling out a new acoustic video every week from a show filmed last Thanksgiving in Chicago. 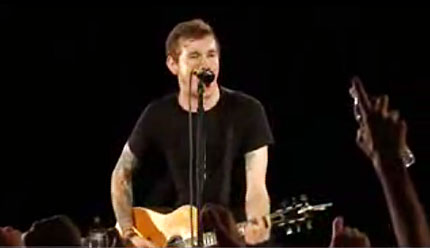 In a series of weekly posts to their label’s YouTube page, antiestablishment punk rockers Against Me! are releasing live footage filmed during a special acoustic set last Thanksgiving at Chicago’s Metro venue. Stripping down the raw, in-your-face sound of Spin’s Album of the Year, the searing masterpiece New Wave, the band is posting acoustic versions of many album tracks, as well songs from the band’s catalog. The latest is frontman Tom Gabel’s solo rendition of “Baby, I’m an Anarchist,” off of 2002’s debut full-length, Reinventing Axl Rose. Check out the new video below, as well as a full band rendition of “New Wave,” and visit the YouTube page for more videos in the coming weeks.
Against Me!, “Baby, I’m an Anarchist”: