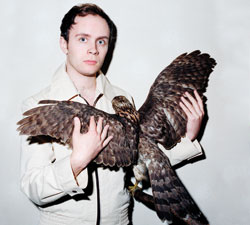 It takes a peculiar person to enjoy being interrogated by U.S. immigration agents. Someone, in fact, like Jens Lekman. “I said I was a musician, then one agent told the other one, ‘Check him out on Wikipedia,'” the 26-year-old Swede recounts gleefully at a Manhattan café. “So they started reading about me, and they got really into it. They started grilling me: ‘You’re a pop singer/songwriter? You put out three records? In the beginning, you were mistakenly known as Rocky Dennis?'”

Expect a full report on his next album, since these sort of random occurrences inspire many of Lekman’s droll compositions, which have tackled such topics as working in a bingo hall and nearly cutting off a fingertip. “Moments for the ages,” he calls them, adding, “I write very literally about my experiences.”

Already a Grammy-nominated star in his homeland, Lekman has been honing his heavy-lidded wit and Morrissey-goes-Broadway baritone since 2001, when he began self-releasing CD-Rs recorded in his apartment. He signed with American indie Secretly Canadian in 2003 and has released two albums Stateside; both became fast favorites with tweedy literary types, Belle and Sebastian fans, and, his favorite niche, lovelorn women. “I love love,” Lekman says. “That should be on my gravestone.”

Romantic saps will find plenty to appreciate on Lekman’s third full-length, Night Falls Over Kortedala, named for a dreary suburb of Gothenburg where he lived while making the album. Over tracks that twist doo-wop, Eurodisco, and schmaltzy strings into baroque pop, Lekman dates a lesbian (“A Postcard to Nina”), discards a girlfriend while a piano plunks merrily in the background (“I’m Leaving You Because I Don’t Love You”), and flirts with a deaf girl in sign language (“It Was a Strange Time in My Life”). Among the wit and quirk, however, there’s a constant, plaintive longing.

As he prepares to tour for most of 2008, Lekman hopes to shed some of that sadness. He has sublet the apartment in Kortedala and is currently couch-surfing until he moves to Australia after this string of shows. “I want to get a perspective on things,” he says, grinning. “And there’s a girl there. That’s all I know.” Good luck getting through customs.