About two hours before Mannequin Pussy take the stage at West Hollywood’s legendary Troubadour, the line for their free, headlining show (presented by Dr. Martens) already wraps around the block and down the street. There’s no chance everyone’s getting inside.

But just a few hours beforehand, the Philadelphia-based punk band was sitting at lunch mildly concerned about how many people would even show up. Only recently has the band been selling out similarly sized venues around the country.

As the three longtime, core members — vocalist Marisa “Missy” Dabice, drummer Kaleen Reading and bassist Colins “Bear” Regisford — look over menus at trendy eatery Great White, there’s a lot of reflection going on. It’s Mannequin Pussy’s last show of 2022, a year that saw them return to form after seeming poised to break out following 2019’s Patience. After the pandemic and a significant lineup change — founding member Athanasios Paul left and was replaced by guitarist Maxine Steen and touring multi-instrumentalist Carolyn Haynes — it would’ve been understandable for the group to take a minute.

“I’m just completely grateful that we could come back at all,” Missy says. “We definitely sought to be a band that could survive that break, but to not only have people who care about you coming back, but also all these new people discover you during that time… I just felt very grateful. It really could have gone the other way.” 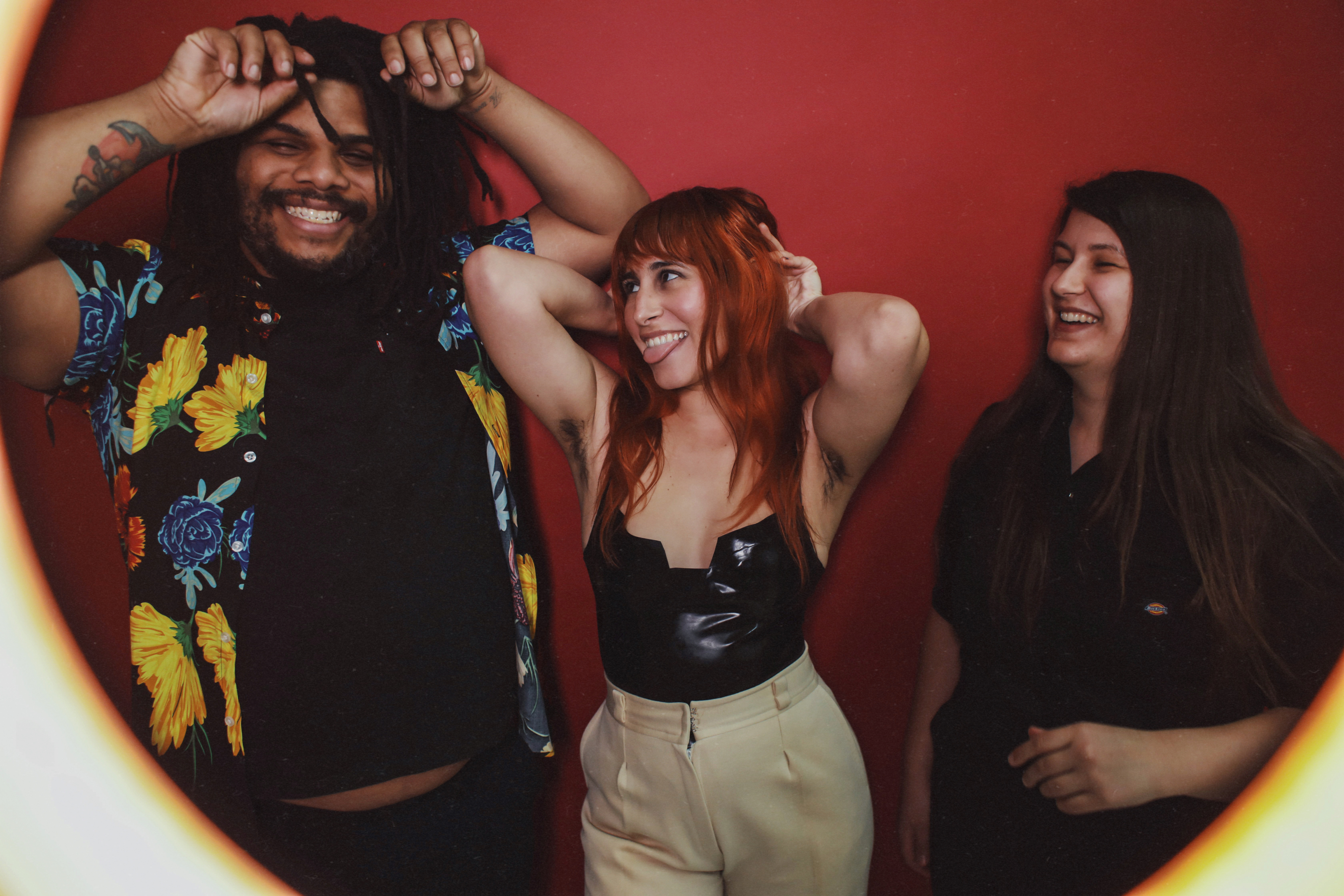 “I don’t think I took playing shows for granted before, but I definitely have a new appreciation for just being able to do that now,” Reading adds.

Mannequin Pussy are already reaching well beyond their peaks from before the forced break, having played several of the biggest festivals in America and the U.K. in 2022, while also headlining shows across both countries.

As a mostly female LGBT punk band, with tracks in a wide variety of subgenres, from classic hardcore to borderline emo and indie, they have never shied away from variety. From the band’s last album, Patience, which Dabice agrees is likely their “most accessible album,” mosh pits swell for heavy tracks like “F.U.C.A.W.” and “Cream.” A couple of tracks away on the record, “High Horse” and “In Love Again” would’ve fit right in on Hole’s Live Through This. Plus, every pop-punk/emo band from the last 20 years wishes they could get the crowd reaction Dabice consistently gets for the line “I still love you, you stupid fuck” to close the first verse of “Drunk II.”

Mannequin Pussy’s audience has grown without attracting too many unwanted members. And while old punkers may be discovering the band and liking what they hear, the band and its community aren’t ones to put up with people’s bullshit, and they’ve done a pretty thorough job of making sure new fans know bigotry of any kind, or generally acting like an asshole, isn’t welcome. In Missy’s eyes, it’s a mentality that has particularly endeared them to younger fans and artists.

“I think anger is a pretty universal feeling, and I don’t think any feeling belongs to one type of person when it’s something we all experience,” she says between sips of green juice. “But I also think that people sometimes try to hide their anger in ways that are detrimental to themselves, because you’re trying to force yourself to be OK with something that maybe you shouldn’t be OK with.

“But I also feel like maybe that’s why we’ve had the year we had — reaching so many new people without putting out any new music. The younger generation is fucking pissed, and they have every right to be. As the world continues to change and more people develop this class consciousness and moral consciousness, there’s anger that comes into that. And what better place for anger than the catharsis of loud guitars and drums?”

“The music is a vehicle for a lot of people to get their stories out, and now we’re just hearing better stories from other people,” Colins adds. “Like there’s that band Zulu, an all-Black hardcore band, and they’re not talking about the things you would have heard in that music style before them. I think people are more understanding now that you can’t just get this music from one set of people with one set of ideas, because you’re not really getting the full scope. It makes me happy to see all these new artists coming out that are nothing like what you would have expected. You can see a band that looks punk as hell, and then you find out that they’re this hard hip-hop group. It makes music stay exciting.”

In tandem with bands like The Armed, Destroy Boys, and Meet Me @ the Altar, Mannequin Pussy have become leaders of that new, genre-subverting movement. Even if the members look (more or less) like a punk band, their continued dabbling in all sorts of music is allowing them to go in any direction on their planned 2023 album. On one hand, Dabice finds the lack of genre-specific expectations freeing from a writing and creation standpoint, as she knows that a lot of the band’s fans appreciate this kind of range. On the other, she can’t help but feel like she’s still not getting the respect she deserves in the punk rock world, after a decade in the scene and three successful albums.

“I would say half of our discography is [punk or hardcore], but our most popular songs happen to not be,” she admits. “I think the majority of our sets are also really high-energy screaming, but then we’re also able to slow it down and sing for a bit. I think the purity of what a genre is has now expanded. It doesn’t have to be a pre-written sound. Everyone’s experimenting with all of it.”

Mannequin Pussy’s sound has certainly evolved. Technically starting over a decade ago as a duo of Missy and Athanasios Paul before adding Kaleen Reading in 2015 and Regisford a year later, the trio at lunch have grown as people perhaps even more than as musicians. Not only have they gone through the natural process of maturation (Kaleen, the youngest member, “finally” turned 30 recently), but they’ve learned to communicate and interact with people in ways they likely wouldn’t have if they didn’t pack themselves into a van for weeks out of every year.

Missy says: “Not only are we physically around each other when we’re on tour, but there’s also a spiritual aspect to it as well. There’s an energy aspect to it where you have to read each other’s moods, heart, desires, and the things we need. It also makes you realize that your words, your actions, and your moods have an effect on the people around you. You get a very intense look at all of that when you’re in this productive, collaborative relationship in a band.”

“I feel like I’ve definitely gained a lot more perspective about the scope of my world, because it’s easy to live in the bubble you grew up in,” adds Regisford. “We meet people from different socioeconomic backgrounds and places, and we get to see how they do things and what our art means to them. It’s humbling, because I feel like I’m just some kid from the northeast, but when some lady in Texas tells me that my music has brought so much light into her life… I don’t even know her experience, but the fact that it connects to her makes me understand that there’s so much more to us than just where you are at any given moment.”

As evidenced by the Troubadour crowd, Mannequin Pussy’s community is plenty strong. While the band was waiting for a table outside of Great White, a fan approached to ask for a photo. Getting recognized near a venue happens more often these days, but moments later there was a humbling encounter when a group of women handed their iPhone to Missy so she’d take a picture of them, and not the band.

Perhaps the biggest change for Mannequin Pussy in 2022 had nothing to do with music. For the first time in a long time, Dabice is a single woman. As for the impact on the band and its upcoming album, the end of her relationship changed the music in a couple of ways. She had to sit alone with herself, her feelings and her thoughts for the first time in quite a while. That led to some serious introspection and quite a bit of self-discovery among the band.

Dabice’s sudden lack of a steady sexual partner has also impacted the topics she wrote about for the new album.

“I don’t want to be so presumptuous as to say that longing and horniness are universal emotions,” Missy continues. “I don’t know that everyone experiences them, but this band does. It’s been a really great way to experiment with language and lyrics, where something might be a little distasteful, but it’s still poetry. It’s gonna be dirty, but it’s also gonna be angry. It’s gonna be a rocker, but I also wrote some of the most tender songs we’ve ever done.”

Mannequin Pussy is embracing the differences of being an increasingly successful band in its 30s, compared to life as an “up-and-coming” punk band full of rebellious 20-somethings. Things aren’t the same as when Romantic came out in 2016 (much less their self-titled debut album two years prior), but change isn’t necessarily a bad thing. The core of the band has gone through so much at this point that a little uncertainty going forward doesn’t shake them.

Some things never change: as the band’s popularity grew this year, new people found reasons to get offended by their name and new “industry types” suggested changing it, to better the branding, and their SEO, and whatever else.

“Maybe we’ll just change the band’s name to ‘Pussy,’” laughs Missy. “I mean, it has to be ‘Mannequin’ that’s offending people, right? It’s a weird word that’s kind of hard to spell.

“‘Pussy’ obviously can’t be the thing that’s making everyone uncomfortable.”