One night recently at the Kia Forum in Inglewood, California, Ben Harper got a surprise visit backstage from Harry Styles, headliner for their 12-date (which was originally scheduled to be 15 but three were canceled due to illness) residency at the old arena. He arrived bearing a very special gift: an ancient Roland CompuRhythm drum machine, a contraption heard on generations of classic pop and dance hits in the 1980s and ’90s, from Hall and Oates to Blondie to Culture Club.

“He just brought it into my dressing room and said, ‘You need this,’” Harper recalls with a laugh. “I didn’t know drum machines could be this good. The beats are so futuristic. It’s so sick.”

Retro-future beats aside, the connections between Styles and the journeyman singer-songwriter-guitar hero are rooted in a tradition that is less about computers than something more organic: songcraft. When Styles released his self-titled debut solo album in 2017, one of his first gigs was at the 500-capacity Troubadour in West Hollywood — the same club where Harper performed his first showcase as a new artist on Virgin Records in 1994.

Harper met the former One Direction singer when Styles invited him to play on “Boyfriends,” an understated, gently psychedelic track on the hit album Harry’s House. That led to Harper being asked by Styles to be the opening act at his long run of shows at the Forum. Intrigued, Harper accepted, even if it meant facing the tightrope of any act opening for a major star — the possibility of total rejection from the headliner’s most fanatic listeners (or worse, no reaction at all). 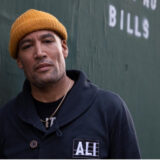 “I’ve heard people singing songs,” Harper says. “His fans are incredible, and they gave me a chance on opening night. They gave it a shot, and I just can’t thank his fans enough for actually letting me through the door. I felt welcome there.”

At the Nov. 12 show, Harper stepped onto the Forum stage alone. Wearing a pink beanie and a white sweater streaked with color, he performed an eight-song set, much of it solo. He was then joined by a four-person choir for the a cappella “Below Sea Level,” which opens his new album, Bloodline Maintenance (which is currently nominated for a Grammy for Best Contemporary Blues Album).

During the song “Waiting on An Angel,” the arena lit up with fans holding up their glowing cell phones. Harper also included a cover of “Boyfriends,” which Styles did not perform that night. Throughout, he chose to strip things down as a contrast to what he calls the “extraordinary exquisite” production of Styles’ performances. “I wanted to counter it with songs in their purest forms — basically just me and a guitar. I rolled the dice on it, hoping that what would connect most directly was the intimacy.”

That also meant reaching back to songs from Harper’s earliest albums from the 1990s, when he was the same age as much of Styles’ audience is today. He plucked at the same vintage Martin 00-18 acoustic he played on those records (and at the “Boyfriends” session), even though that guitar is now on permanent loan to his daughter, Harris, 23, who joined Harper and her brother C.J., 25, onstage for her song “Longest Apocalypse.”

“I would never in a thousand lifetimes bring my kids into an environment they weren’t ready for,” Harper says. “Harris is ready, and she’s been ready for a long time.”

Later, during his headlining set, Styles thanked Harper and told the crowd “I would sit and listen to that man play instruments for a worrying amount of time.”

Music and family connections have been part of Harper’s life since he was born. Both his parents were musicians, and his grandparents founded the Folk Music Center in the 1950s in Claremont, where he grew up and learned to play and repair instruments. On the cover of Bloodline Maintenance is a picture from around 1974 that shows him as a toddler with his late father, percussionist Leonard Edward Harper II.

Over the years, the Harper has brought home three Grammys and been nominated on three other occasions. He says it’s always meaningful whenever his name is included, and the latest nomination still “feels like the first time” — though he won’t be able to attend due to previously scheduled live dates in Australia. The category of “Contemporary Blues” may be a bit of a catch-all for an album that travels through genres of rock, funk, folk and blues — but the connecting thread is always present.

“Really when you extract the bones of the music I make, the DNA of it is blue — it’s blues,” he says.

For Harper, the connections are not just about sound, but the message. The lyrics on Bloodline Maintenance are deeply felt and socially conscious as he dives into some deep, sticky funk on the smoldering “We Need to Talk About It” with rage against those who want to sweep away public acknowledgment of America’s history of slavery. “Whoever said time heals all wounds / Wasn’t a slave I’m guessing / Hundreds of years / That’s just too long of a lesson … we need to talk about it!”

That song and others are part of a tradition of protest within many of Harper’s songs through the years, including the title track from 2016’s Call it What it Is album. That one listed the names of several unarmed young Black men killed by police — a troubling roll call that helped ignite the Black Lives Matter movement.

“It’s never not a part of how I wake up,” Harper explains. “Listen, I’m black. My dad is Black, my mom is Jewish. But when I walk into the room, I’m a Black man. Every morning I walk out of my house, I’m a Black man with Black man struggles. If you wake up Black in America and don’t recognize the struggle, shame on you. How could America have landed in the lap of Donald Trump for fuck’s sake. And that’s the blues right there. That’s contemporary blues — inner city blues.”

Harper turns the volume down a bit on his next album, the acoustic-based Wide Open Light, due to release in June. It includes “Trying Not To Fall In Love With You,” which he performed at the Styles shows singing wistfully at a piano. Other songs are spare and organic, with Harper’s voice usually accompanied by acoustic guitar. One track is a duet with Jack Johnson.

“I haven’t been that raw and that exposed on record — just me and guitar — for an entire album ever,” Harper says. The album lands somewhere in the vicinity of Bruce Springsteen’s hauntingly raw and acoustic Nebraska, a favorite that Harper calls “one of the greatest records of all time.”

For Harper, songwriting remains a calling and being invited to share his music to another generation of listeners at the Styles concerts was like a return to his earliest days onstage.

“It really did feel like something was happening all over again — from introducing young people to my songs to playing an opening gig,” Harper says. “It just was really refreshing. I’ve loved every minute of it.”