Some of the top names in country and roots music have joined forces for Live Forever: A Tribute to Billy Joe Shaver, due Nov. 11 from New West Records and Pedernales Records. The album was produced by Charlie Sexton and Freddy Fletcher and is led by Willie Nelson and Lucinda Williams’ cover of Shaver’s “Live Forever.”

Shaver, who died at 81 in October 2020, was a figurehead of the “outlaw country” scene and was known as much for his own artistry as for popular versions of his songs covered by Waylon Jennings, Elvis Presley, Kris Kristofferson and Johnny Cash.

“His influence on the greatest of artists is what inspired this project,” Fletcher writes in the album liner notes. “The album is a testament to his words and their deep impact on wonderful songwriters and performers. He’s a hero to so many, and we are honored to pay homage to his legacy.” 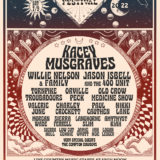