When people talk about “video games as art” or “video games for people who don’t play video games,” they’re usually referring to high-concept titles that involve little gameplay while focusing on an emotional narrative and well-developed characters.

We Are OFK is just that in a lot of ways, except it’s all focused around the origin story of the virtual indie pop band OFK. Created by Teddy Dief (who previously designed Hyper Light Drifter and is also one of OFK’s leading voices), the title developed and published by Team OFK is part Making the Band and part relatable drama, with the episodic narrative coinciding with the release of the digital band’s debut EP.

Now that the first two episodes (and EP tracks) are available, SPIN spoke with Dief, Co-Art Director and Character Designer Nafisah Tung, and songwriters and producers Luna Shadows and Thomas Powers about the new indie title. 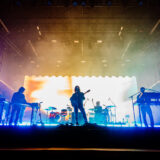 SPIN: What drew you to the episodic format for We Are OFK?

Teddy Dief: The core of the project is OFK the band, an actual music project, so the game took shape around that. The idea was for fans of our music to connect to the band members on a personal, vulnerable level in a way games are so powerful at. I knew we wouldn’t be making some epic, violent action game if we were gonna connect with as many of our music’s fans as we could. It had to be a design that you could never feel “bad” at. As much as I encourage people who “don’t play games” to explore the art form, we wanted to maximize people’s comfort here. I made a really difficult action game before, Hyper Light Drifter, but on this we pushed the idea of what it means to be approachable. No jumping, no “Game Overs,” no puzzles — honestly it was really hard for me as a designer to force myself to think that way and remove any ideas that might intimidate someone. We wanted anyone who watches Netflix to be able to pick this up.

The episodic structure felt like a perfect fit to drop our EP with one episode per song and one music video per episode. I wanted to bring an event to games that I see in music and TV all the time — a new drop every week. This big moment where you get together with friends every weekend to see what happens next — big watch party energy. I’ve still never seen that weekly drop in a game.

How did you decide on what the band and EP for the game would sound like?

Thomas Powers: We took a very script-informed and story-forward approach to the band’s sound, as we had access to the original outlines, art concepts, and character briefs. Before we even stepped foot in a studio, we spent many hours deep-diving into the evolving script, studying everything about the characters from their favorite foods to their texting styles. In order to write songs from their perspectives that were consistent and authentic, we heavily cross-referenced the details of the creative content that Teddy provided for us very early on in the process. From there, the band’s sound became self-explanatory.

Luna Shadows: Sometimes, the process reversed and the creation of the music resulted in an adjustment to the story. For example, Itsumi was originally written to be a cellist. Several songs later, the productions were filled with all these energetic synth hooks, but the band had no synth player. Teddy was extremely receptive and collaborative throughout the entire process, and they embraced the opportunity to re-write Itsumi as the band’s synth star. Overall, creating a virtual band is just the same as producing a band in real life. You must have a north star, an authentic voice, and a sonic palette that originates from a singular source. Thomas and I have been through this process for our own projects and with other artists many times, so we just did what we always do, which is to listen intently with curious ears and to find those guiding lights of musical identity.

What other mediums could you see OFK expanding into next?

Dief: We created the game to be a first introduction to this band of characters we love and that we are. It took 4.5 years to bring them to life, and now they get to live. We want OFK to tour. We want them to play little shows around LA. They’re not trapped in the video game. That’s just how you meet them. Now you can go joke with them on Twitter or duet with them on TikTok or whatever. They’re out there! I’d love to share more stories and windows into their lives. We’ve had some talks about TV. My co-writer, Claire Jia, and I could write a TV show or a comic, but the band needs to live a little first. We Are OFK tells their story right up until present day — the release of their first EP — so we can’t tell more stories until they’ve made some more music, played some shows, or embarrassed themselves at a party.

What kinds of inspirations did you draw from for creating We Are OFK?

Dief: Narratively, we started writing as a sitcom — friends hanging out in an apartment, at work, and a bar. I was looking at shows like New Girl and Insecure. Claire had been working for Fresh Off the Boat and Awkwafina is Nora from Queens. Our script gradually got more somber and darker. The more we thought of OFK as real people who would exist in the real world, the more we wanted to relate to their dark moments as much as their goofball ones. It was like “OK, they’re gonna get drunk and do antics, but they’re also gonna lay on the couch, stare at the ceiling and feel lonely.”

Shadows: At the same time that we received the scripts, art concepts, and master plans, Teddy also prepared a detailed list of references and inspirations for each song. We spent a ton of time listening to their inspiration playlists, taking notes, and finding the common threads between the songs. Our general launch point for the band’s sound was to synthesize electro/synth pop, indie/alternative, K-Pop, J-Pop, and indie electronic. Lyrically, we constantly found ourselves circling back to the script, sometimes quoting characters directly, and often free-writing in their voices before implementing traditional song structures.

Powers: A combination of Teddy’s references, script-focused brainstorm sessions, and our own musical backgrounds and intuitions provided almost all of the inspiration necessary to create these songs. The story is about a group of independent artists creating music in Los Angeles, which is what we actually do on a day-to-day basis. The process was more or less a continuation of what we already do as artists and producers, except we meticulously substituted our own perspectives for these fictional voices. Because this was an indie game with a small team, we were incredibly close to the inner workings. By the time we were in the studio, we were on a Slack channel with an incredible group of people who deeply cared for the game. That was all the inspiration we needed.

Nafisah Tung: Each band member is styled in a way that expresses their personalities and struggles.

Itsumi is a mix of vaporwave meets health goth. Her signature shades and jacket are nods to her energetic style and are also slight anime references. Her shades are inspired by Vash of Trigun and her jacket is inspired by Kaneda of Akira.

Luca’s inspirations went through quite a lot, so they’re not as clear anymore, but he is largely characterized by his color choice and accessorizing. He’s supposed to give off a dreamy and calming vibe, with his signature space print Saturn shirt as the focal point.

Jey’s outfit was designed to speak to her strong personality. Her jumpsuit and lapel pins are to evoke the feeling of a military officer, but as a businesswoman. We went through a couple designs that were kind of Burberry-like, but ultimately settled on something more straightforward.

I often joke that Carter is if we took the essence of Jaden and Willow Pinkett-Smith and rolled their fashion choices into one person — but also make it comfortable and easy to lounge in. Their sneakers are supposed to be heavily Versace inspired

Is there anything else you want to add about We Are OFK?
Dief: What I love about LA is that I’m always meeting artists from other creative mediums, and OFK couldn’t become real unless we had people authentically coming from all these different industries and crafts, like pop music, animation, games and live TV. LA can feel rather vapid at times — sort of an art-capitalist endgame — but there’s real humans here, finding each other and helping each other to grow and survive. That part of LA is in OFK’s blood. It’s how we found each other.