On Friday, Big Thief announced that they’d be playing in Tel Aviv, Israel, which happens to be the city where bassist Max Oleartchik is from. Following a backlash to their statement where they defended performing there, Big Thief have canceled those shows. In a new statement, they called apologized for the “recklessness and naivete” of their previous one.

“We would like to start by clarifying a few things from our first post,” the band wrote in the new statement. “When we spoke of loving ‘beyond disagreement’ and not knowing ‘where the moral high ground lies,’ that was in specific referred to playing shows in Israel during a time where BDS (The Boycott, Divestment and Sanctions movement is a Palestinian-led movement promoting boycotts, divestments, and economic sanctions against Israel) is calling for a cultural boycott,” starts the post. “This was not in reference to the Israeli occupation and the displacement of Palestinians.”

“To be clear, we oppose the illegal occupation and the systematic oppression of the Palestinian people. We believe in total freedom and self-determination for all Palestinians”.

“Our intent in wanting to play the shows in Tel Aviv, where Max [Oleartchik, bassist] was born, raised, and currently lives, stemmed from a simple belief that music can heal. We now recognize that the shows we had booked do not honor that sentiment.” 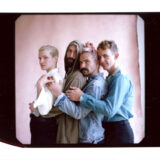 Continuing, the band also wrote that they “oppose the illegal occupation and the systematic oppression of the Palestinian people.”

Following the announcement of the cancellation, Barby, the venue where the band was supposed to play, released a statement on their Facebook page, ripping the band for their decision. “Your cancellation you just made me sad for you bunch of miserable spineless musicians who are afraid of their own shadow,” it read. The band had previously played at the venue in 2017 and were supposed to play in 2020 prior to the pandemic.

The Palestinian Campaign for the Academic and Cultural Boycott of Israel released a statement of its own, praising the band for its decision. “The apartheid Tel Aviv venue Barby, where US band Big Thief was due to play next month, has announced the band’s cancellation of the shows. We warmly welcome this decision,” the organization wrote.