What is believed to be the last footage of Screaming Trees frontman Mark Lanegan filmed before his death in February is spotlighted in a new video for the mournful song “Hireath,” which is drawn from Lanegan’s 2021 collaborative project with former Icarus Line frontman Joe Cardamone, Dark Mark Vs. Skeleton Joe.

“The rough definition of ‘hiraeth’ is something like nostalgia or strong longing for a life, place or time, one that may have never even existed,” Cardamone tells SPIN of the Welsh word, for which there is no direct English translation. “When I was sending Mark batches of instrumentals for what was to become our album, ‘Hiraeth’ in particular stopped him. We were listening in the studio and after it was done playing he said, ‘It’s beautiful, bro. Are you sure you don’t want to keep it for yourself?’ I told him I had definitely thought about it but in the end I wanted him to have it. After he laid down his vocal, I knew it was the right call. His lyrics and melody on this cut in particular really moved me and in a way became the centerpiece to the album. It’s a song that is just filled with unfiltered love. Nothing guarded. No damage involved. Truly one of the most moving pieces of music I have ever been a part of.”

The haunting video was shot in October 2021 near Lanegan’s adopted home base of Killarney, Ireland, after he had recovered from a near-fatal bout with COVID-19 that temporarily left him in a coma. “This was a chance to spend time together and for Mark to show me his new hometown,” Cardamone reflects. “He looked so genuinely happy there — more so than maybe I ever saw in Los Angeles. Surrounded by nature and peace. It’s a breathtaking corner of the world. On the last day, we all decided to visit a side of the lake that Mark had yet to explore. We walked and talked through the wood for several hours and broke out the camera at the very end. I had always hoped to do some kind of visual for ‘Hiraeth,’ but we were almost out of time at this point and just hanging out took priority. The footage we ended shooting is the last footage of Mark as far as I know.” 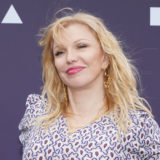 These vibrant scenes are juxtaposed with imagery from throughout Lanegan’s life and career, including a 2019 video for his solo song “Stitch It Up” featuring the ‘90s-era MTV character Jimmy the Cabdriver (Donal Logue, a longtime friend who encouraged Lanegan to move from Los Angeles to Ireland). “They say when you go, your life flashes before your eyes,” says Cardamone. “It was really important to me to try to put my love for Mark into this film. While cutting it, we knew it was going to be the last visual for this collection. I think he would have liked it.”

Lanegan died on February 22 at the age of 57 from as-yet-unannounced causes. He told SPIN last year of Dark Mark Vs. Skeleton Joe, “more than any other record I’ve ever made, it totally has the feel of a time and a place for me. Because we did the bulk of it right in the midst of the pandemic, when things were getting crazy in Los Angeles and I was getting, uh, too close to the sun.”

In that same interview, Mark Lanegan said he was demo-ing songs for his next solo album, the status of which is unknown. As previously reported, the artist will be heard on The Afghan Whigs’ upcoming album, How Do You Burn?, which is out on September 9 through Royal Cream/BMG.