The 2022 Grammy Awards were finally held on Sunday night, two months and 300 miles removed from the original plan. The 64th annual ceremony, originally set for late January in Los Angeles, was pushed back after COVID-19 cases spiked in early 2022. It was also moved to Las Vegas for the first time, held in the MGM Grand Garden Arena, with The Daily Show’s Trevor Noah hosting for the second year in a row.

The Winners (and the Ties)

The 2022 Grammys broadcast kicked off with Silk Sonic, the throwback R&B duo of Bruno Mars and Anderson .Paak, on their current home turf: They’ve been in a Vegas residency at the nearby Park MGM theater since February. The group’s opening medley featured the appropriately Vegas-themed “777,” “Skate,” and a taste of “Hot Music,” the 1989 house music classic by S.O.H.O. Silk Sonic also turned out to be one of the night’s most frequent winners, landing all four the awards they were nominated for, including Song of the Year and Record of the Year for “Leave the Door Open.” When accepting the latter award, .Paak flashed his trademark grin and said, “We’re trying to remain humble, but in the industry we call that a clean sweep.”

The biggest winner of the night was Jon Batiste, who took home five awards, including Album of the Year for We Are. Batiste shocked the industry in November when he led the field with 11 nominations — for some perspective, only two people have ever earned 12 nominations in one year, and one of them was Michael Jackson after Thriller. Batiste is best known as the musical director on CBS’s The Late Show with Stephen Colbert, but We Are was an underdog for Album of the Year. It has peaked at No. 86 on the Billboard 200, while every album in the field has charted in the top 10. So Batiste’s big moment felt like an echo of CODA’s triumph at the Oscars last week: The big winner had wide appeal and a big heart but was also, by most metrics, one of the least popular nominees. 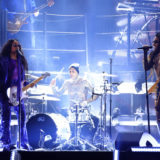 H.E.R. Rocks Out at Grammys With Lenny Kravitz, Travis Barker

In addition to making R&B with a throwback sensibility, Silk Sonic and Jon Batiste have something else in common: Each had to share one of their awards with a competitor. There have now been 31 ties in Grammy history, with two nominees collecting an equal number of votes (by comparison, there have been only six ties in Oscar history). So Silk Sonic shared Best R&B Performance with Jazmine Sullivan, who won her first two Grammys last night, after collecting 15 nominations since 2009. And the Best Score Soundtrack for Visual Media was shared by Carlos Rafael Rivera (for The Queen’s Gambit) and Jon Batiste, Trent Reznor and Atticus Ross (for Soul). The only tie in one of the Big Four general categories occurred in 1978, when Barbra Streisand’s “Evergreen” and Debby Boone’s “You Light Up My Life” tied for Song of the Year.

Olivia Rodrigo was the only artist who had a shot to sweep the Big Four categories in 2022, which has happened just twice in Grammy history: Christopher Cross in 1981 and Billie Eilish in 2020. Rodrigo missed that mark, but she took home three awards, for Best New Artist, Best Pop Vocal Album, and Best Pop Solo Performance. Eilish’s reign as Grammy darling came to an end this week, however, as she came up empty for her seven nominations.

Foo Fighters, who won all three Grammys they were nominated for on Sunday, had been scheduled to perform. But after the death of drummer Taylor Hawkins nine days before the ceremony, the band decided to cancel all scheduled concerts, including their Grammys slot. Hawkins was acknowledged with a video package at the beginning of the annual In Memoriam segment, but the most touching tribute came, surprisingly, from Billie Eilish. She sang “Happier Than Ever,” one of the most beautifully staged performances of the night, in a shirt with a picture of Hawkins on the front and his last name written on the back.

It’s an awards show cliché to begin a performance quietly at a piano, then stand up and walk to center stage as the tempo picks up — and no less than three artists made that move on Sunday. Brandi Carlile did it best, transitioning from piano to guitar as “Right On Time” reached its cathartic climax. Then Jon Batiste played a flashy piano instrumental before dancing and howling through “Freedom.” But it almost felt like a comedy bit when Justin Bieber started out his bawdy R&B hit “Peaches” as a piano ballad.

A couple of performances featured surprise guests. First, H.E.R. was joined on “Damages” by Jimmy Jam & Terry Lewis, nodding to the fact that her song sampled Herb Alpert’s 1987 hit “Making Love in the Rain,” which they wrote and produced. Then, H.E.R. played a drum solo, switched to guitar, and was joined by Lenny Kravitz and Travis Barker for an explosive rendition of Kravitz’s “Are You Gonna Go My Way.” Ukraine’s president Volodymyr Zelenskyy gave a brief pre-recorded speech, followed by John Legend performing a new song, “Free,” released the night of the ceremony, with Ukrainian singer Mika Newton and Ukrainian poet Lyuba Yakimchuk.

Of the big cinematic performances with high production values, Olivia Rodrigo shined the brightest, giving perhaps the definitive live performance of “Drivers License.” BTS’s spy movie-themed “Butter” performance and Lil Nas X’s choreography-heavy medley were both entertaining, but they echoed the artists’ many previous live TV appearances. And while the retired Tony Bennett made a touching move by filming a pre-taped introduction to Lady Gaga, who performed two songs from their album Love For Sale, Gaga’s hammy approach to singing Cole Porter is a lot less charming without Bennett there to ground her.

Nas’ first Grammy performance was a career-spanning medley that ranged from his 1994 debut, Illmatic, to his Best Rap Album nominee King’s Disease II. Unfortunately, it felt like a rushed series of snippets that didn’t quite cohere or demonstrate why he’s one of the most accomplished and influential emcees of all time.

And the night ended with two anticlimactic country performances that felt more like afterthoughts than a proper finale. Carrie Underwood frantically waved her arms in front of a wind machine while singing her new single “Ghost Story.” Then the show closed with the great Maryland duo Brothers Osborne performing an album track, “Dead Man’s Curve,” to a room that didn’t know who they were enough to reciprocate the band’s galloping energy.

Throughout Sunday afternoon, as Grammys were awarded in a smaller ceremony before the televised broadcast, social media backlash kicked up over a couple of awards. SOJA, a band of predominantly white musicians from Arlington, Virginia, won Best Reggae Album over veteran Jamaican artists Spice and Sean Paul. And Louis C.K. won his third Best Comedy Album award, but his first Grammy since 2017, when he admitted to exposing himself to multiple women without their consent.

It’s not unheard of for artists to miss their own Grammy wins (Carole King was at home with a 10-week-old baby the night Tapestry won Album of the Year). But Kanye West, who was nominated for five awards, including Album of the Year, was uninvited from the Grammys in March, following a series of controversial statements and social media posts. In fact, three days earlier, he’d been temporarily suspended from Instagram for repeatedly posting slurs regarding Grammys host Trevor Noah. West won two awards on Sunday, both before the televised ceremony. With West and Jay-Z both taking Best Rap Song for “Jail,” they’re now tied for the most decorated rapper in Grammys history with 24 awards each.

When Justin Bieber’s Changes was nominated for Best Pop Vocal Album in November 2020, he complained on Instagram that he’d been put in the wrong genre. “Changes is and was an R&B album. It is not being acknowledged as an R&B album which is very strange to me,” he wrote. (He ultimately lost the award to Dua Lipa.) This year, Bieber was once again up for Pop Vocal Album and two other pop categories, but he got a small victory: his first nomination in an R&B category. However, it was Best R&B Performance, the award that went to both Silk Sonic and Jazmine Sullivan. In fact, Bieber lost all eight awards he was nominated for this year.

Olivia Rodrigo offered a charming childhood anecdote while dedicating her Best Pop Vocal Album award to her parents: “When I was nine years old, I told my mom I was gonna be an Olympic gymnast, even though I could barely do a cartwheel. And she thought I was joking, but I was super defensive. So the next week when I told her I was gonna win a Grammy, she was very supportive, even though I’m sure she thought it was just a little kid pipe dream. But I wanna thank my mom for being supportive of all of my dreams, no matter how crazy.”

Baby Keem seemed genuinely shocked and elated to win Best Rap Performance over heavyweights like Drake, J. Cole, Cardi B, and Megan Thee Stallion, saying, “Nothing could prepare me for this moment tonight.” While accepting Best Country Album, Chris Stapleton noted that it was his twin sons’ fourth birthday, giving a poignant speech about the missed birthdays and other sacrifices that all the musicians in the room made to get there. Stapleton is only the second artist in Grammy history to win Best Country Album thrice, after the (Dixie) Chicks, who’ve won it four times.

By far the most memorable acceptance speech moment belonged to Doja Cat and SZA, who both received their first Grammy when “Kiss Me More” won Best Pop Duo/Group Performance. SZA slowly approached the stage on crutches, confusing viewers who had no knowledge of a recent injury. (In a post-show interview, SZA explained: “I fell out of bed. I’m just clumsy. … It was in the middle of the night, and I fell very, very wrong.”) By the time SZA reached the mic, Doja Cat finally appeared, explaining her lateness: “I have never taken such a fast piss in my whole life.” Over the past two weeks, Doja Cat has repeatedly tweeted that she plans to retire from the music industry after finishing her current touring and promotional obligations, following some fan backlash during a recent South American tour. But Doja paused for a moment during her Grammy speech and seemed visibly moved by the moment, saying, “I like to downplay shit, but this is, uh. … This is a big deal.”