Former Black Crowes drummer Steve Gorman is suing fellow founding members Chris and Rich Robinson as part of a long-running dispute over his request to examine documentation to confirm the accuracy of his royalty payments and share in income as part of The Black Crowes Partnership. The suit was filed yesterday (March 30) in Los Angeles Superior Court.

Gorman joined the Crowes in 1987 and formed a legal partnership with the Robinsons in 1991. Said partnership has collected royalties for the group ever since, but over the past five years, Gorman claims he has been repeatedly denied in his attempts to obtain detailed statements, which he is entitled to do under both the terms of the partnership agreement as well as California law.

According to the suit, Gorman has instead been given documents by the Crowes’ attorneys showing “various unexplained deductions” from his royalties, “including deductions for partnership expenses described as ‘management commissions,’ ‘attorneys’ fees’ and ‘overhead.’” It claims the Crowes “have not provided details on these purported expenses that are deducted from [Gorman’s] royalty payments, nor have [the Crowes] explained how these deductions comport with” the band’s partnership agreement.

The suit further seeks Gorman’s share of any royalty payments that may have been withheld during this time as well as the payment of all future royalties through Sound Exchange, rather than through the partnership directly. 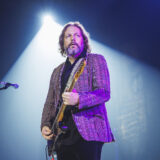 In a band rife with interpersonal drama and frequent lineup changes, Gorman, 56, was a constant presence until he left the Crowes in 2001. He rejoined in 2005. The Crowes broke up in 2014 was not involved in the group’s reunion in 2019 and subsequent 2021 tour, during which it belatedly celebrated the 30th anniversary of its 1990 debut album, Shake Your Money Maker. Gorman released his autobiography, Hard to Handle: The Life and Death of the Black Crowes–A Memoir, in 2019, that detailed his time in the band.

“For more than five years, my attorneys and I have made repeated requests to review the Partnership’s books to confirm the accuracy of royalty payments and my share, but Chris and Rich have consistently ignored my rights under the Partnership Agreement,” Gorman said. “I regret that it has come to this, as I remain incredibly proud of the music we created as a band, but their conduct has left me with no choice but to ask a court to order them to give me this information, which I’m entitled to under our partnership agreement and the law.”

“Mr. Gorman’s rights under the partnership agreement are crystal clear,” Gorman’s attorney Michael Mortenson of Mortenson Taggart Adams LLP, said in a statement. “He is entitled to review the partnership’s financial information and confirm his earnings, but our repeated requests to do so have been denied.”

A rep for the Robinsons didn’t immediately respond to SPIN‘s request for comment on the suit.