Welcome to the third edition of Difficult Fun! Each month, SPIN will spotlight the best punk on the planet and discuss it here, with the ambition of challenging preconceived notions of what the four-letter word actually means and, ideally, entertaining readers in the process. Purists, piss off! Everyone else, enjoy.

This is a column concerned with contemporary sounds, which means it is ultimately a column about the ways in which music is shaped by the current moment. (Consider this your disclaimer. Skip below to the hot tracks if your brain has smoothed over the last 15 months.) Lately, there’s an obsession with returning to “normalcy” in America: bars, clubs, restaurants, and stores are slowly beginning to reopen, which means “normalcy” is tethered to capital; the idea that the only way to sustain the status quo is to support an economy in decline. No wonder punk has never been interested in maintaining familiarity. It feels a lot like apathy. In fact, “normalcy” strikes me as a flowery conception that only truly benefits a small sliver of the population: those who live free from everyday gender, race, and class oppressions, and those who don’t care much for the people who do. It sucks.

Selfishly, of course, I do miss some aspects about our collective “normalcy.” Namely, the gigs of the before-times. I miss a sticky, vibrating floor, sweat colliding with other sweat, the heat of a poorly insulated warehouse or basement gig, the distortion of a raucous PA system that should’ve been put out to pasture many summers ago and yet, continues to endure. I miss the hardcore gig, the noise gig, the post-punk gig, the gigs that are impossible to recreate outside, in the daylight, six feet apart. (Interestingly enough, masks have always been a fixture, both literal and metaphorical, and can remain.) I’m sure those shows will return, and soon, but until then, I’m learning to lean deep into the most abrasive sounds, the ones that never sounded like “normalcy” and never will. There are bigger issues that require resolving, anyway, but please, Satan, give me a good punch to the face in the pit. And soon. My body is yearning for it. These tracks are proof. 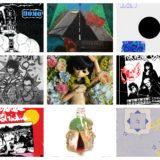 Much has been written about late-’70s, early-’80s punk – hell, if 1977 is the year punk broke, the years that immediately followed were instrumental in its global development. But far too often, punk’s nascent era is retroactively limited to its particularly glamorous urban geography: there’s U.K. punk, there’s New York punk, there’s Los Angeles punk, D.C. punk and everywhere else can fuck off. Of course, punk is more than the bands who’ve been martyred in the decades that followed, turned into a popular t-shirt design, manufactured in sweatshops and sold in a Target’s discount bin. There was great punk cropping up everywhere. (If you own more than one Killed by Death comp, my apologies for the condescending description. Why are you reading this, anyway?) Case in point: Beex, a Virginia punk band fronted by the incomparable Christine Gibson, born out of the shadows of one of the scene’s first-ever punk bands: Ricky and The White Boys. Reissued by the Richmond label Beach Impediment Records, Beex’s The Early Years 1979 – 1982 is a collection of the oft-overlooked band’s earliest studio sessions, including some that have never before been released – the perfect gift for lovers of melodious punk that doubles as an educational opportunity. What could be better?

Veins Feel Strange is Psychic Graveyard’s second album on Deathbomb Arc. and it’s the heaviest electro-noise release I’ve heard in a minute – shocking if only because there isn’t a single guitar on it. The band, which features members of Arab on Radar, Some Girls, Chinese Stars, noise rock bands Doomsday Student and All Leather (if any of us can agree on what “noise rock” actually means), delivers static-y discomfort, emboldened by a distorted monotone vocal delivery that presents like a radio transmission from hell. If the track “Word Machine” is any indication, they are the kind of band that opens for the band you actually bought tickets to see and quickly realize are much better than the headlining act. See them next year, you’ll know what I mean.

According to Bandcamp, Resist to Exist قاوم لِوجودك is a 36-track compilation released by Bristol, U.K. label Avon Terror Corps in collaboration with Ramallah, Palestine’s Exist Festival—the country’s first electronic music festival—a whirlwind of Western and Arabic performers come together for a cause. (All proceeds go to the Palestinian Medical Relief Society, too.) The release embodies a feeling of unsafety and violence: a poignant listen for anyone curious about the human rights atrocities in Gaza. Sonically, it is expansive: moving from kaleidoscopic experimentalism (Tzii’s “Violent Inequal System of Assholes) and slow-burn industrial (AbdallahDabbas, “ThhhhhhhawRA”) to space-y post-rock (Erorrist, “The Destruction of a Legacy”) and harsh noise (Dirar Kalash’s “Stone Dancer.”) Consider it an album of the year contender in the form of a compilation. And Free Palestine.

It seems impossible that it has taken three months for Difficult Fun to include its first garage punk release from Australia, but I promise, after this moment, there will be no shortage. Mini Skirt hail from Byron Bay; Casino is their debut LP on German label Erste Theke Tontraeger. It’s 10-tracks of pleasant fury (at the state of the world, at the British colonization of Australia, at you and me and all our apathetic families, at macho bullshit, at the powers that be – particularly in the first minute of “Brigantine St.,” where vocalist Jacob Boylan shouts, “I wanna believe in the revolution / I wanna believe in my contribution / But the bastards keep winning.” That they do.) And while Casino technically dropped in May, every day is May Day under late capitalism, right? I simply believe music sounds better in a pissed-off (and probably the other kind of pissed, too) Aussie accent atop The Saints-like guitars. Plus, the album was mixed and mastered by Total Control’s Mikey Young, which should be enough to convince you to press play.

You’ll hear whatever stoner/slacker riff references you want to hear on San Francisco rockers Pardoner’s third album Came Down Different, which only speaks to its strengths. The band is well versed in the college rock of yore (that’s what we called “indie rock” before “indie rock” was a thing — Polvo, Pavement, Dinosaur Jr.) as well as their contemporaries cut from the same cloth (Parquet Courts). But a band that simply plays to their influences would not make it into this section – steal from your faves, build something new (and ideally, still sardonic) with the pieces. Their guitar squall knows no bounds. Produced in two days with the Grammy-nominated Jack Shirley (Deafheaven, Jeff Rosenstock), Came Down Different is easily Pardoner’s best release to date – catchy, self-effacing, messy, and loud.

Taqbir, Victory Belongs To Those Who Fight For A Right Cause EP

Tangier band Taqbir’s Victory Belongs To Those Who Fight For A Right Cause EP might be my first foray into Moroccan Arabic punk, and I have been missing out. You might’ve been to. But never fear – let’s learn together. I missed their EP, which originally released in February of this year, but thankfully the geniuses at La Vida Es Un Mus put it out again this month. It is a four-track stampede of “four short vomits of anti-religious sentiment made music… irreverent, careless outburst of anger towards an extremely patriarchal oppressive place,” according to their new label, and if that isn’t my shit, I don’t know what is. Reverb-heavy, pissed-off vocals; this is punk primitivism at its absolute finest.

So much has been said about the way in which climate affects extreme music-making. In the Pacific Northwest, eight months of unyielding drizzle often keeps the freaks indoors, emerging in summer with their idiosyncratic basement sounds. (In the U.K., its similar – gray skies inspiring bleak, class-conscious industrial.) Scandinavia is no exception – the best pop, metal, and punk comes from those Nordic countries with brutal cold, endless sunshine, and relentless darkness. You see where this is going. Finish band Häpeä’s (in English, “Shame,” and yes, they’re tighter than the playful London post-punk band) EP, Valistuksen Aika On Ohi (according to Google translate, “The Time of Enlightenment Is Over”) is a barn-burner: crushing percussion, guitar distortion loud and meant to be shoved down the throat, the sound of leaving your hand on stove a second too long.