Bon Jovi Under the Stars

Bon Jovi fans were treated to a unique experience on May 22 as drive-in theaters across North America showed a concert film the band made exclusively for this one-night-only event (via Encore Drive-in Nights). More than 400 venues participated, but Samantha Cottrell, Events Manager at Warwick Drive-In Theater (40 miles northwest of New York City), says that her venue is the best place to capture the vibe of what this type of airing is about. “We were the first theater to sell out, out of everybody in the United States,” she says. “I think it’s because [Warwick] has been here for 52 years – we’re known.”

Debbie Lightner, a self-confessed “superfan” from northern New Jersey, has another theory about why this particular location can lay claim as this event’s epicenter: “It’s the closest one to North Jersey, where [Jon Bon Jovi] has most of his fans.” This means, she says, that for Bon Jovi’s native state fanbase, “This is totally the home turf.”

Lightner and her friends are parked in the VIP section, where attendees arrived two hours before showtime for spots in the first row of cars. Up and down the VIP line, people excitedly talk of how this is their first “concert” as the COVID-19 pandemic wanes, and how they’ve missed their fellow Bon Jovi fans, who they first met at the band’s concerts decades ago. 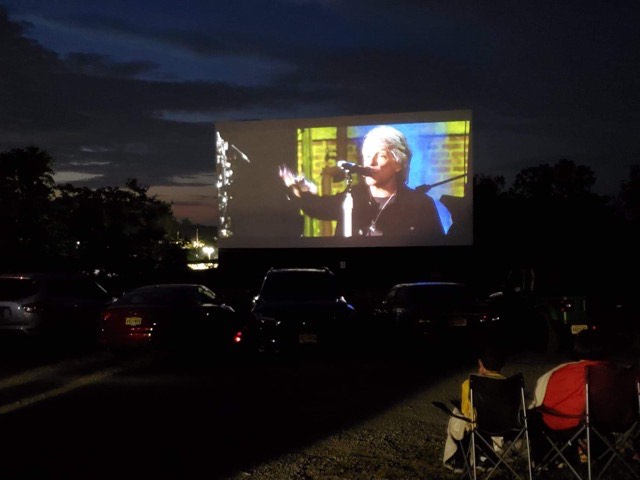 The happy atmosphere intensifies as the general admission parking area fills up an hour before the show begins. A party vibe pervades, but this is a family-friendly event, with kids scampering across the grass as adults relax on lawn chairs and picnic blankets in the summer-like heat and humidity. When the sun sets, 322 cars are gathered around the drive-in’s three screens, with more than 1,000 people primed for what comes next.

The crowd let out a hearty cheer when the screens flicker on and the opening act, singer-songwriter Dean Lewis, appears for a short set. The music echoes around the field, playing on hundreds of radios. When Jon Bon Jovi and his band come on, audience members dance beside their cars and sing along, especially during the big hits such as “Bad Medicine,” “I’ll Be There for You,” and “Livin’ on a Prayer.”

This concert was recorded in April at the Paramount Theatre in Asbury Park, New Jersey, but Jon Bon Jovi attempts to conjure up the same communal feeling that a live show would bring. “Honk your horn – flash your lights,” he commands the audience. And they do. It feels similar to watching a band on a Jumbotron screen from the back of an arena show. Lightner agrees. “This is just like being at a concert – same exact experience,” she says.

After the word “ENCORE” flashes on the screen, the band closes the show with an emotional version of “Wanted Dead or Alive.” People cheer and honk their horns in one last burst of enthusiasm before packing up and driving off. This event is finished, but Cottrell believes it isn’t really the end: “I don’t think it’s something that’s going to go away once the pandemic is over,” she says of these concerts under the stars. “It’s a beautiful night out.”

For the next show, which is Florida Georgia Line, head over to Encore Drive-In Nights’ website here.