Olivia Rodrigo Doubles Down on Teen Angst With Sour 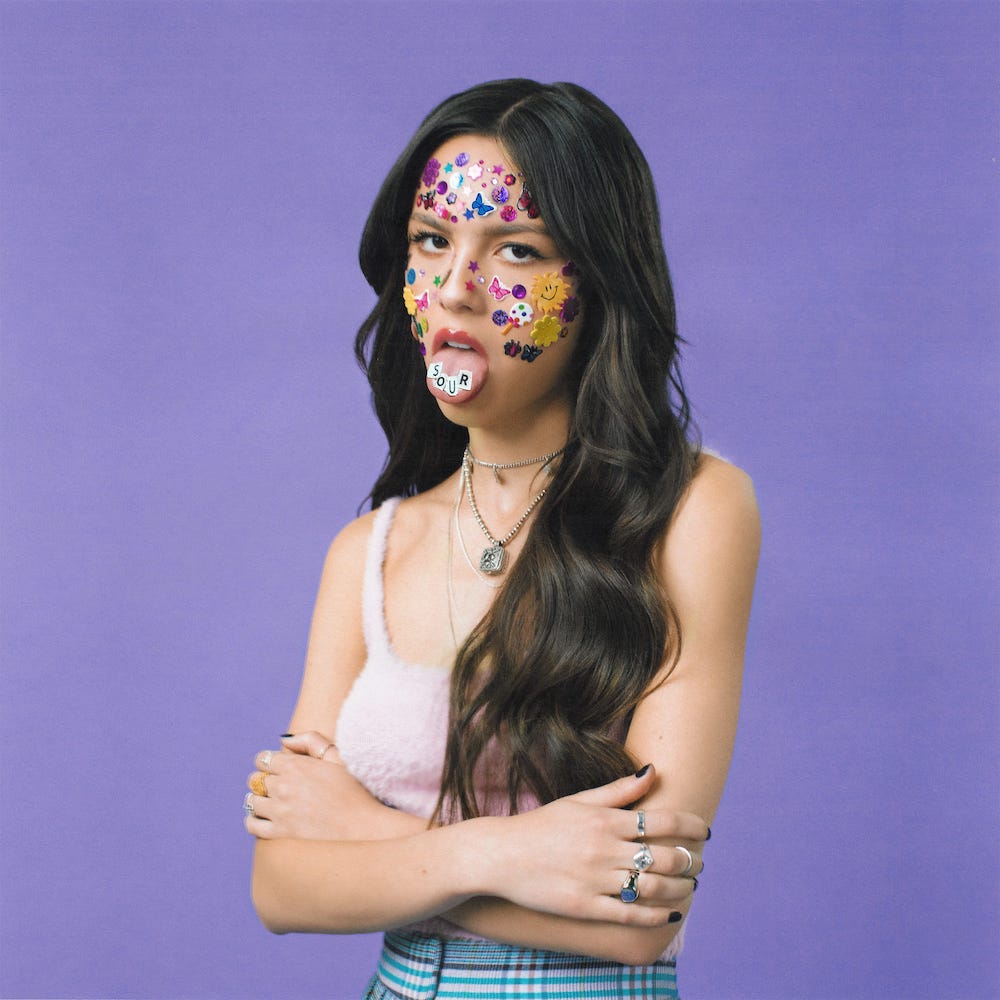 Being a teenager still fucking sucks and Olivia Rodrigo is here to tell us all about it.

That’s really the thesis of Sour, the pop ingenue’s impassioned, sassy and highly satisfying debut album. Sure, it’s largely a break-up record as Rodrigo explores the waves of sorrow, anger and confusion that follow a heart-stomping loss of young love. But more thrilling are the tracks that veer away from those emotional cataclysms. Rodrigo, 18, has quickly proven she’s an exceedingly self-aware songwriter, with a knack for unraveling the insecurities and expectations that cripple teen girls — even blooming superstars.

“I kinda wanna throw my phone across the room, ’cause all I see are girls too good to be true,” Rodrigo croons on “jealousy, jealousy,” a slow-burning clarion call to her fellow Gen-Zers, who can’t get enough of Instagram. If Rodrigo, a leading Disney actress and immediately beloved singer is cracking under the weight of social media, what hope do her adolescent fans have?

On “brutal,” a sneering sip of Riot Grrrl Lite, she spirals within fame’s maelstrom: “I’m so tired that I might quit my job, start a new life / And they’d all be so disappointed, ’cause who am I, if not exploited?” The track, whose petulance and buzzy guitar licks owe plenty to Liz Phair, is infectious and fun, though it’s all a little much coming from someone who’s been a household name only since January. Yeah, Olivia, it is brutal out there — get used to it!

The rest of the album plays as a perpetuation of “driver’s license,” her bleeding ballad of post-relationship angst (and 2021’s most inescapable single). Here, Rodrigo’s writing beams as deeply intimate and authentic, like an hour-long text conversation with a best friend, where every message is several paragraphs and those three little “typing” dots never stop flashing.

Rodrigo has been very open about her Taylor Swift fandom — she even interpolates the piano melody of Swift’s 2017 cut “New Year’s Day” on the lamenting “1 step forward, 3 steps back” — and that sort of meticulous and heavily emotive songwriting is everywhere on Sour. One could make the case for just about any song, but the influence is particularly apparent on “favorite crime,” a superb folk-pop showstopper that builds fluidly toward a sweeping, panoramic finish — very much bound to Swift’s folklore and evermore 2020 projects.

The attention paid to quotable and cresting bridges is another clear link. Rodrigo’s cynical “deja vu” and Swift’s 2019 banger “Cruel Summer” both go to the same sonic place, as Rodrigo’s collaborations with producer and songwriter Dan Nigro — the ex-As Tall As Lions frontman co-wrote most of the album — resemble Swift’s work alongside pop mastermind Jack Antonoff. Both Nigro and Antonoff came from the New York-area indie-rock world and have done well to squeeze every drop of tri-state emo from their respective stars.

Though that’s not to say Rodrigo is a carbon copy of Swift, or a mere successor to Lorde, Alessia Cara and/or Billie Eilish’s tales of juvenile malcontent. Sour is instead a high-definition lens zoomed on Rodrigo’s own experience, as the girl who poured everything she had into a romance — presumably with heavily speculated High School Musical: The Musical: The Series co-star Joshua Bassett — was shattered by its failure. Many of us know the feeling, that life cannot possibly go on.

“You betrayed me,” Rodrigo wails with power and familiar teenage histrionics on “Traitor,” a heartsleeve ballad where she cannot fathom how her ex-boyfriend could start dating someone else (Sabrina Carpenter, the gossip sites say) immediately after leaving her. Hell, they might’ve even been talking while she and he were still together. Scandalous!

Rodrigo’s feelings on the situation fluctuate from self-worth-ravaging agony (“enough for you”) to guarded acceptance (“happier”) to boiling frustration on “good 4 u,” a sinfully addictive pop-punk jam labeling the dude “a damn sociopath” and wishing she could move on like he clearly has.

In totality, the album is worthy of its fevered anticipation, following Rodrigo’s left-field commandeering of the mainstream earlier this year. She’s a versatile vocalist and deft songwriter who has now delivered a project that forcefully confirms she’s here to stay. A Best New Artist Grammy Award feels more imminent than ever.

“Maybe I’m too emotional,” Rodrigo wonders, in a moment of clarity during “good 4 u.”

No way, Olivia. Lean into it. It’s working.