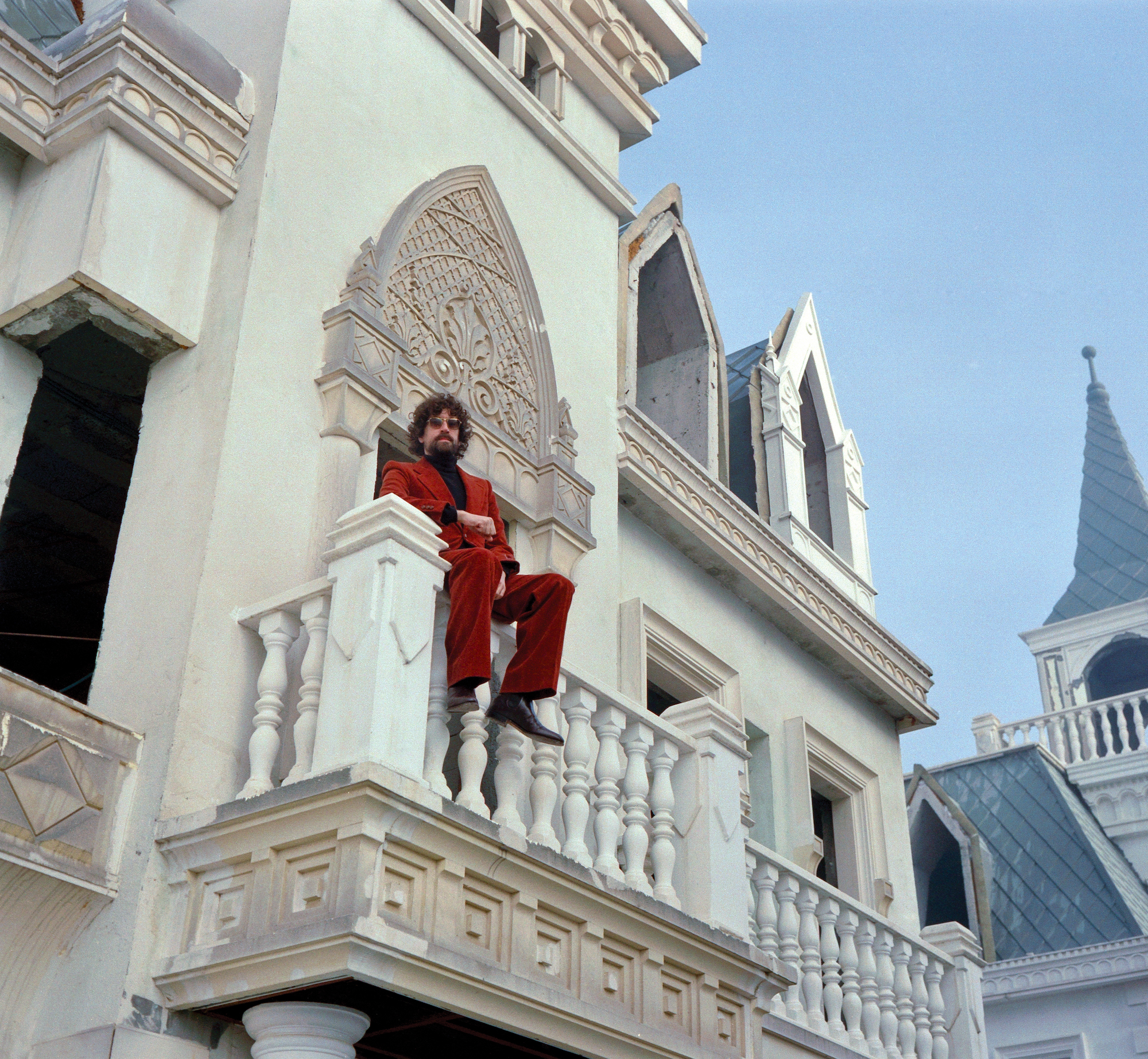 Who is Gaspard Augé?

Fans know him as the more mysterious member of French electronic duo Justice (which, for a group that only appears with a new album every five years and is better known for smoking cigarettes than actually speaking, is saying a lot). He’s the one with the big hair and the mustache, always peering through yellowed sunglasses but never with a smile. He’s mostly quiet in interviews and likes to wear a lot of vintage rock t-shirts, but what is going on in his mind?

That’s the scene of his one-minute visual released in celebration of his latest single “Hey!,” the second from his forthcoming debut solo LP Escapades. As the title suggests, the 12-track collection is an adventure; an instrumental escape valve from quarantine and cryptocurrency and whatever else ails you in 2021.

“It’s music that can, I hope, make you travel a bit in your own head,” he says. “This is what I like about having no lyrics. It makes it more open for everybody.”

For Augé, it was a reprieve from himself.

Justice is a two-time Grammy-award-winning duo, most recently taking the trophy for Best Dance/Electronic Album for 2018’s Woman Worldwide live album. They’ve headlined Coachella and Lollapalooza. For New Year’s Eve in their native Paris, as fireworks erupted over the Arc de Triumph in celebration of the newly-minted (and not yet tainted) 2020, it was Justice’s seminal anthem “D.A.N.C.E.” that blasted through official speakers.

He’s been with Justice for nearly 20 years and with his partner, Xavier de Rosnay, even longer. With Escapades, he’s starting from scratch.

“The creation was never paralyzed by the angst of being judged to the standard of a previous success,” he says. “It’s mostly when everything was finished that it became some kind of challenge to come up with a different character without the comfort of the duo—or the trio, if you count the cross as a band member. And if our duo works on complementary dynamics and a common vision, it was liberating to escape compromises.”

Justice’s debut album † was released in 2007, and ever since, that signature cross has been the flag under which all Justice fans unite. Escapades eschews the cross, planting a massive tuning fork into the Turkish steppes instead on an album cover symbolic of the musicality, maximalism and cinematic openness that awaits.

If you’re expecting it to sound like another Justice record—don’t. It’s familiar in its grandeur, and there are sounds and techniques you’ve heard before, but never quite this joyful, this dramatic, this brooding.

“It’s very sincere, in a way,” Augé says. “Something I really love in music, something that maybe has been lost since the ’70s and ’80s, is that people were making very genuine music in the sense that there was no cynicism in it. I really like—at least music-wise, I’m not talking about lyrics—something that is very straightforward in terms of emotion. When you make something cheerful, it’s very cheerful, and when you make something epic or melancholic, it’s [very much those things].”

Opening track “Welcome” plays like the start of a film, an anticipatory 30-second bit of electric orchestra where the “Gaspard” logo might appear if he were a film production company instead of a musician. From there, it’s a lightning ride into the lead single “Force Majeure.” It’s the most Justice-esque song on the album, and Augé acknowledges that it was easy and maybe even risky to introduce the project with something so familiar. When citing his influences, Gaspard speaks of stock tunes known as “library music” from the ’60s and ’70s, and emotive soundtracks to “cheesy” Italian films he has little interest in ever actually watching.

“The posters are always better than the movies from that era,” he says, “because it’s mostly airbrush or paintings that are so much more fascinating than the movie itself.”

That’s not to say pop has no place on Escapades. Indeed, it’s a very pop-structured album, built around “universal” melodies “that you can sing along to,” even if there are no actual words.

“Pop singing felt a bit like pollution, just something that was too restraining in terms of imagination,” he says. “With electronic music, most of the time they’re either very stupid or very serious. You have this kind of darkwave spoken word, and it’s always a bit cringy. I just feel there’s too much ego and posture in this kind of lyrical content, and I felt more comfortable just having chords and melodies.”

Tracks like “Belladone,” “Europa” and “Lacrimosa” are full of gritty noir, but when it’s time to soar, Escapades throws its head back and flies right into the sun. Imagination is key to this project, and we don’t want to color yours with too many descriptive words, but let’s just say “Captain” is the long-awaited Gaspard smile you feel with your heart. 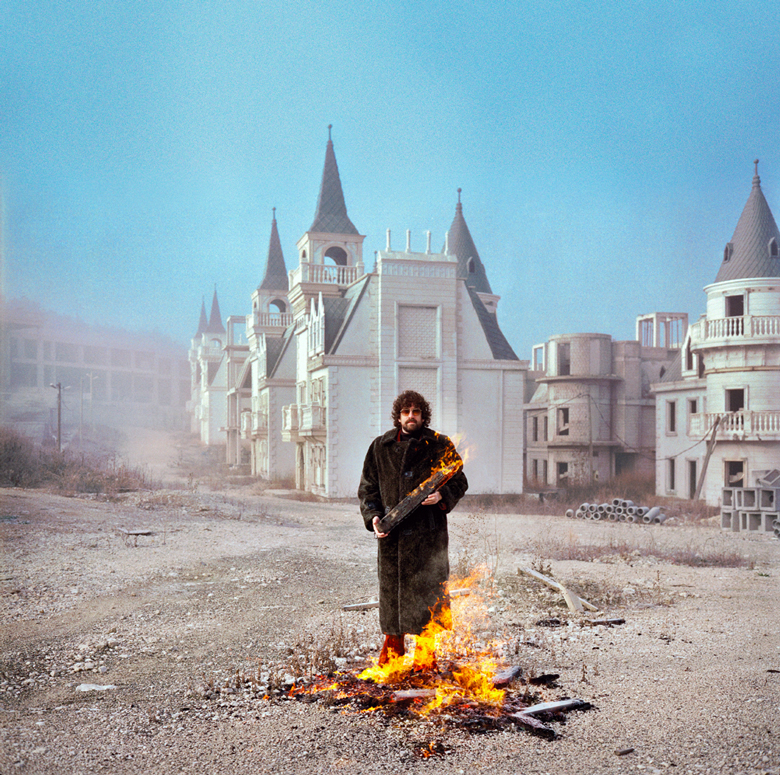 While some of the melodies have been with him for close to a decade, it took quarantine and the help of friends Victor le Masne and Michael Declerck to bring them to life. Where Justice spends long stretches of time perfecting every moment of a release, Escapades was born in quick, week-long spurts. Augé came in with his rough demos and worked with le Masne and Declerck to replace and re-record the sounds with real instruments or better synthesizers.

“We were always finding ways of improving the sounds, improving the structures, finding new parts together and just making it as exciting as possible,” he says. “It was a very relaxed recording, very joyful. We were just having fun.”

Most of the recording was done in Motor Bass, the studio of late French Touch legend Philippe Zdar, a friend and label mate to Augé.

“He collected the best equipment,” he says. “We were not running after a vintage sound, but it was like, ‘we have this great CS-80, let’s just try them … We also used very cheap ones that are not in the top 20 lists. We went to another studio that had a bit less equipment, but they had different stuff, and we would try everything. One was an old Korg synthesizer … from the keyboard player of Yes, so we might have used some Yes presets without knowing.”

Even more than the synth gear, Escapades is about the human element. From real choirs and flutes to live drums and audible breathing, Augé aims to amplify emotion with physical connection and a heavy dose of surreal imagination. Suffice to say, he’s come a long way from the days when he and de Rosnay “mastered” their electro tracks by CD burner.

“I guess the fun part was to get in the skin of a new character, and just think about all the visuals and all the videos; to have something a bit peculiar,” he says. “We got lucky to be in between two records and tours in these troubled times with Justice, so it was the perfect timing—and in my own timeline and mindset too, better to do stuff than regret not doing it.”

Escapades is out June 25 on Ed Banger Records. Check out the playlist of songs that influenced the album below, created exclusively for SPIN by Augé.