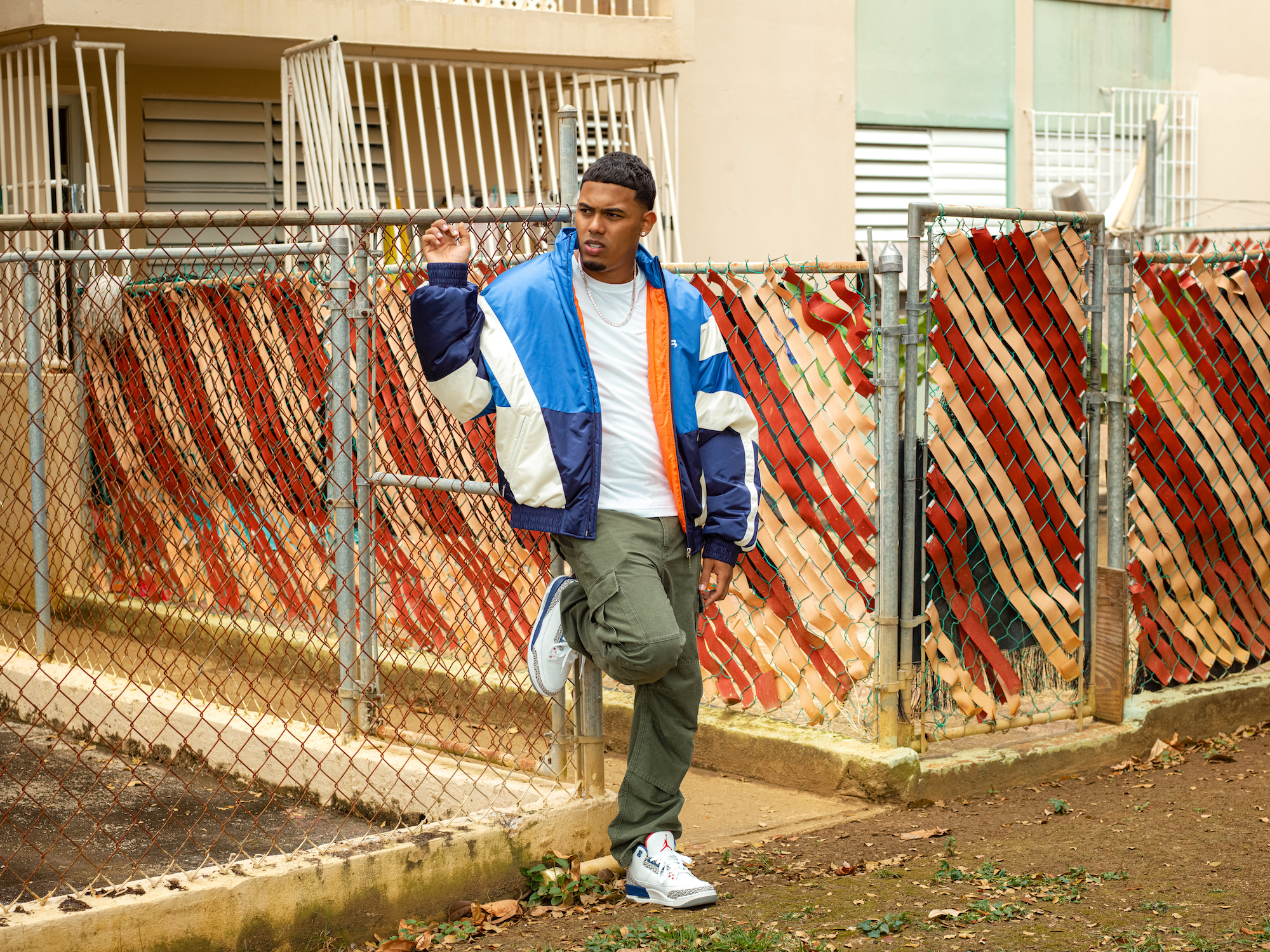 Nearly a decade ago, Myke Towers was an underground rapper from Río Piedras. To expand beyond Puerto Rico’s borders, Towers started to explore reggaeton and pop music — which led him to international success and to the top of Billboard’s Latin Albums chart. In the past two years, Towers has become a go-to hit-maker for heavy hitters ranging from Cardi B and Selena Gomez to Bad Bunny and Maluma, netting him multiple hits on Spotify’s Global 200 chart. He possesses a piercing rap flow that can leave an impression on any genre.

Inspired as a teen by the likes of Biggie and 2Pac, Towers (born Michael Torres) first generated buzz around his name from the rap en español he uploaded to SoundCloud. For last year’s sophomore effort, Easy Money Baby, the 27-year-old embraced reggaeton and saw him reach a wider audience due to the genre’s commercial resurgence.

After teaming up with established Boricua singer Farruko for his first global hit, 2019’s “Si Se Da,” and landing on the Hot Latin Songs chart in the U.S., Towers began to see a larger path forward for his music.

“That song opened a lot of doors for me,” Towers said. “I had to start with something that could call attention to me. I grew up with reggaeton ‘in the cradle’ as we say in Puerto Rico, but I want to show that there’s more to me.” On this month’s Lyke Mike, Towers returns to his hip-hop roots to prove the rising star still has the underground grit of his early years. Much like the classic 2002 Bow Wow film of a similar name, the album serves as a tribute to the Chicago Bulls icon — even featuring 23 tracks in reference to his iconic jersey number.

“[Michael Jordan] gave me that mentality of a winner,” Towers said. “I’m from the generation of LeBron James and Carmelo Anthony, but he’s the one who inspired them to inspire me.”

That winning state of mind runs through Lyke Mike’s triumphant trap anthems, including Towers’ first foray into drill music with “Balas Locas” (featuring Boricua rapper Jon Z). But even with the new sound, the self-proclaimed “Young King” isn’t letting his Latin hip-hop crown slip, as can be heard on the horn-heralded “No Salen.” It’s just that this time around, he’s making music “for the streets.”

“I spent a lot of time making music that was commercial and mainstream,” he added. “More people got to know me, but I felt like I was losing that heat from the underground. When people arrive at a certain level in their career, they don’t look back. I’m looking back [on Lyke Mike] because I want to.”

That reignited spirit of embracing his hip-hop past is best encompassed in the LP’s centerpiece, “Mírenme Ahora” (“Look at Me Now” for those who don’t speak Spanish). Backed by an old-school bolero melody and hard-hitting trap beats, the track sees Towers relive his rags-to-riches story.

“More than anything, [‘Mírenme Ahora’] is to let the ones who come after me know that if you work hard, stay focused, and follow your path, it’s going to happen for you.”

At the top of his game, Towers is using his platform to speak out against systemic racism. Following last summer’s Black Lives Matter protests, Towers released “Michael X,” and its accompanying video, the Afro-Latino rapper dressed as Malcolm X at the podium during his 1962 speech on police brutality. The powerful visual opens with audio of that speech as images of slavery, police beatings, and #BLM protests flash across the screen. “I’m a Black man,” Towers said, “I feel like I have a responsibility to talk about what’s happening in the world. If I stayed quiet, I felt like that’s like being part of the problem. What I was seeing happening to mi raza — I have to defend them.”

Even before Lyke Mike released, Towers was already starting the year off strong. After landing once again on Spotify’s Global 200 chart with the bubbly reggaeton bop “Bandido” with Puerto Rican singer Juhn, peaking at No. 82, Selena Gomez tapped him to feature on the steamy “Dámelo To’” for her Latin EP Revelación and Brazilian pop star Anitta enlisted him for “Me Gusta” with Cardi B.

“Selena Gomez is a queen in music,” Towers said. “For me, that was a big opportunity. Like when I collaborated with Anitta and Cardi B, I couldn’t believe it. Each time an opportunity comes my way, I have to take advantage of it. I just put my seatbelt on and enjoy the ride.”

Like the album’s namesake, Towers wants to leave behind an iconic legacy of his own. “I want my music to last forever,” Tower concluded. “I don’t want to make music that’s just making noise right now. I want to become a legend.”