This article originally appeared in the June 1985 issue of SPIN.

Hey you. Yeah, you—come here a second, I wanna talk to you. Look, I don’t know you, you don’t know me, we don’t go to the same parties, never tubbed together. I know you think I’m some kind of weirdo, but listen… I bet, just bet, you and I have one thing in common, one thing that unites us, one thing that will allow us to look each other in the eyes and feel right. Yes, friend…7-11. They’re in your town, they’re in my town, we have both seen the orange, white and green beacon against the night sky. What’s your thing? Coffee, video games, microwave food? You want somethin’? They got somethin’ you want, and that is good.

I ventured into my first 7-11 during the summer of 1968. That was back in the days when said establishment opened at 7:00am and closed at 11:00pm. I was still a believer by the summer of ‘80, and went nightly to have my dinner. For as long as I live, I will never forget those nights of fine dining. Hanging out at the 7-11 on Wisconsin and Q Street in Washington, D.C. … Oh man, some nights it was a Truck Stopper and a Big Gulp, other nights a large red-hot burrito and a Big Gulp. One night I ate two large red-hot burritos! Lord, Lord, pin a medal on me! Yes, I survived.

I joined Black Flag during the summer of 1981 and started touring 7-11s all through the United States and Canada. Things that spring to mind: Austin, Texas, near the Austin university hospital. If you get in the right spot, you can see three 7-11s at once; I can proudly say that I have been to all three. Edmonton, Canada: two 7-11s open, right across the street from each other. Needless to say, I checked out both of them.

Yes, I could go on and on, and I will. Here’s a little story for you. Rollins Journal, extract, 1/30/85, Hermosa Beach, California: “I wonder if the lady who works the graveyard shift at the 7-11 on Artesia and Prospect is a cop. The guys who work the day shift are, for sure. They probably get in real good with the students at Mira Costa High and then try and bust them for pot or something. You go in there and tell me what you think. Maybe 7-11s are headquarters for police surveillance! All across the U.S., we are being watched as we play video games, cook in the microwave, and buy video-rock magazines. Under that dopey, orange-and-beige regulation smock is a badge and a chest to pin it on, fella, and don’t say I didn’t warn you. Rollins out.” 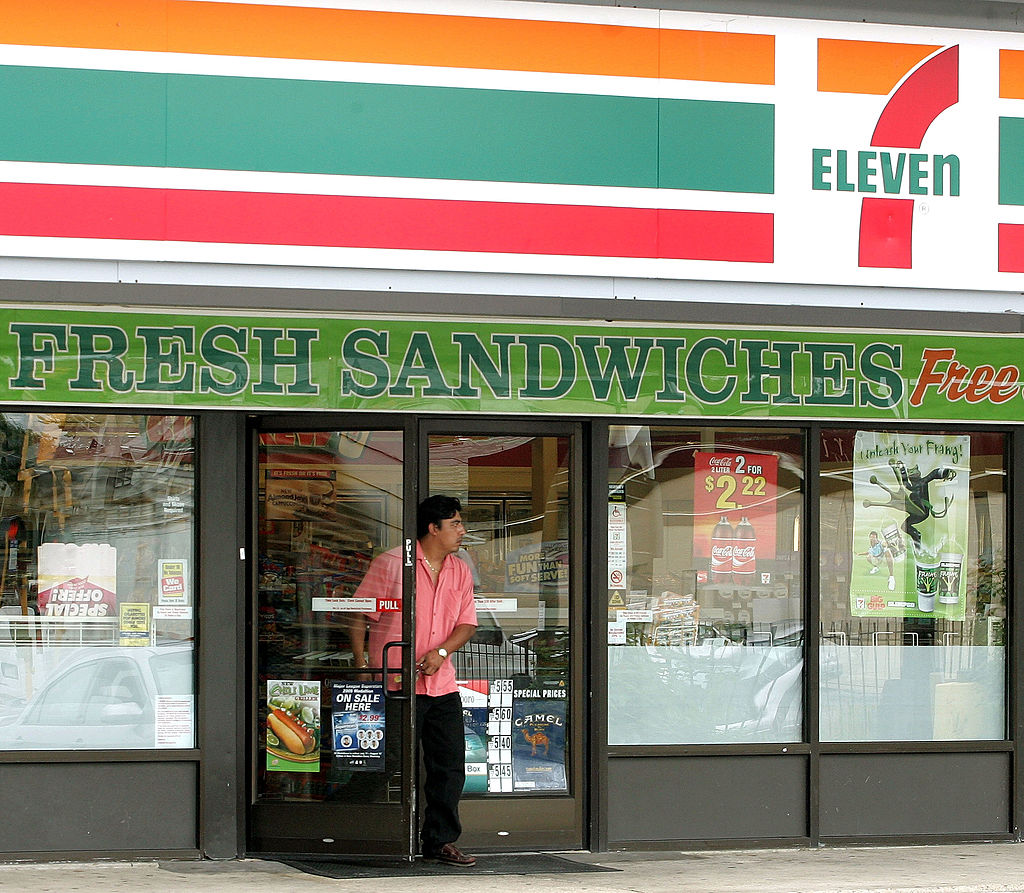 Sound familiar? Close enough, I’ll bet. Here’s another 7-11 story from Southern California, but it might as well be from Madison, Wisconsin… 2/13/85, Hermosa Beach, California: “Saw a kid rip off a Creem magazine from the 7-11 on Artesia and Phelton. Slick mover, that kid. He bent down, lifted his pant leg and bailed out of the store. Kids hanging out wearing Iron Maiden T-shirts and playing video games; someday, they will stand behind the counter. Now it’s just a dream. Isn’t it everybody’s dream? To don that orange and beige smock, to stand with your feet planted solidly, facing front proudly, turning only to fill an order for a Big Gulp or Slurpee? (Oh, 7-11, man, it’s 4:00am—who can we turn to now but you?) Have you ever looked into the cold-drink section and seen that familiar smock around in there? Bet you’d like to know what goes on back there. Always hoping that Channel 7 would do a behind-the-scenes report? Hey, me too! Seven-11 is the pulse-beat of America. I think that Bruce Springsteen should do a song about a 7-11 in Asbury Park, New Jersey, but write it in such a way that America’s youth can identify and slurp along with the Boss. Hail the Boss! Hail 7-11!”

I gotta ask ya—what happens to people? They turn new wave, they move away, they mate, they take drugs, they watch TV, they get in car crashes, they get lucky, they get stabbed, they get rich, they go crazy, they go to Philadelphia and never return, etcetera. OK, the girls and boys in Beverly Hills are no different from the ones in Harlem. They may smile a little more, but they have the same needs. Fine, there are no sushi bars in the ghetto and no pawnshops in the land of “charge it” youth, but there is 7-11. You notice that I didn’t say, “there are 7-11s.” I meant that. Seven-11 is more than a store, more than an institution, more than a way of life. It’s—it’s totally cosmic, dude. Like, bigger than “Thriller.”

At this point, you’re probably asking yourself, “What’s this slob getting at and what does he want from me?” What I’m getting at is this: In this age of trials and tribulation, of terror and turmoil of the soul, we need some common bond, a thing we can share, a place we can go to still the agitated waters of our hearts. Friends, it’s bigger than both of us. No, not Prince, not U.S. Steel: 7-11. How many people can you depend on seven days a week, 24 hours a day? Cyndi Lauper? Nastassia Kinski? Do they have a 16-ounce coffee with your name on it? They wouldn’t even give me the time of day, much less a crack at their Pac-Man machine. Friends, the answer is a simple one—it’s 7-11. The panacea, the common chord that resonates deep within all of us, is 7-11. That’s why 7-11s are springing up all over, rising to the cries of a nation that needs to feel good about itself again. Brothers and sisters, salvation is at hand. Seek and ye shall find.