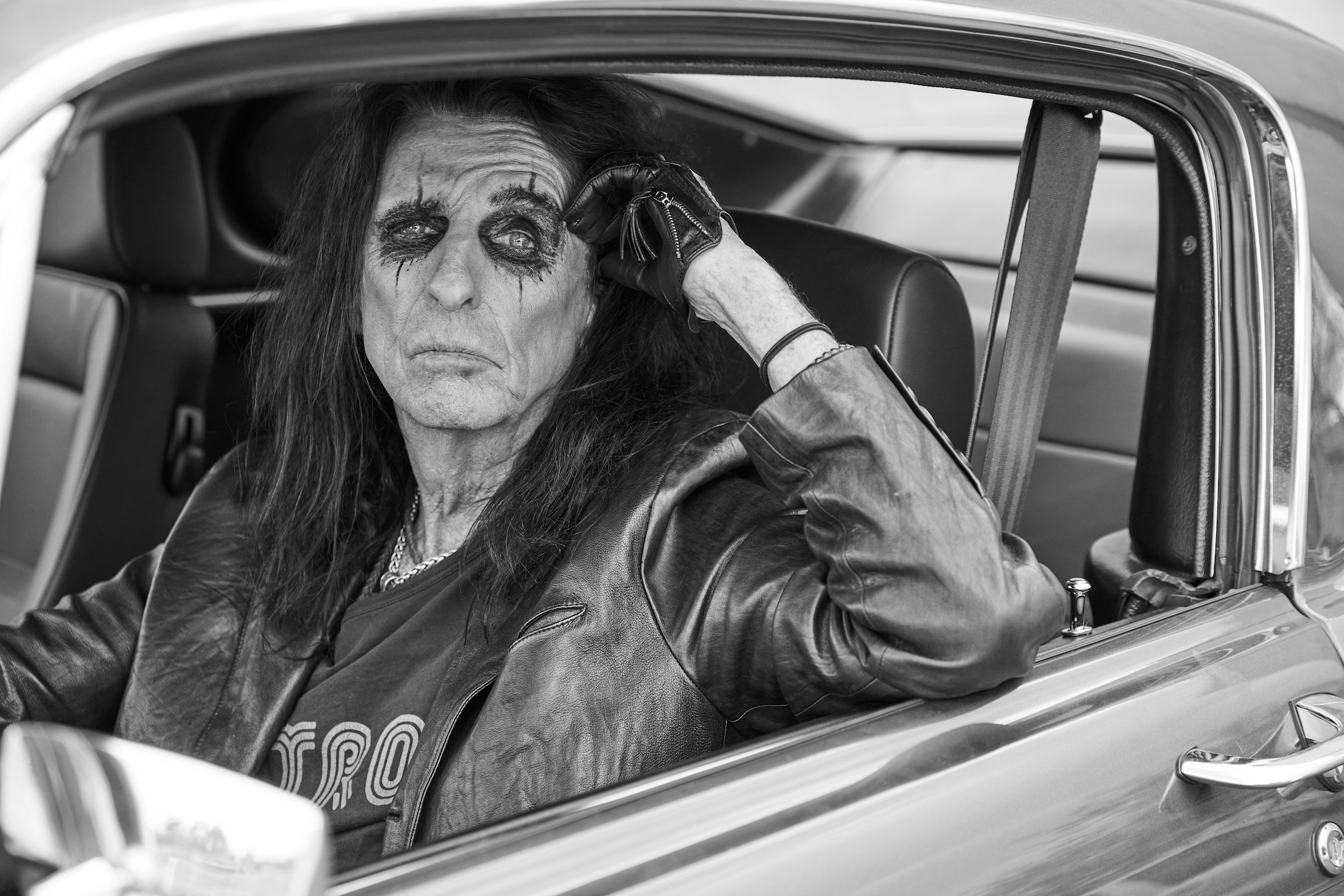 The big story on Alice Cooper, aside from the music (check the start to finish classic LP Love it to Death and the hit-heavy Best Of for starters) has always been theatrics. From his garage band days in the Spiders to his heyday in the ’70s and early ’80s, Alice Cooper was a bridge between rock ‘n’ roll and theater, and the band helped inspire and create heavy metal, punk and new wave. The idea of spectacle on stage isn’t a new one (Aristotle noted its importance in Poetics more than two millennia ago), but Alice always adds his trademark touch of shock and awe to immersive and fantastical effect.

Though his touring schedule is already booked through the next decade, like the rest of us he’s sitting out the pandemic and waiting for the giant pause button on the world to be lifted. Alice fills his days at home in Paradise Valley (an exclusive enclave that’s part of the sprawling Phoenix megalopolis) playing golf, taking early morning jogs, creating new music, buying vintage cars, happily ensconced in family life, and helping teens with his philanthropic charity Solid Rock. Never judge a book by its cover, nor a rock star by his stage performance. Behind the makeup and the spectacle, Alice is a Renaissance kind of dude with a heart of gold. Where does the inspiration from your songs come from? Do you prefer to write songs by yourself or with other musicians?
Alice Cooper: I almost always write the title first, and then I let the title write the song for me. I guess that means I work backward, I go with the punchline first. In the old days, we would write music to shock people. These days you can’t shock anyone anymore, you turn on the news and nothing we could ever write would top that. So I look around at what is going on for inspiration a lot of the time. I’ve been working with Bob Ezrin since the beginning and we usually bring in other writers. We also write a lot with the original guys. Any time we are writing a new album I’ll call up Dennis and Neal and Mike and ask them what they’ve got kicking around.

From the start, you’ve created some amazingly artistic and theatrical stage performances. Can you say something about how it all started?
I always believed that lyrics should be the script for the show. So in other words you don’t just say “Welcome To My Nightmare,” you have to give the audience the nightmare. When we were starting out Dennis and I were both art majors. We were both really into surrealist work. We started our band in the early days in response to the Beatles. We would do Beatles’ covers. But even in those early days, we were bringing props on stage. We had a giant spider web and there was a guillotine at our first gig believe it or not. I think it was just important to us to put on a show, to add visuals to the music. That really made sense to us.”

Where do you buy jewelry? And do you have a favorite clothing designer for daily wear and your performances?
I buy jewelry all over the place, but I buy a lot from Metal Urgency and Nightrider. But I pick up stuff all over the place. Clothing wise we usually start a new tour by with designs by Hazmat Design. Carin spends a few weeks drawing up concepts based on what I’m looking for and we end up with a baseline of wardrobe from there. Those are the big looks, and things like pants or shirts get interchanged. I work in stuff from John Varvatos and Diesel pretty often. I’ve had some pieces made by Lord SM in Paris. But I think fans would be surprised where a lot of my wardrobe comes from.”

How do you stay fit and maintain the stamina it takes to perform?
I play golf which is a very physical thing, that’s a big part of it. When we are on tour it’s really easy to stay in shape because we are never standing still. We play golf in the morning, we are walking around every city we’re in, going shopping or grabbing dinner. When we are home it can be a bit more challenging, but during this pandemic, I’ve really made it my goal to stay in shape for the road because we really don’t know when things will get back to normal and I want to be ready. I don’t necessarily have a strict workout routine, but basically, I start with golf, we do our usual day to day activities and in the evenings when it cools down here in Phoenix I go for a jog. I usually try to run two miles a day. Sometimes Sheryl and I will go for a walk instead. Speaking of Sheryl, she and I and really the whole family have been taking tap dancing lessons, believe it or not. That’s been really fun.”

Your new album is called Detroit Stories and you’ve said in an interview that Detroit was “the epicenter” for angry hard rock. As a successful artist and philanthropist, how do you sustain the “angry” part as a performer — or do you?
I think that rock ‘n’ roll is inherently angry, and if you want to see the true version of that you watch Pete Townsend. Pete is 75 years old and his knuckles are still bleeding when he hits his guitar and he’s still angry up there. Personally, I’m not really angry about anything but when I hear the music it brings that up. I created this character to really embody all of these negative things — the anger I guess — but that wasn’t really ever who I was myself. It was a character. Ever since I got sober, I make sure I leave Alice on stage. He doesn’t exist anywhere else, and I put all of my negative energy into him. So really it is easy to be a philanthropist and care about Solid Rock, our charity here in Phoenix. On the flip side, because Alice is a character, he has parameters, so to speak. Bob Ezrin is really the only other person who knows who Alice is. He knows what Alice would and wouldn’t say. When we’re writing lyrics for Alice one of us will say a line and the other will say, “No, no, Alice would never say that.” It’s like writing a script for Freddy Krueger — Alice is predictable and the anger he has is his own, so I don’t have to have that myself. I do think that anger has a lot to do with rock ‘n’ roll though. It needs to be angry. If you lose that you’ve watered it down.”

If you didn’t live in Phoenix where would you live?
I could probably find myself living in Maui. I have had a home in Phoenix pretty much my whole life so I never think of leaving, but if I HAD to leave I think it would be there. Though I’m not sure you’d be able to get me to leave Phoenix given the number of golf courses we have here.” Do you have a vintage car guru and what’s the next vintage car you’d like to buy? What else do you collect besides cars?
Coye Pointer is my car guy here in Phoenix. He has all of the connections when we are working on a restoration or when I’m looking for a particular car. I have a ’68 Bullet Mustang that’s essentially an old Mustang set on top of a new Mustang so it’s all brand new on the inside. I have a ’63 Studebaker Avanti, and I’ve had several of these over the years. I have an Alfa Romeo Spider. We also have a Dodge Hellcat. But I am always buying and selling cars so my garage is always evolving — in fact, right now I’m looking at a 1933 Ford Hot Rod. I’m also always looking for a 63 split-window Stingray. I am not sentimental about music memorabilia, but I do collect watches, mostly vintage Rolex bubble backs.

Do you write love songs for Sheryl?
All four major ballad hits that we had were written about Sheryl. She really is the love of my life.

When you’re touring, what’s your favorite city?
We love London. London is always our target audience, and it’s one of those city’s where we have spent a lot of time over the years and because of that it’s become very familiar. We have our favorite spots, you know? We stay in a lot of hotels, sometimes three in a single day depending on how we are traveling. I just stayed at the Shinola Hotel in Detroit. It is an incredible hotel. We love to stay at the Sunset Marquis in Los Angeles as well.

What do you do in Phoenix during the summer when the temperature is the hottest in the country?
We are almost always on tour in the summer so I’m rarely home, though this year we were due to the pandemic. In the summer everyone just adjusts to the heat. If you want to jog, you do it at night or before the sun comes up.

The Hollywood Vampires honors your “dead drunk friends” as you’ve put it, by covering some of their songs. Will you be adding songs by other musicians who have passed away?
Well, it depends on who it is who’s passing away. Originally, we wanted to tribute only those who were part of that particular group — guys who were in the room. But then we sort of expanded a little and we tip our hats to those who WOULD have been Vampires had they been around. In other words, I couldn’t see Tom Petty as a Hollywood Vampire. He wasn’t really in our crowd, whereas I could see Eddie Van Halen as one even though we never crossed paths because I was sober by the time they came around. But the Vampires have sort of moved past the tribute thing a bit and now we’re focusing more on creating our own music.

What is one thing you can tell us that we might not know about you?
Sheryl is not the shopper in our family, I am. I am addicted to shopping.

Outside of rock and roll, do you have any interest in other genres?
I like all kinds of music really. I listen to Antonio Carlos Jobim. I listen to a lot of Broadway which might be hard to believe. I almost always have my radio set to XM’s Beatles station, the Beach Boys or Sinatra.

Alice Cooper Calls for U.S. Police Departments to ‘Weed Out the Bad Guys’