The "heart in a blender" guy opens up about his social media reinvention, sobriety and alt-rock success 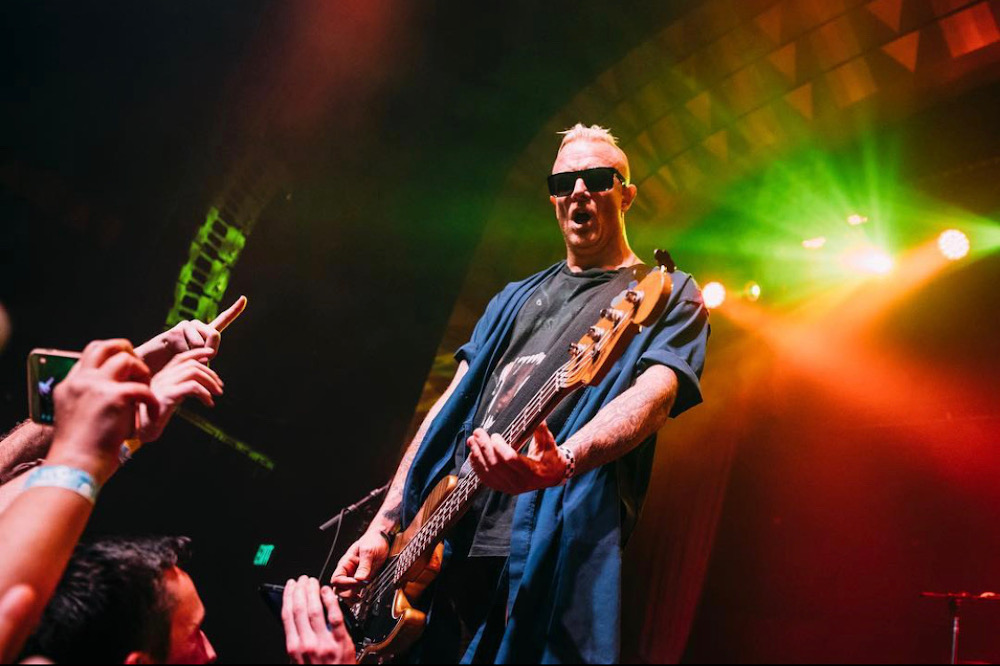 No one was more surprised than Max Collins when the Eve 6 singer-bassist became the King of Music Twitter.

In late December, Collins won over new fans and made headlines for his off-the-cuff, rapid-fire tweets comprised of random musings (“i had a famous song in the nineties and i cant afford health care”), amusing ‘90s alt-rock anecdotes (“i ever tell you guys about the time the guy from third eye blind told me he fucked my girlfriend?”) and wry observations (“most nineties bands just tweet like hey we’re comin to minneapolis april 23rd with like a photo of them with wallet chains”).

Collins’ resurgence started on Dec. 18, after tweeting that he was “literally a virgin” when he wrote the “heart in a blender” song — a playful reference to his band’s 1998 breakthrough hit, “Inside Out.” Over the next day and a half, Collins’ tweet gained momentum and has since been liked almost 32,000 times. In the last week-plus, Eve 6’s Twitter account has gained approximately 45,000 new followers.

It’s been almost nine years since Eve 6 released a record. That’s not to say that Collins, 42, has been resting on his ‘90s alt-rock laurels. He’s released a solo record, formed FITNESS (his synth-rock band with former AWOLNATION keyboardist Kenny Carkeet and Eve 6 drummer Ben Hilzinger) and performed live with his most famous band.

Still, at the end of a crazy year where nothing should be surprising at this point, the Eve 6 revival is, well, surprising.

Fans might be more surprised to learn that new Eve 6 music is on the way — the reason Collins recently began tweeting more from the band’s account. Within the next two months, Eve 6 (Collins, Hilzinger and guitarist Jon Siebels) are set to release Black Nova (Velocity Records), a self-produced EP mostly recorded in Siebels’ downtown Los Angeles apartment.

Last year, after an eight-year break from writing new material, Siebels and Collins started collaborating once a week on songs. They began recording toward the end of 2019 and finished in March.

“It was so easy, but when I say it was easy, I don’t mean that we were phoning it in,” Collins tells SPIN. “If you start belaboring the kind of rock we’re doing, things go south real quick. It’s about instincts. It’s about the moment. It’s visceral. It felt right. It felt exciting.”

And Collins never imagined the huge buzz his tweets have generated leading up to the release.

“It feels strange. It feels weird. It’s a thrill, for sure. Overall, it’s fantastic and utterly surreal,” he says. The last week and a half has been a whirlwind — and despite Twitter’s constant pull taking a toll on his nervous system, he’s happily seizing the moment. “I’ve been around long enough to know when things like this happen, you get grateful and you do what you can to support it and make it as good as you can.”

He continues to blow up Twitter, often posting upwards of 70 tweets in a single day. Beyond his commentary and anecdotes, he’s tagged a slew of famous folks (including Axl Rose, Elton John, and David Lynch) and political figures (like Bernie Sanders and Alexandria Ocasio-Cortez), asking if they like “the heart in a blender song.”

.@AOC do you like the heart in a blender song

“It’s not like I really need to know if they like the heart in a blender song,” he adds with a laugh. “I’m just leaning into the absurdity and the stuff that bands don’t lean into about their own band, their own genre. It’s really funny to me. It’s interesting to me. It has entertainment value to me.”

Collins also stresses that he isn’t trying to hurt anyone’s feelings when he posts about ‘90s alt-rock bands. “There’s a generosity of spirit to what I’m trying to do here, so if people take it as just base meanness, they’re really missing the point,” he says. “I have really honestly nothing but love for people. It’s not like I have antipathy for any of these people.”

In fact, some of the bands he’s posted about have not only taken Collins’ playful jabs in stride but also corroborated his stories. When Collins tweeted that Papa Roach frontman Jacoby Shaddix (who formerly used the stage name “Coby Dick”) once autographed 300 Eve 6 CDs intended to be gifted to radio folks, Shaddix promptly responded with a laughing face emoji and a photo of the signed copies. When Collins posted, “guy from smashmouth leaving the party early cuz hes got the meth shits,” singer Steve Harwell laughed and responded that it was probably “coke.”

Despite the optics, Collins is essentially clowning himself, as exemplified by a pair of recent tweets: “theres only two good ginger front men and im not one of them” and “im the guy from one of the least credible bands of the nineties but all my opinions are magically objectively unfalsifiable.”

That self-deprecation is fitting for Collins, who admits he has “mingled feelings” about his early success. He says he still gets a thrill out of hearing “the heart in a blender song” on the radio but ultimately looks back with a combination of “pride” and “embarrassment.”

“If you were best known for something you wrote when you were 17 years old, that’s like pretty wild. It’s just not common,” he says. “I was a kid when I wrote it. When I hear it, I hear a kid singing about a kid’s point of view, adolescent, whatever. At the same time, I’m super grateful. That song was a gift. I have been able to feed my kids and keep the lights on because of that song, and it allowed the band to be a working band.”

When Eve 6 (Collins, Siebels, drummer Tony Fagenson) released their self-titled debut, “Inside Out” landed at No. 1 on Billboard’s Modern Rock chart. Collins says it was “insane and surreal” to be “on top of the world,” hearing his song on the radio every 15 minutes.

He describes the single as “guileless,” which he says fuels its charm. “It’s not written by someone who is even capable of envisaging the attacks that writing a song that is that absurdly openhearted might get,” he says. “When that record came out, we got the most scathing press, and I didn’t know what I was doing, and I also think that’s why the song worked.”

Collins says that criticism was especially hard to endure because Eve 6 was still a developing band. Even now, he immediately recalls an unnerving SPIN review of Eve 6’s sophomore record, 2000’s Horrorscope.

“I’ll never forget it,” he says. “I read it on an airplane. We were on tour, and it was a really well-written bad review. I love a good bad review, but I wasn’t in a place in my life where I could appreciate one being written about me at the time.”

The reviews may have been mixed, but Eve 6 still earned several more charting singles (including “Leech,” “Promise” and “Here’s to the Night”) and soundtrack placements. But there were unforeseen pressures, and Collins had trouble coping. He was young and felt like he was being pulled in a million different directions at once.

“I didn’t know how to deal with it. You’re part of this thing that’s bigger than yourself, and it’s working, and it’s a business, and there are people who rely on you to do it,” he says. “There’s real pressure when you have a hit record to tour, tour, tour because there are a bunch of people commissioning that. We toured really hard, and we were kids. We were doing 18 months, coming home occasionally for two, maybe three days at a time and then going back out again.”

While the demands of success and lack of critical acclaim were tough, Collins says “the inevitable descent” was tougher —  from the pinnacle of success to “Spinal Tap-ian indignities,” staying in “shitty hotels” on tour and performing at near-empty gigs that weren’t promoted properly. He can look back now and laugh, but at the time it was demoralizing.

Collins grew increasingly miserable as he also struggled with an undiagnosed anxiety disorder and alcoholism. He reached his breaking point during the 2003 tour for Eve 6’s third record, It’s All In Your Head, when the singles weren’t charting well. “For a band like us that really was born of radio, that was a signifier. You sort of felt the momentum decreasing and the drinking continuing to increase. It was just miserable, and it was my call. I said, ‘I just don’t want to do this anymore,’” he says.

The band was also dropped from their record label, and Eve 6 went on hiatus in 2004. Without money worries, Collins spent his time smoking cigarettes and kept his nose buried in books. Despite an arrest in Pittsburgh and numerous episodes on tour when he was found unconscious due to alcohol binges, he also continued drinking heavily. But while driving home from his parents’ house on Mother’s Day in 2006, hungover and ashamed that he was unable to look his parents in the eyes, Collins decided to get sober.

Newly motivated, Collins rekindled Eve 6 the next year. Siebels was replaced with guitarist Matt Blair before rejoining the band in 2010. Hilzinger replaced drummer Tony Fagenson in 2018.

Collins says he’s enjoyed touring the last several years and that they keep it “super lean” on the road, bringing out minimal crew and friends. He’s come full circle, returning to the joyful headspace of forming Eve 6 with Siebels in high school. “It’s fun to play loud dumb rock and roll with your friends. That’s what it comes down to,” he says. 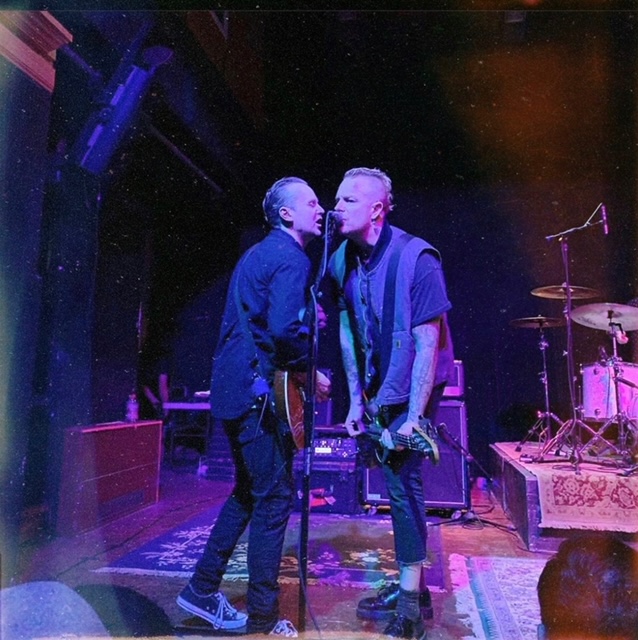 In addition to Generalized Anxiety Disorder, he has Obsessive-Compulsive Disorder, which was so intense eight years ago that, for a brief period, he wouldn’t leave his house. He’d been suffering from “hit and run OCD,” centered around a fear of inadvertently hurting people. Whenever he hit a bump in the road while driving, he’d stop his car in traffic and check underneath for a dead body, worried he may have hit somebody accidentally. He got therapy, began a mindfulness practice and started taking medication.

Still, the last year has been difficult for Collins beyond the pandemic and quarantine. Not only is he going through a divorce (last year, he separated from his wife and the mother of his two young daughters after 12 years of marriage), but he’s also grieving his mother, who died in October after a 10-year battle with ovarian cancer.

Despite the personal challenges, he hasn’t been tempted to break his almost 15 years of sobriety. “I really try to stay in gratitude,” he says. “I have a wonderful girlfriend [L1ZY, vocalist of electro-pop band Big Data], my kids and a handful of really close friends that I can tell anything to, so I am really lucky.”

Looking ahead optimistically into the new year, Collins is excited to release Black Nova, a five-song pop-punk romp clocking in at just under 13 minutes. The EP’s central themes are addiction and love — but the lyrics, naturally, abound with Collins’ droll sense of humor and trademark wordplay. On the last track, “Good For You,” he sings, “I just got out of a relationship / I should have dual citizenship / A passport for heaven and hell.”

Collins has a lot of new eyes on him — and his band’s Twitter account — right now, but he’s not feeling any pressure.

“We take the music seriously, but we don’t take it seriously in the way where we’re like, ‘Oh, we need to have a hit’ or ‘We need it to sound a certain way.’ We’re not troubling ourselves with any of that bullshit,” he says. “When we started doing this, it was, ‘We are doing this for ourselves and for the fans.’ It’s not like we’re trying to be Coldplay or something.”