The Distillers may very well be one of the most important punk bands from the first half of the 2000s. In four years, they released three albums (each more successful than the last), captured a unique sound that molded classic, straightforward punk rock with the attitude and emotion of the decade, and turned frontwoman Brody Dalle into one of the era’s most identifiable vocalists.

As part of a heavily male-dominated scene, Dalle and her bandmates showed millions of then-teenaged millennials that ladies too could pierce their lips, spike their hair, and rock just as hard as men without needing the mainstream commercial appeal of a No Doubt or Garbage.

Then the band pretty much immediately fell apart and before breaking up in 2006.

Dalle went on to form Spinnerette with guitarist Tony “Bradley” Bevilacqua for a few years before delving into a solo career, but in 2018 the Distillers announced that they’d reunited after over a decade apart. A few dozen shows and a 2018 single ahead of a hopefully soon-to-be-released new album later, it’s clear that the Distillers don’t plan on going away again anytime soon (even if a pandemic threw a wrench into their current plans).

Seeing as no one knows when they’ll be able to return to touring, the Distillers decided to give their fans a Christmas gift this year in the form of “The Distillers Very Special Christmas Special, Baby It’s COVID Outside” this Friday (Dec. 18) at 12 pm PT. The streaming event will feature a full performance (including some special cover songs), skits created by the band, and more.

SPIN spoke with Dalle ahead of the stream about the return of the Distillers and what it’s like to balance adulthood with playing in a punk band.

SPIN: What was it like to put together the Christmas special? It’s probably not something people were expecting from you.
Brody Dalle: It was actually really fun. We wrote skits — and as a band writing skits, there was just absolute hilarity. It was kind of a challenge, but it was really interesting to see what everyone brought to the table. It was just super satisfying, but definitely a challenge. This pandemic is an absolute fucking bummer for everybody, and we can’t do what we’ve been doing for the last 20 years — which is beating the street and traveling the world and playing shows and connecting with people everywhere. [A stream] is one of the only options to reach our fans and try to mimic what we’re used to.

Speaking of the last 20 years, how is having the Distillers together again now as adults different from when you did it the first time around?
We’ve matured — hopefully on most levels — and I think we just have a new appreciation for it. To come back around and have a second chance while also becoming closer as a band and as friends is just a fucking blessing. We were in the studio with Nick Launay [Yeah Yeah Yeahs, Arcade Fire], and we’d heard horror stories about how other bands function. It’s just kind of mind-blowing to us, so we feel really fortunate. I think we’re just all at a really good place in our lives. 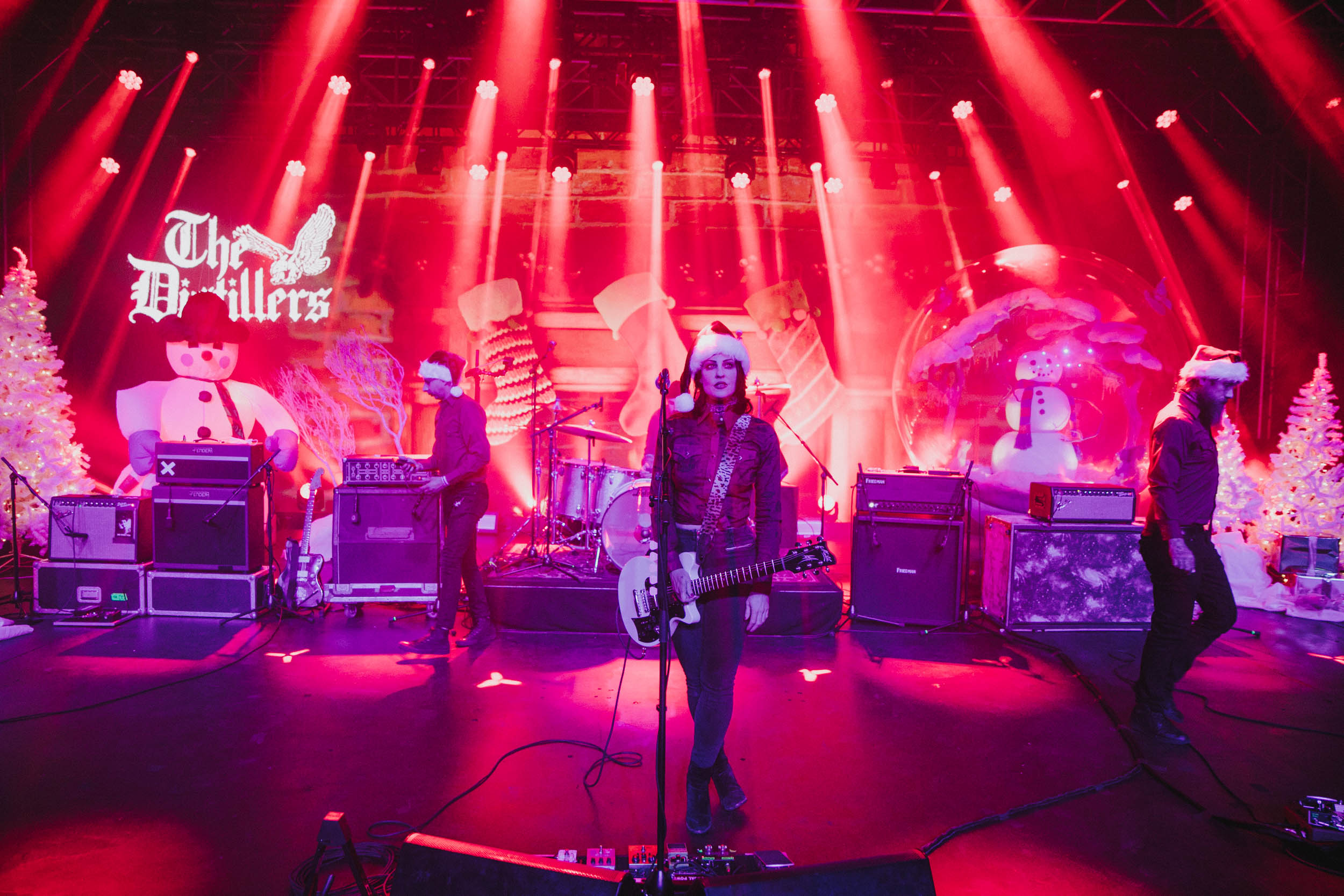 This year obviously didn’t go as anyone had planned, but what’s on your radar for 2021 seeing as there’s a new Distillers album coming at some point?
We’re booked up the wazoo to tour, but nobody really knows what’s going to happen. It’s kind of a crapshoot and the goalposts keep moving, so we’re just kind of flying by the seat of our pants. You know as much as I do now. I really have no idea what’s going to happen, but yes, we have a record coming out — hopefully sooner than later. And at this point, we’re pretty much ready to make another record too.

How have you gone about balancing responsibilities like motherhood — and everything else you’re doing — while still being able to focus on the band?
It’s about time management, and that’s something that I’m not really great at. But that’s why I have managers and people to support me. I’ve just really enjoyed spending this time with my kids, and then I’m off setting up things with work. I get to delve into the way my life is scheduled right now, so I have solid time with my kids, and then it’s all the time working. I’ve never had that before. It’s always been a juggling, high-wire balancing act, whereas now I’m on the ground juggling, and it’s all good stuff. Life is crazy — and as if life isn’t hard enough or crazy enough, they add a fucking pandemic to it. It’s apocalyptic. When I go back into [Los Angeles] or Hollywood, it’s just a different landscape. It’s really sad.

Seeing as this year marks the 20th anniversary of the Distillers’ self-titled debut album, what’s it like to look back on it?
It’s a reminder of how fast time goes, and how you really need to try to grasp and stay present because that’s really all we have. There’s a little reflecting of how far I’ve come and also grown, and how my life has changed. It’s kind of like watching a film in fast-forward. It’s wild to listen to that record, and it’s kind of hard for me to listen to it. It’s like listening to a musical diary — not necessarily the lyrics, but just musically. It’s like having my teenage demos put out into the world. But I love that record and a lot of memories that are attached to it. I’m proud of it, and like I said, it’s just a reminder of how fast things move. The older we get, it’s like we’re getting closer to the middle of the record and it just keeps getting faster.

After the first run of the Distillers, you dabbled in some other genres both with your solo album and with Spinnerette. Was it difficult to return to the straightforward punk rock of the Distillers after all of that?
I’ve always dabbled in all kinds of genres, so it’s not really new. But the thing that I appreciate the most is that I love punk rock music. It’s in my blood. Playing fast punk rock — aggressive music — it just hits a button for me that is so satisfying. It’s a relief, and it’s release, and it’s really calming. I just fucking revel in those moments.