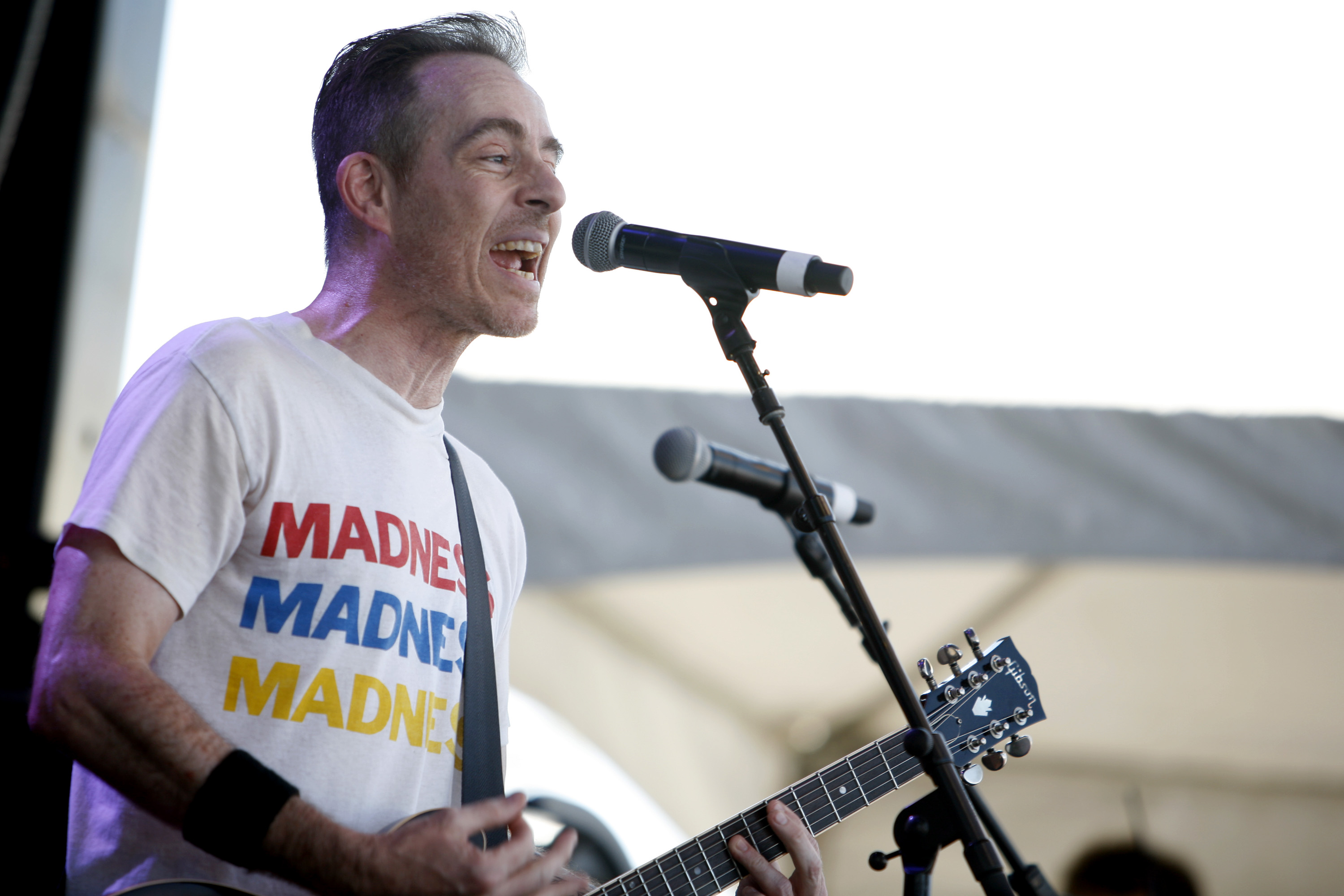 New Jersey native Ted Leo is one of the finest singer/songwriters of his generation, an unabashed anglophile who’s spiked his literate and melodious indie rock anthems with hardcore punk, dub reggae, Celtic folk, and Thin Lizzy guitar leads. He’s best known for his work since 2000 as the leader of Ted Leo and the Pharmacists, but over the last 30 years, the prolific multi-instrumentalist has played in a number of bands including Chisel, The Both, Citizens Arrest, and The Spinanes, and has even contributed songs to Cartoon Network’s Steven Universe The Movie and Hulu’s Difficult People.

Leo was born on Sept. 11, 1970 – perhaps a slightly symbolic date given that he’s written more than a few songs about the failures of post-9/11 American foreign policy. As he turns 50 this week, we’re looking back at the 50 best songs from across his long career, his biggest college radio hits as well as his most neglected obscurities, from 1989 to the present day, available in playlist form:

“Bottled in Cork” bursts out of the gate at a breakneck pace like a classic Ted Leo political punk song as he belts out wordy lines like “There was a resolution pending on the United Nations floor.” And then, just 23 seconds in, the song stops on a dime and completely changes direction for a jangly midtempo singalong. The track’s entertainingly silly music video was directed by WFMU’s Tom Scharpling and co-starred comedians Julie Klausner and Paul F. Tompkins. Leo later collaborated with Klausner on the song “Bitter on Christmas” for her series Difficult People in 2015, and Tompkins sang backup on Leo’s 2017 song “Let’s Stay On The Moon.”

A teenaged Leo’s earliest known recordings were with the New York hardcore band Citizens Arrest, singing lead on the band’s nine-song demo tape. By the time Citizens Arrest made proper studio recordings in 1990, Leo was no longer in the band, although they recorded one song from the demo that he co-wrote, “Woodstock,” with Daryl Kahan on vocals. In the early 2010s, Citizens Arrest reunited with Leo back on guitar to play a few shows and release a seven-inch of new songs.

One of the more surprising entries in Leo’s discography is a writing credit on a song by Fall Out Boy labelmates Cobra Starship. But Leo and a fellow Jersey punk rocker, former Midtown frontman Gabe Saporta, co-wrote “Keep It Simple” for Cobra Starship’s 2006 debut While The City Sleeps, We Rule the Streets. And the result pretty much sounds like a glossier version of a song that could have been on Hearts of Oak.

Animal Crackers was one of a handful of short-lived bands Leo played with in between Citizens Arrest and Chisel (including Puzzlehead and Hell No). Animal Crackers released a split EP with the Seattle band Whipped that included two Leo originals that hinted at his tuneful songwriting prowess to come, and a hardcore cover of Rick Springfield’s “Jessie’s Girl.”

Back in the ‘80s, when Leo was playing in hardcore bands and Aimee Mann was in MTV rotation with ‘Til Tuesday, it would’ve been hard to imagine their paths crossing someday. But both eventually charted similar courses as indie singer-songwriters, playing shows together as solo artists in 2012 and then collaborating as the Both for a self-titled album in 2014. One highlight of the album, “Bedtime Stories,” was a tribute to the late Game Theory frontman Scott Miller, who helped bring the future collaborators together a decade earlier when he gave one of Leo’s albums to Mann.

Before the turn of the century, Leo and the Pharmacists released tej leo(?), Rx / pharmacists, which is one of the strangest, most omnivorous, and most divisive album in Leo’s catalog, an experimental precursor to the formation of the full-band incarnation of the Pharmacists. The lo-fi album recorded with Jodi Buonanno of the Secret Stars, who Leo would marry in 2004, features straightforward singer-songwriter material alongside offbeat attempts at dub reggae and hip hop-style looping and sampling. But the album’s divergent styles come together most successfully on “Walking Through,” a catchy guitar-driven song built over the Billy Squier drum break from UTFO’s ‘80s rap hit “Roxanne, Roxanne,” with the Fugees and other samples chopped up throughout.

Ted Leo spent a stretch of the late ‘90s gigging around the East coast with a new group, the Sin Eaters, with his brother Danny Leo and Sean Greene. But they disbanded without releasing any music, and Leo eventually funneled some of the Sin Eaters material into the Pharmacists, including some of the more angry and dynamic material on 2000’s Treble In Trouble EP. “Abner Louima v. Gov. Pete Wilson,” named after the victim in a 1997 police brutality case, is driven by tumbling and furious drum fills by early Pharmacists member Amy Farina (The Warmers, Coriky).

The first time I stumbled upon Ted Leo’s music was when I was sent a promo copy of a sprawling double-disc compilation, Transmission One: Tea at the Palaz of Hoon, which featured songs by Bright Eyes, Mo Tucker, and Elf Power. I didn’t think much of Leo’s addition, “You Always Hate the One You Love,” at first, but I kept coming back to the high energy solo track about relationship dysfunction that was funny, passionate, and poignant. It’s a shame he never re-recorded it with a full band arrangement.

Ted Leo - You Always Hate The One You Love from BJ Rubin on Vimeo.

Leo strums six big dramatic power chords at the top of “Ballad of the Sin Eater,” but it’s the only guitar in the song. In concert, Leo typically sets down his guitar after that intro to sing the rest of the song over David Lerner’s propulsive fuzz bass riff and shake a tambourine. And I’ll always remember an especially dramatic performance at the Black Cat in D.C. when Leo banged the tambourine against his head at the climax of the song. “Ballad” was featured alongside songs by the Strokes and Interpol on 2003’s Yes New York, a new school answer to the seminal 1978 compilation No New York.

Ted Leo self-released his first full-scale solo album simply under his own name, The Hanged Man, in 2017. It’s a harrowing, cathartic record that grapples with a few years of personal and professional setbacks, including Leo’s wife’s miscarriage, that he’d been through in the seven years since his last album. “Lonsdale Avenue” is a heartbreaking song about that loss, a simple voice-and-guitar track that feels like the quiet centerpiece of a long album full of more elaborately produced songs.

Ted Leo formed Chisel with his University of Notre Dame classmates in 1990. The mod punk trio toured and recorded heavily for the next seven years, releasing three albums after relocating to Washington, D.C. in 1994. About a half-decade before Ted Leo had a band called Pharmacists, he seemed to be toying with the name throughout Chisel’s second album 8 A.M. All Day, on “Theme For a Pharmacist” and “Ja M’appele Zero,” which opens with the lyric “spent my last dime at the Pharmacists show.”

Election years have prompted some of Ted Leo’s most overtly political songs – 2004’s Shake The Sheets raged against George W. Bush’s bid for reelection, while 2017’s The Hanged Man reacted to the sudden reality of a Trump presidency. And the arrests of protesters and journalists at the 2008 Republican National Convention prompted a fiery response from Leo less than two weeks later on the aptly titled Rapid Response EP, which featured originals as well as covers of the British punk bands Cock Sparrer and Amebix. The most potent song on the EP, the taut and blistering “Mourning in America,” was re-recorded for Leo’s next proper album, 2010’s The Brutalist Bricks. And it features one of the most impressive performances from Chris Wilson, Leo’s stalwart drummer on nearly every release and tour since 2002.

Living With the Living has Ted Leo’s highest concentration of epic songs running six minutes or more. But “La Costa Brava,” in which his narrator imagines taking a much-needed break off the coast of Spain, has such a soothing uptempo glide that you almost don’t notice how long the track goes on. In 2013, Leo released “La Costa Brava (Versio Catala),” a stripped-down recording sung entirely in Catalan.

“Me And Mia” is by some distance the most popular song Ted Leo’s ever written, and with good reason: it’s the Pharmacists in their sleek power trio formation with the most polished production of his career, a pulsing power-pop anthem with a fluid switch to a reggae groove on the bridge, and a huge, uplifting chorus. But I still want someone to explain the song’s odd music video featuring two Ted Leos, a rhythm section, and a pizza place.

“Timorous Me” is the longest-running staple of Pharmacists concerts, still the second most frequently played song behind “Me and Mia.” And there’s really no song that lights up an encore better at a Leo show, building patiently from a bluesy guitar groove to a stomping climax and a guitar solo with a melody that evokes an Irish wake.

It may sound strange to describe any Ted Leo song as his answer to AC/DC’s “Thunderstruck.” But “Little Dawn” opens and closes with an intricate guitar line full of 16th notes, underpinned by a pounding kick drum, in a way that recalls the hard rock classic, except at a much faster, more Ted Leo-friendly tempo. The band performed it, naturally even faster than the album version, on Late Night With Conan O’Brien in 2005.

“Where Have All The Rude Boys Gone?” is like a catalog of Ted Leo’s musical obsessions in miniature: the lyrics are a salute to the Specials and the 2 Tone ska revival, complete with namechecks of song titles and band members, but the music is a swinging hard rock groove reminiscent of Thin Lizzy.

After laying the groundwork for a decade with Chisel and other bands, and tentatively working towards a new sound in the Sin Eaters and tej leo eras, Ted Leo signed with punk institution Lookout! Records went into the studio with Fugazi’s Brendan Canty in the producer’s chair and laid down the strongest set of songs of his life. 2001’s The Tyranny of Distance was the spark that ignited all that was to come in Leo’s career, and the majestic waltz of the opening song “Biomusicology” set the tone perfectly: “All in all, we cannot stop singing/ We cannot start sinking/ We swim until it ends.”

Listen to Ted Leo’s songs below.