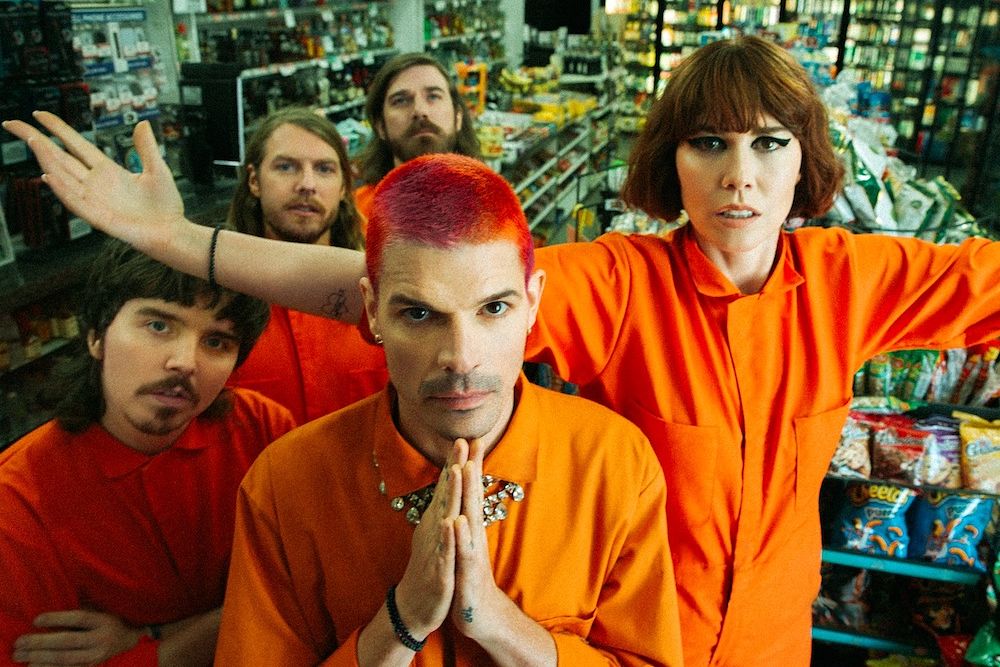 With everyone sequestered and self-quarantining due to the coronavirus, we’ve asked our favorite artists to come up with playlists that keep you entertained. Here is Hannah Hooper of Grouplove:

We worked tirelessly on our new album, Healer. Our heart, soul, blood, sweat and tears went into every piece of this album. The music, the artwork, stage design, outfits- everything was handmade and created for the live show. We even hired two new musicians to tour with us to help play this album live the way we feel it deserves to be played. Once the pandemic hit and tour was canceled, we were devastated and helped relieve some of our anxiety and depression by playing Sorry, drinking and making playlists of songs we love. This one is for all of us who need to get our anxiety and frustration out. Not all of us can sit still and meditate and that’s OK.

“Doorman” – slowthai and Mura Masa
Ben, Dan, Wessy, Christian and I had just left Winsome, RIP to our favorite east side breakfast spot, and this song came on. It became our anthem on our drive to the Healer sessions with Malay in North Hollywood.

“Television” – Idles
When my brain surgery was fast approaching I’d throw this song on, sometimes for hours on repeat, to feel better. It carries that same weight in quarantine – “I go outside and I feel free cause I smash mirrors and fuck TV.”

“This Side” – Earthgang
This song is Christian, Willa and my quarantine anthem. “Let’s go to the lake, let’s jump in it naked, we can escape, we can leave this place.”

“Give Me the Cure” – Fugazi
“I never thought too hard on dying before, I never sucked on the dying, gimme the shot, gimme the pill, gimme the cure.” Fugazi’s lyrics seem even more relevant today. They’ll never go out of style. Reunion tour when it’s safe?

“Self Care” – Mac Miller
“Somebody save me from myself yeah.” Who doesn’t feel hopeless at times during this pandemic. I put this track on to cut myself some slack.

“Isla De Encanta” – The Pixies
Makes you feel alive and they’re saying “Me voy! Donde no hay sufrimiento” which means “I’m going where there is no suffering.” – Who the hell doesn’t wanna go there?

“Boom Biddy Bye Bye” – Cypress Hill
We got a volcano right when we heard quarantine was gonna be a long while. This is the first song we listened to after the first session hahaha, it felt like “boom biddy bye bye” was the coolest way to say ‘so long world for now.’

“Burn Hollywood” – The Neverly Boys
Dave Sitek, who produced the majority of Healer, played the demo of this song for us in Tornillo, Texas. Right when I heard “burn Hollywood burn cause you don’t give a fuck about me and that’s alright cause I don’t give a fuck about you” I knew Dave and I would be homies forever. He’s like a wizard poet and a rebellious teen trapped inside a weed jar – what isn’t there to love.