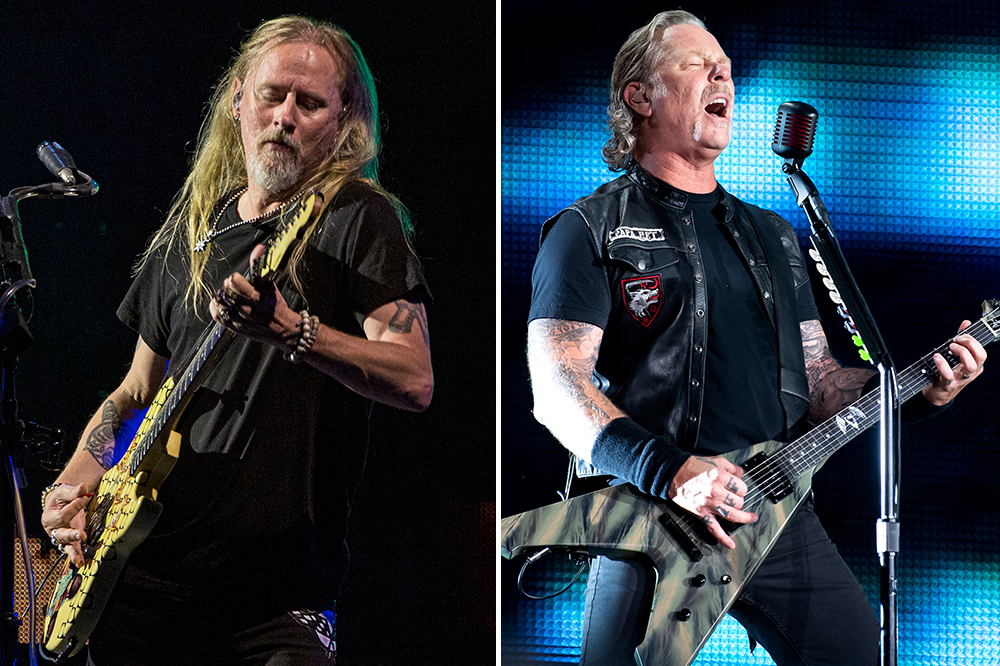 Today James Hetfield turns 57 and Jerry Cantrell of Alice in Chains paid tribute to the Metallica frontman, heaping praise on someone he calls “the Godfather.”

“What makes James such a great frontman is his physical presence,” he told Metal Hammer magazine. “Nobody else commands the same kind of respect and attention without it being self-seeking or egocentric. He’s all about the music; all about the fun and the celebration and the connection with the fans. And that, to me, is really inspiring. Especially because he’s done this for so long, and he’s been at the top of his game for so long and he continues to search for a deeper meaning. He took an underground thing and took it worldwide.”

Cantrell pointed out that Metallica was “a huge thing” for him and other hard rock or metal bands out there. And when asked about whether or not Hetfield has hit “rock icon” status.

The Alice in Chains singer and guitarist said, “He already has — he’s the Godfather, man.”

Hetfield has performed a couple of times with Alice in Chains more than a decade ago. He played “Would?” during the Rock Am Ring festival in Nürburgring, Germany as well as the Warfield in San Francisco.

Hetfield in an interview that while he “wasn’t really close” with late Alice in Chains singer Layne Staley but shared a “kinship” with Cantrell.

“I hung with them a little bit, always just loved their music,” he told Revolver, “and I’d say that Jerry and I share some life experiences, like getting a second chance at life and realizing how cool things can be. So we’ve got kind of a kinship that way. And seeing them play — I just love hearing those songs. Those songs are awesome and should be heard, you know? They were so unique, so ahead of their time.”

Watch Cantrell and Hetfield onstage together below.