This article originally appeared in the March 1997 issue of SPIN.

What did you think the first time you read the script?

I was like is this a parody? I remember one of my lines was: “But we can’t turn our back on fear. Fear is our only defense.” I mean, who talks like that? Overall, I saw it as much closer to The Wizard of Oz than Star Trek. You’ve got a pirate, a wizard, a farm boy, a princess, and an evil overlord. We could’ve been traveling in a horse-drawn carriage.

Did you know all along that Darth Vader was Luke’s father? 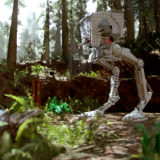 No, and I was always asking. George told me that Luke’s father fell into a volcano. I wondered about Luke’s mother, too. I always thought that she should’ve been disguised as Boba Fett, that I could pull off Boba Fest’s mask and it’d be my mother who’d been secretly sent to watch over me. Eventually, I was one of a handful of people who learned Vader was my father during shooting for Empire. At the time, extras were getting paid by the British tabloids to leak what they knew.

You never got to kiss Carrie Fisher. Do you feel gypped?

Well, George really wanted it to be suitable for kids. The very first day Carrie was on set they shot her running down the Death Star’s hallways. Apparently she wasn’t wearing a bra, and I guess when she was running, some of the crew…noticed. After that take, she disappeared for a while. When she came back she had this funny look on her face. She told me, ‘I can’t believed this—they taped me down.’

What would you have changed about Luke?

I always wanted Luke’s hair to change. When he became a Jedi he should’ve lost the floppy look and gotten a buzz cut.

Have you ever run into any Star Wars freaks?

Well, when Empire first came out in Germany, I went to the opening and there was this mob of people outside. I got pushed up against a wall and somebody grabbed me in between my legs. Really. I felt like a piece of meat.

Do you own any of your own action figures?

Of course. But I let my kids play with them all, so now I have a bunch of headless Star Wars dolls like everybody else. Unfortunately, I never got what has to be the strangest piece of Star Wars memorabilia: Underoos with my face on them.

Which is your favorite of the three movies?

Empire was especially cerebral and spiritual and dark. But it’s like asking which is your favorite kid. I like them all for different reasons.