Chris Jericho was sitting at home in quarantine on April 11th like everyone else. He couldn’t wrestle (he’s one of AEW’s biggest attractions), and his band Fozzy wasn’t touring either. Then his pal Kent Slucher — Luke Bryan’s drummer — sent him a text with a drum part, and from there, things came together really quickly.

“I said it sounds like KISS’ ‘No No No,'” Jericho told SPIN over the phone. “I asked him what he was doing and he said, ‘I’m just laying down some fun tracks with a friend of mine and we’re going to do a cover of the song.’ I asked him if they needed a singer and he said, ‘Absolutely.’

And that’s how it started. Calling themselves Kuarantine (get it?), Jericho and Slucher enlisted guitarist Joe McGinness and PJ Farley from hard rock band Trixter to fill out the lineup. Unlike other KISS tribute bands, Kuarantine focuses solely on ’80s KISS, which Jericho says is his favorite KISS era (“Everyone likes to bag on me because of it”).

As it turns out, McGinness was already performing in a KISS-inspired band called KLASSIK ’78 that play in the style of ’70s KISS, but record originals. 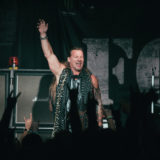 Who Wants to Be Sports Entertained?

Due to the power of technology — in this case, Zoom — the band, which has been around for just five weeks, were able to record and create a video in quarantine. In fact, some of the band members have yet to meet in real life.

“They just wanted to do it probably for themselves, put it on social media and I was like ‘Fuck no dude, we can make something out of this,'” the singer explains. “Let’s see how far we can go with this.”

In a few weeks, Kuarantine had their first song, covering “No No No” from 1987’s Crazy Nights, which you can view below (and listen to here).

“This is how you can form a band in the COVID era,” he jokes. “You have four badasses singing and playing this era of rock n roll from one of the biggest bands in the world that no one ever focuses on this part of their career. It’s cool and organic.”

But, now that the first song is in the rear view mirror, Kuarantine already have their second cover lined up — with a special guest.

They enlisted Bruce Kulick, the KISS guitarist before the ’90s reunion, to perform on their next song. Jericho says that he sent “No No No” to Gene Simmons, who in turn passed it along to Kulick.

“We’re in a KISS cover band with an ex-member of KISS,” Jericho says incredulously, “playing songs that no one has ever heard before but they all kick ass.”

Though people have heard the songs before (or else KISS wouldn’t still be a band), the no-makeup era is glossed over, which is something Jericho wants to change.

For now while in quarantine, Jericho and his bandmates are happy to have formed a band that he says is fun and creative, before returning to their day jobs. In this case, it means dropping more ’80s era KISS covers whenever they feel like it because as Jericho says, “Why not?”

“Had there been no COVID, this never would have taken place,” he says. “And gives a little shot in the arm to a scene that’s a little bit stagnant because of what’s going on worldwide.”