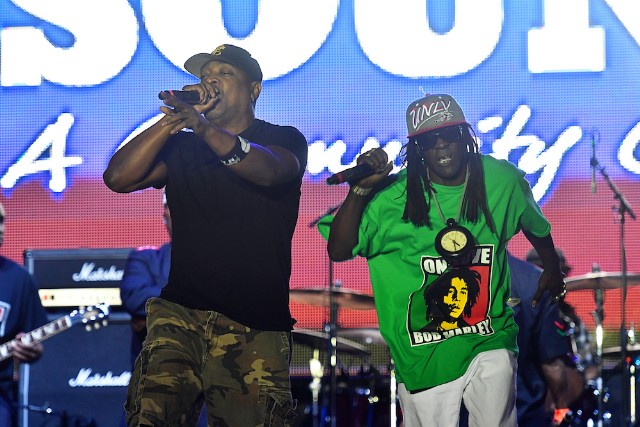 “.@MrChuckD are you kidding me right now???,,,over Bernie Sanders??? You wanna destroy something we’ve built over 35 years OVER POLITICS???,,,all because I don’t wanna endorse a candidate,,,I’m very disappointed in you and your decisions right now Chuck,,,” Flav tweeted.

He continued by saying he didn’t sue Chuck and that he “asked the @berniesanders campaign to correct misleading marketing.”

Flav added that “i’m not on drugs like you’re saying and have been clean for 10 years,,,i have battled addiction before and like millions of other Americans I know the massive toll it takes,,,Chuck you know better than to lie about shit like that,,,,”

On Sunday, after a weekend of squabbling over participation at a Bernie Sanders rally in Los Angeles, Public Enemy and Public Enemy Radio said that Flav was out of the group. Flavor Flav sent the Sanders a cease and desist on Friday about using the Public Enemy name at the rally.

“Public Enemy and Public Enemy Radio will be moving forward without Flavor Flav. We thank him for his years of service and wish him well,” a statement from the group’s rep read. Flav had been with the group since meeting Chuck D. at Adelphi University in Long Island in the mid-1980s.

Following the rally, Chuck took to Twitter, saying ” If there was a $bag, Flav would’ve been there front & center. He will NOT do free benefit shows. Sued me in court the 1st time I let him back in. His ambulance lawyer sued me again on Friday & so now he stays home & better find REHAB.”

A rep for Public Enemy didn’t immediately respond to SPIN’s request for comment on Flav’s tweets.

Check out Flavor Flav’s tweets below:

Also .@MrChuckD,,,i'm not on drugs like you're saying and have been clean for 10 years,,,i have battled addiction before and like millions of other Americans I know the massive toll it takes,,,Chuck you know better than to lie about shit like that,,,,

Update (4:33 pm): Public Enemy has responded yet again in a new statement.

“Public Enemy did not part ways with Flavor Flav over his political views. Flavor Flav has been on suspension since 2016 when he was MIA from the Harry Belafonte benefit in Atlanta, Georgia. That was the last straw for the group. He had previously missed numerous live gigs from Glastonbury to Canada, album recording sessions and photo shoots. He always chose to party over work,” the statement read.

You can read it in full below: