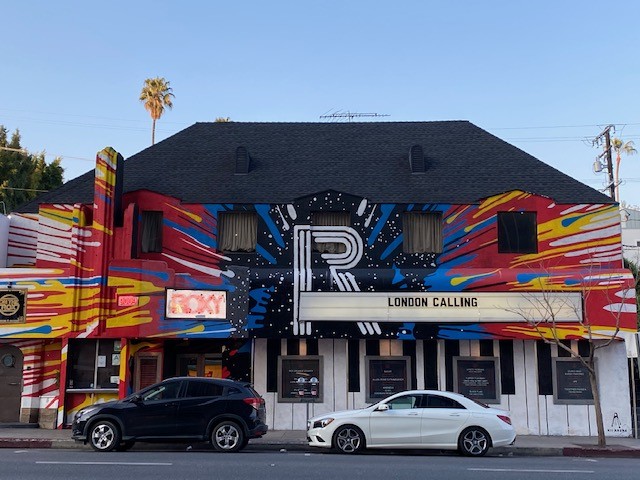 It was a jam-packed night at The Roxy Theatre in West Hollywood on January 11 when fans of The Clash prepared for the time of their lives. Guns N’ Roses’ Duff McKagan, MC5’s Wayne Kramer, The Wallflowers’ Jakob Dylan, Butch Walker, and musician/actor/comedian Fred Armisen were billed for a tribute show honoring the 40th anniversary of the seminal punk band’s third record, London Calling.

Since its initial U.K. release in December 1979 and U.S. release weeks later in January 1980, London Calling has been hailed by critics and musicians alike as one of the most influential records of the punk era. Rolling Stone named it one of the 100 best records of the ’80s and the eighth best album of all-time. Today, The Clash’s landmark album still feels as urgent and as relevant as it was when it was released.

The Clash tribute concert, one of many organized by Jesse Malin and his cousin Jeff Raspe to benefit the Joe Strummer Foundation as well as Music & Memory, was a homecoming set of sorts. Though The Roxy didn’t technically house The Clash’s first Los Angeles performance, their 1980 set at the famed Sunset Strip venue is among their most memorable L.A. shows, charged with precisely the sort of livewire energy the band were known for.

The night kicked off with a beautiful acoustic rendition of The Clash’s “Straight to Hell” from Zander Schloss, bassist for the Circle Jerks. (Schloss previously collaborated with Strummer on several film soundtracks, and also played in Strummer’s band The Latino Rockabilly War.)

The London Calling performance began a little later, with the title track performed by San Francisco musician Chuck Prophet, followed by Dylan. “Jakob, Jakob!” the crowd enthusiastically shouted, with the singer diving into a rousing rendition of “Brand New Cadillac.”

By the time McKagan took the stage in a sleeveless Black Flag T-shirt, the crowd was screaming and whistling. His tight, buoyant rendition of “Clampdown” felt rehearsed, precisely because it was; McKagan performed the song regularly while touring to support his most recent solo album, 2019’s Tenderness.

From there, Saturday Night Live alum Armisen performed his favorite Clash song, “Lost in the Supermarket,” and the kinetic Butch Walker kept the night moving with his spirited, vibrant delivery of “Train in Vain.” There was also a surprise appearance by The Lemonheads’ Evan Dando, who joined John Kastner in for “The Right Profile.”

The night didn’t end when London Calling was over. After the hum died down and cheering subsided, the musicians proceeded to play songs from other Clash records and Joe Strummer’s solo catalogue. L7’s Suzi Gardner performed a blistering rendition of “Keys to Your Heart,” and Wayne Kramer sang “Jail Guitar Doors.” The standout Clash song references Kramer in its opening lyrics, describing an arrest that left the MC5 vocalist in prison for four years for drug distribution.

Walker and McKagan closed out the night with a rocking, anthemic rendition of “I Fought the Law” to a crowd that danced, clapped, and sang along.

Ahead of the show, SPIN caught up with McKagan and Dylan about their love of The Clash. McKagan, who calls himself a Clash “lifer,” says he first saw the band as a 14-year-old in Seattle, when he climbed up a fire escape and squeezed through a backstage window to get Strummer to sign his concert ticket.

“I was there from the beginning,” says McKagan. “They’re a band that changed my life. I saw them in 1979 before London Calling even came out, and that show is still inside me whenever I play. At the end of the show, [Strummer said], ‘There’s no difference between you and us—the people on the stage and the people in the audience. We’re in this thing together.’ I’ve always taken that with me as a musician, and it’s guided my career.”

Dylan, who plays a Fender Telecaster because of Strummer, says he was initially drawn to The Clash after seeing them play live in Los Angeles when he was 12 years old. After the show, Dylan met Strummer backstage, where he complimented the vocalist’s vest. Strummer promptly took it off and gave it to him, who then had it framed.

“I think they’re one of the last great groups,” says Dylan. “If you think about the six or seven giants of the Beatles, the Stones, the Who, Zeppelin and The Band—and you could name a couple of others—but The Clash is one of them. I’m not aware of one afterwards that could fit into that camp of the giants. London Calling is one of the last great top-to-bottom rock and roll records ever made.”

Dylan goes on to add that “Lost in the Supermarket” is the first Clash song that clicked for him as a youngster. “I knew that [The Clash] was the group for me when I heard that song,” he says. “In terms of songwriting teams, Mick Jones and Joe Strummer—that’s a great example of one plus one is three. Two of them together making that song was everything. They were great separately, too, but together it was magic.”

Dylan’s youthful enthusiasm for The Clash is strikingly similar to Malin’s. “The Clash always had a very street rock and roll, “Malin told SPIN during rehearsals Friday. “They had a sense of humor, a rock and roll style, anger and attitude. It wasn’t just a bunch of musicians. They were really doing something together … I learned a lot from them.”

For more videos from the show, visit SPIN’s YouTube page.