Drake Acted Like an Ass at Last Night’s Raptors’ Game 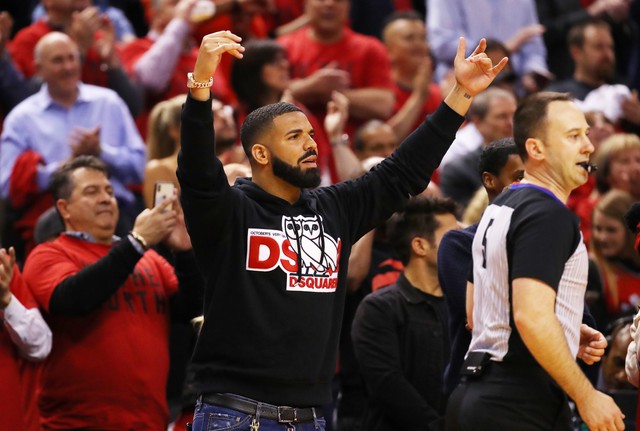 Drake takes being a sports fan seriously. Whether he just decided to be a fan of your team because he partied with their players the night before or he’s been given cushy standing within an organization as shrewd business strategy, he’s gonna pull out all the stops and make the most of every unnecessary camera shot of him. But last night in Toronto he really outdid even himself.

The Toronto Raptors, Drake’s hometown team, are in the NBA’s Eastern Conference Finals, where they’re dueling with the Milwaukee Bucks for a ticket to the NBA Finals and the opportunity to lose in 5 to the Golden State Warriors. Anyone who watched last night’s contest, which the Raptors won 120-102, most likely caught glimpses of Drake eschewing his cozy front row seat in favor of roaming around the bench area so he could taunt Bucks’ star Giannis Antetokounmpo when he missed free throws. It  got to the point where an exec from Antetokounmpo’s agency publicly denounced Drake’s “disrespectful” behavior.

There was also this weird moment between him and Raptors coach Nick Nurse:

Look, listening to Drake’s raps, it is clear he doesn’t always have the best grip on what boundaries are but still, you should go to your seat dude. Perhaps he just thought the old coach earned a quick back rub for calling a good play. As hard fought as it was for Toronto to get this win, clearly no one was having more fun than Drake.