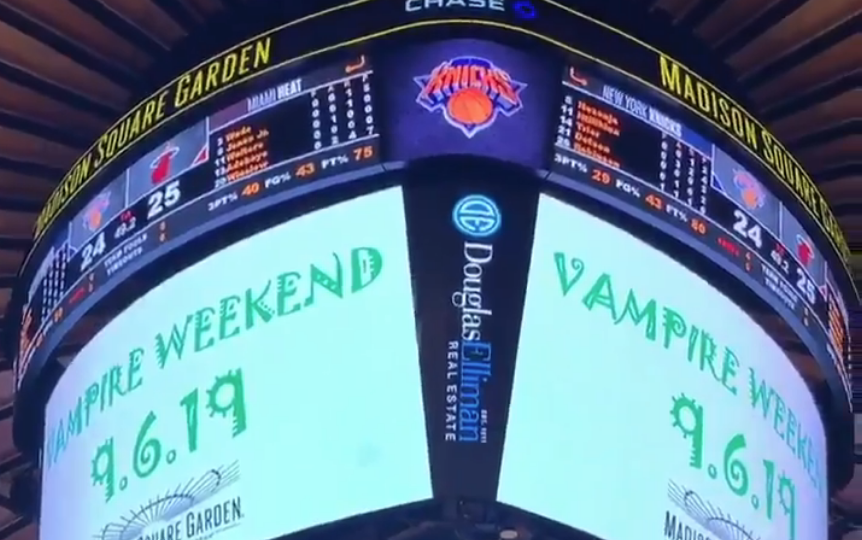 Vampire Weekend announced an upcoming Madison Square Garden performance at a New York Knicks game, which was taking place (of course) at the same venue. Lead singer Ezra Koenig was in attendance at the Knicks vs. Heat game Sunday night with his friends and Neo Yokio collaborators Desus Nice and The Kid Mero. After Koenig was projected on the Jumbotron, the date of the show—September 6 of this year—was displayed in gigantic Jokerman font. (The font has been an obsession of Koenig’s since last year, when he posted many Instagram stories featuring the whimsical font, interviewed its creator on his Apple Music show, and covered Bob Dylan’s 1983 song of the same name with Vampire Weekend at a GQ event.)

Last week, Vampire Weekend released the first two singles from their upcoming album Father of the Bride, which is reportedly due out in March or April. Previously, they teased “Harmony Hall,” which features contributions by Dirty Projectors’ Dave Longstreth, Danielle Haim, and Greg Leisz, by releasing two hours of guitar loops excerpted from the song. Listen to “Harmony Hall” and the Haruomi-Hosono-sampling “2021” here, and read our reverent review of “Harmony Hall” here. Check out footage of the MSG date reveal, and Koenig and Desus mugging for the camera, below.