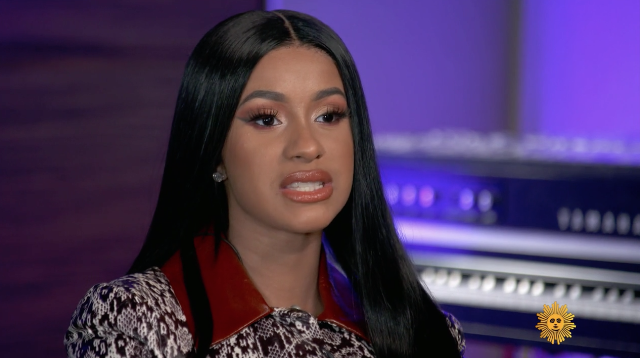 It’s been a huge year for Cardi B. She released one of the best albums of 2018, became the first female rapper to have three Billboard #1 singles, and was just nominated for five Grammy Awards. Today, she went on CBS News Sunday Morning to discuss her rise. “You just gotta be yourself,” she told CBS’s Maurice DuBois. “When I talk, I make a lot of mistakes. Like, I might say words, and the words are not even in the dictionary! But people still like it, because you can tell that I’m saying it from the heart.”

The rapper walked DuBois through her old New York stomping grounds during the segment. “When I was, like, 17, practically almost turning 18 and everything, I got kicked outta my house. I was, like, a very rebellious teenager,” she said. Cardi talked about getting fired from her job at a Tribeca grocery store and then immediately getting hired at the Manhattan strip club Satin Dolls: “I went the next day, and I got hired at the spot. And literally in five hours I made my whole check or a little bit more.”

Cardi continued to open up about her early mix tapes, gaining a social media following, and her current life under the spotlight. “You know, a lotta people like to say, ‘All publicity is good publicity.’ To me, it’s not. Because that takes away of people paying attention to your craft. It makes people not even care about your craft. They just want to see drama.” Watch the full segment below.