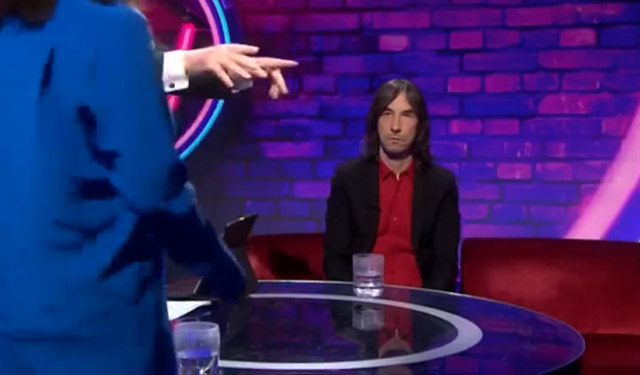 The Skibidi Challenge is, apparently, the latest viral dance challenge sweeping the internet. I’ve never heard of it — I think it might be a European thing? — but it’s named after a song by the Russian rave band Little Big and it involves doing this weird little arm-crossing jig that they do in the music video. It looks really stupid, and Primal Scream frontman Bobby Gillespie knows it looks really stupid.

Last night, for some reason, Gillespie was on BBC’s This Week to talk politics and Brexit. “Politically, I think we’re going backwards,” he told host Andrew Neil. “I think we’re going back to the ’30s.” And at the end of the show, as NME points out, for equally incomprehensible reasons, everybody got out of their seats to do the Skibidi Challenge. Everybody except Bobby Gillespie.

Instead, Gillespie sat rigidly in his chair, completely stone-faced, as Neil and the other guests, British journalist Michael Portillo and Labour Party politician Caroline Flint, busted some silly looking moves. He looked like he truly wanted to be literally anywhere else in the world. Watch below.

Bobby Gillespie’s face as Flint, Portillo and Neil danced around him should win award for TV moment of the year. #bbctw pic.twitter.com/bQdp6vBTXB

Bobby Gillespie regretting his decision to appear on this week while the others dance is my new jam pic.twitter.com/6z306L8ET2

Review: Primal Scream Do the Safety Dance on ‘Chaosmosis’