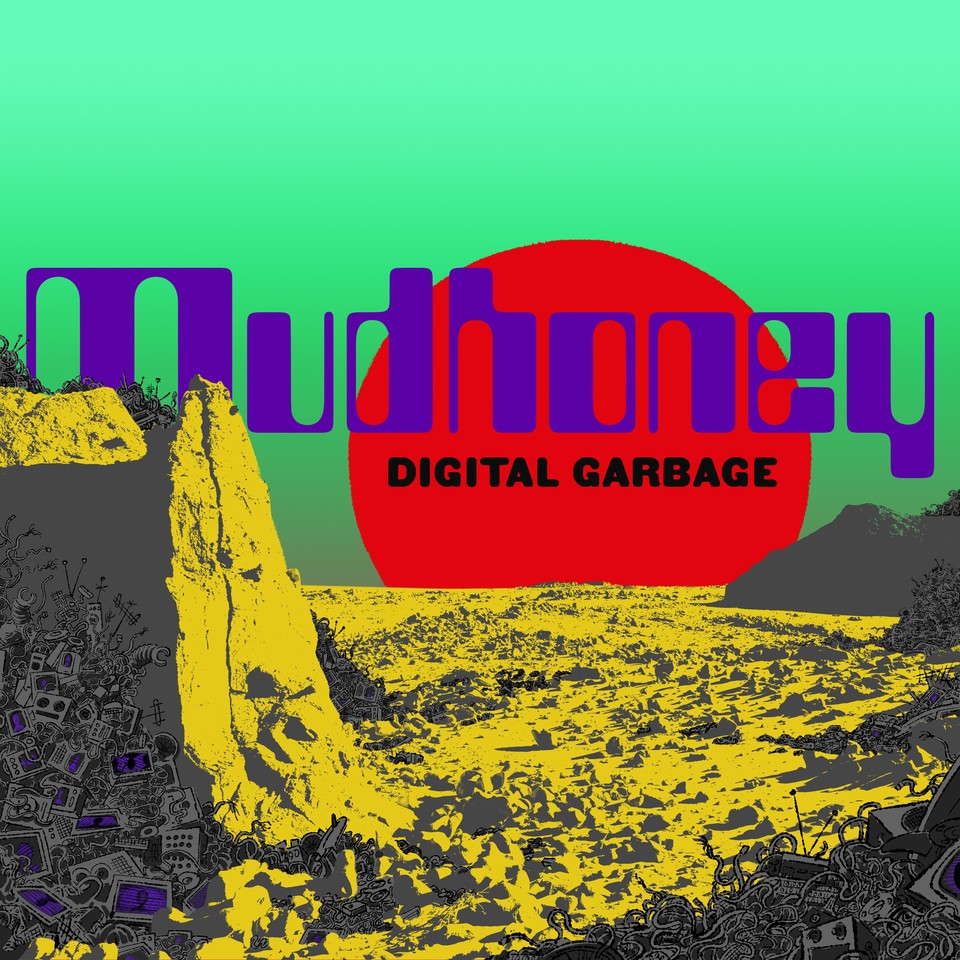 Bands who wouldn’t make a politically charged album about the state of America without an engraved invitation have more or less gotten one in the last two years. But Mudhoney have never waited for the zeitgeist to tell them it’s time to make songs about the stupidity and cruelty of the world. The most important Seattle grunge band who never went platinum, they’ve always traded in bad vibes and acidic sarcasm, and have occasionally made more pointedly topical songs since “F.D.K. (Fearless Doctor Killers),” a 1995 track about violence against abortion providers.

Digital Garbage, Mudhoney’s ninth full-length album, is their most cantankerous yet. Singer/guitarist Mark Arm vents his spleen in many directions, but the religious right gets most of his anger on “21st Century Pharisees,” “Prosperity Gospel,” and “Messiah’s Lament.” Even the song about shooting sprees, “Please Mr. Gun,” parodies Christian values with the punchline, “We’d rather die in church.” There’s something distinctly Gen X about the way Arm voices the right wing’s ugliest thoughts on “Paranoid Core,” ranting about “the Jews, homos, Muslims, Chinese,” that doesn’t come off great in 2018, regardless of the clearly satirical framing. It sounds like a particularly smug David Cross stand-up bit.

Rock bands who express left-leaning politics in their songs are often described as preaching to the converted. But Arm writes like he’s condescending to the opposition, as if he’d want nothing more than to sing these antagonistic lyrics directly to the “evangelical hypocrites” who’d be most offended by them. While many of these lyrics could have been written in Mudhoney’s early years, when Reagan and Bush Sr. were in office and televangelists like Jim Bakker and Jimmy Swaggart were exposed as frauds, Arm’s anger sounds renewed now by presidency of Donald Trump, whom white evangelicals have stood by like no other demographic.

The album’s title is coined on “Kill Yourself Live,” a nasty little number about how “you’ll live on in digital garbage” after broadcasting your suicide on social media. “Kill yourself live, you’ll get so many likes” may be a heavy-handed lyric, but it’s also strangely prescient—a week before the album’s release, Instagram was in the news for a morbid trend of kids faking their own deaths to go viral.

If the lyrics are getting all the attention on Digital Garbage, it’s only because the music is exactly what you’d expect. Mudhoney’s sound hasn’t changed much since the early ‘90s, when they broadened their palette of scuzzy Stooges homages with Arm’s whirring garage rock organ, which livens up “Kill Yourself Live,” and guitarist Steve Turner’s harmonica, which makes an appearance on “Next Mass Extinction.” The band’s talent and chemistry is well preserved, with drummer Dan Peters’s incredible sense of swing and Turner’s bluesy solos both on display to great effect on “Messiah’s Lament.” There just isn’t much in the way of surprises, save for the slow, spacey “Night and Fog,” which rides a menacing groove laid down by bassist Guy Maddison, who joined the band in 2001 when founding member Matt Lukin retired from music (he’s reportedly now working as a carpenter).

Thirty years after their formation, with Lukin’s departure as their only lineup change, Mudhoney are comfortable with themselves to a fault, second only to the even more uncompromising Melvins as their scene’s longest-running band. Although Arm and Turner played in Green River with future members of Pearl Jam, and drummer Dan Peters was briefly a member of Nirvana, they’ve never had the ambitions or crossover hooks of their Seattle peers. After three major-label albums that barely charted in the ’90s, Mudhoney returned to the label they helped build into an indie institution, Sub Pop, where Arm now works as a warehouse manager.

At the end of an album spent almost exclusively airing specific grievances, Digital Garbage closes with its shortest and most atypical song. Over the anthemic gallop of the 90-second “Oh Yeah,” Arm sings about finding an escape in the simple pleasures of swimming, driving, and skating: “I wanna ride my bike until everything’s alright.” At the end of any other Mudhoney album, “Oh Yeah” might feel like a throwaway bonus track. But as the closer to Digital Garbage, it feels like a welcome release of tension, a moment to remember that life isn’t all bad, and it might get better soon.