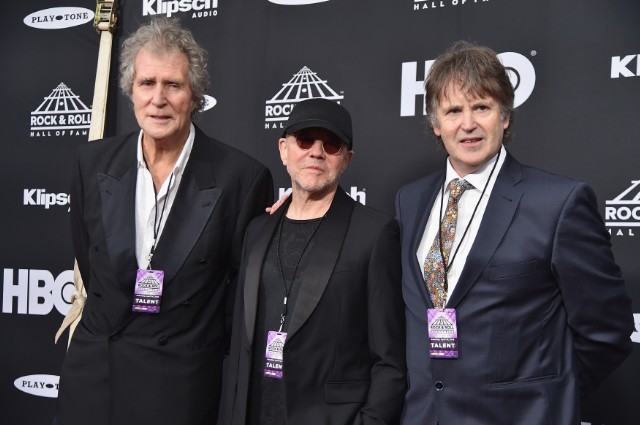 Dire Straits were inducted into the Rock And Roll Hall Of Fame last night, and it was really awkward. All of the other artists inducted — Nina Simone, Bon Jovi, the Cars, the Moody Blues, and Sister Rosetta Tharpe — either performed or had a tribute performance dedicated to them. All of the other artists inducted had a celebrity give an induction speech to introduce them. Dire Straits got neither.

The ceremony’s weird refusal to recognize Dire Straits seemingly sprang from Dire Straits frontman Mark Knopfler’s weird refusal to recognize the ceremony. He didn’t attend. He didn’t explain why he wasn’t attending. He didn’t even publicly acknowledge the induction at all, one way or the other. Neither did drummer Pick Withers, who also wasn’t there. And Knopfler’s brother and bandmate David also skipped, saying that the Rock Hall reneged on their promise to pay for his travel expenses. That’s half of the people in the band that were supposed to be inducted.

And so, Dire Straits became the first band in the history of the Rock And Roll Hall Of Fame to not have an induction speaker introduce them at the ceremony. (Congrats on making history, guys!) After the usual montage, bassist John Illsley and keyboardists Alan Clark and Guy Fletcher just came to the stage and gave short speeches, with Illsley designating himself as the band’s official presenter.

“As a fellow member I found I might be the most qualified one to do this. It’s a bit weird, but life’s strange. I know it’s a little bit odd, but it’s my honor to welcome Dire Straits into the Hall Of Fame,” he began. “I know there’s been a lot of speculation about the fact that Mark is not here, but I can assure you, it’s just a personal thing. It’s personal reasons, let’s just leave it at that. This is really more about a group of people more than one person, it’s a collective, a brotherhood and that’s something that needs acknowledging tonight.”