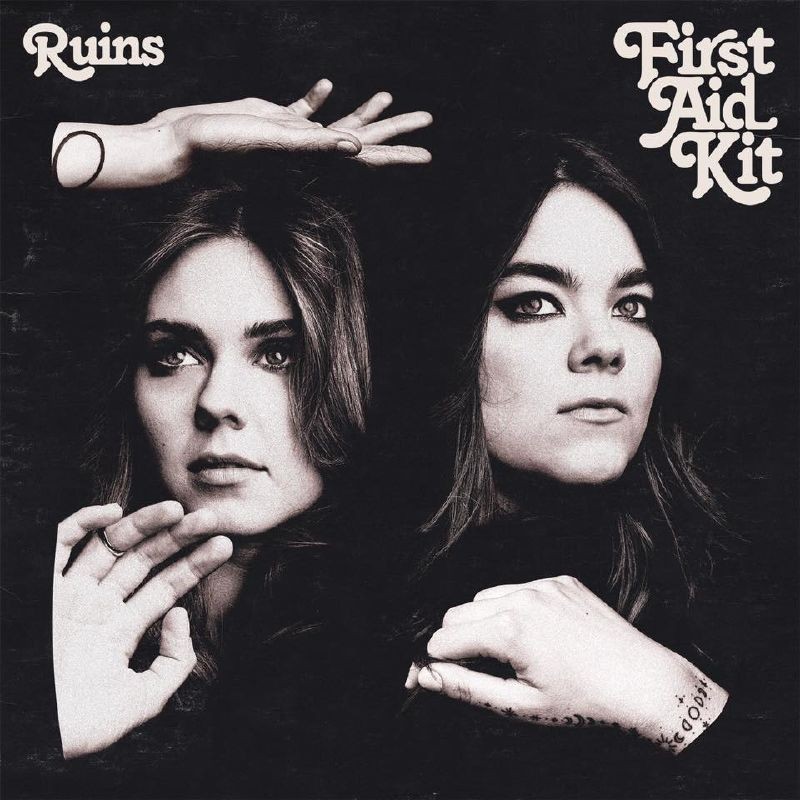 It should be obvious: Ruins is about endings. On their fourth album as First Aid Kit, indie-folk darlings Klara and Johanna Söderberg reckon with adult heartache like never before—perhaps because they never had cause. Outwardly, at least, the Söderberg sisters are an astonishing success, a traditionally gifted pair of Bright Eyes fans from Sweden who were singing with Conor Oberst by the time they released their second album, The Lion’s Roar, in 2012. Their third, 2014’s Stay Gold, precipitated something of a personal crisis: Burned out by a relentless schedule and fighting between themselves, the two vowed to take time off and for a while lived in separate countries. Younger sister Klara, 25, rejoined Johanna, 27, in Stockholm only after the dissolution of her first serious relationship.

The resulting three-and-a-half year break between LPs is nearly twice as long as the sisters allowed themselves in the past. Fortunately for them, their nostalgia-soaked sound is effectively timeless, and even when worn down and wounded, the Söderbergs would rather refine it than tinker with it. To record Ruins, they assembled their most distinguished lineup yet: noted producer Tucker Martine (Neko Case, Decemberists), R.E.M.’s Peter Buck on guitar, Midlake’s McKenzie Smith and Wilco’s Glen Kotche on percussion, ex-rocker father Benkt Söderberg on bass, plus a half-dozen experienced session players. (In an echo of the homemade Fleet Foxes cover that won Robin Pecknold’s admiration in 2008, First Aid Kit recorded R.E.M.’s “Walk Unafraid” several years ago.) The finished product is a continuation of the lush arrangements introduced on Stay Gold, now rendered in the faithful yet slightly hyperreal style familiar from another harmony-centric Martine production, the 2016 supergroup album case/lang/veirs.

Ruins’ motifs feel familiar too, as the sisters plead with an ex-lover to “send me a line” and “say a prayer” on country weeper “Postcard” and gaze forlornly into the night sky of “Fireworks.” The songs weave simultaneously through separate worlds of nature and international concert tours, gloomy psychic landscapes of frozen lakes and desolate interstates. But heartbreak is a little mundane, and in their sincerity, First Aid Kit have always risked coming off as simplistic. Their primary defense and their greatest asset remains their voices, distinctive alone—Klara’s more bell-like, Johanna’s more elastic—and unmistakable together. Sometimes their harmonic stylization does too much, as on “My Wild Sweet Love” (which I can’t seem to stop hearing as though it were “My Sweet Lord”), but most of the time, the pair can wring feeling from lyrics that read flat on the page. When they rhyme, “So I am incomplete / So loud and so discrete,” on “Hem of Her Dress,” the “loud” is loud enough to invite an audience to join.

The new album’s particular saving grace is its self-loathing streak, the sense that scales have fallen from eyes and that Stay Gold’s nebulous disaffection has soured to regret. “Suddenly, we wake from this dream that we have made / It hits you all at once and then it slowly fades,” the sisters harmonize on the beautifully fragile “To Live a Life.” Lead single “It’s a Shame” strikes gold, bringing crunchy pedal steel and a cowboy swagger to the most desperate and embarrassing of breakup negotiations. “Tell me it’s okay / If I ask you to stay,” Klara solos, sounding poised on the verge of tears as Johanna joins her: “Sometimes the night cuts through me like a knife.” It ranks among their best songs, all of them good enough that most modern folk-pop hopefuls might count themselves lucky to have written just one.

Correction: An earlier version of this review misstated the Söderberg sisters’ respective ages.