Review: The Jesus and Mary Chain Correct Their Course on the Satisfying Damage and Joy

Home » New Music » Reviews » Review: The Jesus and Mary Chain Correct Their Course on the Satisfying Damage and Joy

Just think of the legacy of Jim and William Reid, the two brothers helming the Jesus and Mary Chain for more than 30 years of hurts-so-good rock. Since the band’s breakthrough wall-of-noise 1985 debut Psychocandy, which traded in gorgeous melodies and blistering fuzz, the Mary Chain had the expectations of their groundbreaking sound to live up to–explosive outbursts and pop gestures as reliant on their knowledge of psychedelic history as much the aggressively apathetic can-do of Scotland in the ’80s. They split after the 1998 album Munki, itself as big a disappointment to their original vibe as anything they’d released since Psychocandy. What happens in between is, for a fresh generation of 33 1/3 readers, beside the point. JAMC is back now, amid a field of re-ignited shoegaze spark plugs that includes My Bloody Valentine, Slowdive, and Ride, all of them benefitting from a new generation of listeners.

On Damage and Joy, the first Jesus and Mary Chain album in nearly two decades, the brothers and company aim to right the band’s course, even reaching into their back catalog to rework previous material. The result is a satisfying if not uneven release that never drags in its lament, looking toward the next ballad lost among the chaos. Richly produced fuzzed-face guitars and clattering percussion accentuate the band’s classic noise-pop formula without ever feeling staid. (There’s a tambourine on all but one song, too.) As fucked up as they get, they never overstay their welcome, a talent perfected back when they were doing 20-minute sets of reckless violence or debilitating inebriation.

For a couple’a dudes now sitting comfortably in middle age, the Reids have consistently found a conduit for lackadaisical angst. They tap into lost romance, drugs, and the occasional political missive, though none of the themes stick enough to call it revelatory. On the other hand, the songs make it comfortable to take the casual drama of just plain letting it go. Opener and lead single “Amputation” is fittingly over before it begins, offering little insight into picking up the pieces following being cut off from someone. How could you? You’ve inevitably lost a hand.

That resignation to separation bleeds through the entire release. Though it might come off a little too detached for the present moment, in which everything feels alarming and urgent, the disaffected vibe is at least honest, a sort of soundtrack to the phantom limb syndrome felt by the disconnected-yet-woke who expected to be living under a different administration. “God bless America / God bless the USA/ in the land of the free/ wishing they were dead,” Reid sings in album centerpiece “Los Feliz (Blues and Greens),” an ironic overcorrection. On album closer, “Can’t Stop The Rock,” the band shames the United Nations for “their half-hearted investigations.” It’s not easy being stuck in the past. 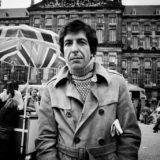 “Simian Split” marks a sonic juke forward, taking on a warbling sax and frenetic drum fills. The lyrics more than hint at a wild conspiracy theory that William shot Kurt Cobain at the behest of Courtney Love, as he literally says, “I killed Kurt Cobain/ I put the shot right through his brain.” If it weren’t so over-the-top, it would be downright offensive. And it does serve as a reminder to where this band sits in the canon—an urban legend of this magnitude is not quite unbelievable. We’d be remiss to not expect shock value from these lads. Laments on broken relationships and drug-fueled nights only propel a record so far. The exuberance of this pair can be felt throughout—this is rock ’n’ roll, and it’s that spirit that keeps it alive.

the jesus and mary chain