Cards Against Humanity Isn’t the Problem; Your Social Circle Is 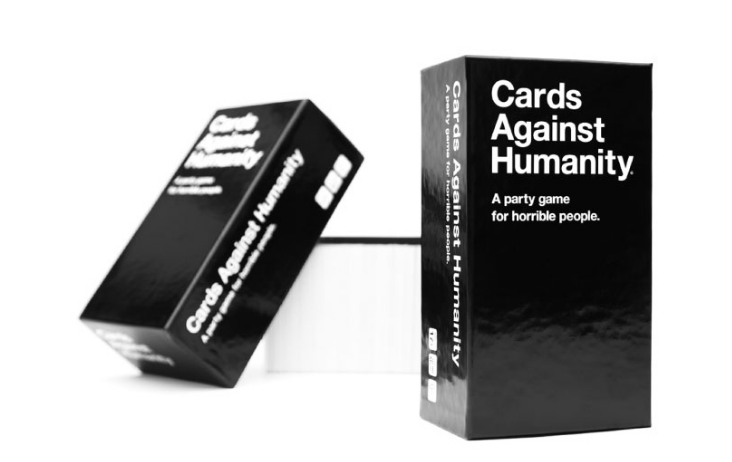 Every week, the New York Times Magazine runs a “Letter of Recommendation,” where a writer expounds on a person, place, concept, or general thing they find worthy of recommendation. This week, however, the Grey Lady switched the format and published a digital-only “Letter of Complaint,” in which writer Dan Brooks excoriated the popular card game, Cards Against Humanity.

The premise of Cards Against Humanity is simple. You have two pools of cards, black and white, containing setups and punch lines. (Example of a black card: What’s the next Happy Meal toy?; example of a white card: My big-ass dick.) Each player is given a number of white cards; in each round, a black card is picked and placed in the center, requiring each player to fish for an appropriate corresponding punch line from the cards they’ve drawn. The winning combination is determined by a player who’s bowed out of the round; when he’s awarded the point, the next player takes his turn judging. You keep going until someone has hit a set number of points, or when it’s time to do something else. (The box is large, and filled with many cards: You can play it all the way through, but it’ll take several hours.)

It’s Mad Libs for off-color jokes, and Brooks’ point was pretty simple: Cards Against Humanity is a game for assholes. It encourages the secret degenerate in all of us; it safeguards the de rigeur racism at the heart of the American experiment as actually rebellious. “Cards Against Humanity recasts popular prejudices and gross-out humor as acts of rebellion for small groups, imparting the thrill of conspiracy to values most people hold in common,” he writes, convincingly.

Brooks’ read is apt, and likely to gain traction with a lot of people who’ve been rubbed wrong by the game. (Disclosure: I’ve written for the publication a few times, and I’ve exchanged pleasant messages with Brooks on Twitter.) If you believe the un-clever ad copy, the game’s formula does edge one toward bawdry, gross-out humor—punchlines about eating dead babies, fucking Gandhi, and such. Something something black people. The gags are made obvious and depressingly banal when mass-marketed to millions of people across the country. “A party game for horrible people,” the tagline brags, perhaps accurately.

None of that is really funny on its own. Apropos of nothing, a dead baby is a dead baby, not something to earn a reactive clap. It’s also true that you can play the game that way, fishing for the most outrageous possibility. If it wasn’t for me, you wouldn’t even be talking about… Vishnu’s dick, a gag potentially goes. Gross. Nobody is defending that. The game’s punch lines occasionally lead one to take shots at the underserved at society, too, and when you notice that the game’s creators are all white dudes, it evokes a feeling of revulsion: just what the world needed, another dose of cynical, “can’t you take a joke” white dude humor that punches down, not up.

But I beg to differ, because I’ve played Cards Against Humanity and had fun! As a game, it’s tactically enjoyable—it has as much gamesmanship as Monopoly, another game with a prescribed concept that’s less about following the rules and outcomes than it is learning your opponents’ tendencies. In the card game, you’re not trying to produce your own best joke, but the joke that’s most likely to get a reaction from the judge, whose authority in handing out points is final.

And when you learn each person’s tendencies, it goes deeper than gamesmanship, because you’ve figured out how to make someone laugh. I don’t think this is a small trait to draw from a game, because understanding someone’s sense of humor helps us to understand their joy, the way they react positively to what life gives them. It’s certainly better than Monopoly, which instructs us about which of our friends is the most cutthroat capitalist.

To provide a raw example: A pairing of cards that would produce a wry, ironic punchline—something closer to my sense of humor, which loves shows like Bored to Death and Eric Andre–would win when I was playing judge. But smugness or absurdity doesn’t work for everyone, and players have to cater to their friends’ sensibilities as a result. There are enough cards to tickle a range of humors–it might take a few turns to peg what makes someone laugh, but in the process you learn a little bit about each other. We are closer, through this process.

I have repeated this process in real time, for the better, with my cousins over the holidays. And every year, I’m re-familiarized with the psyches of the people in the room: Jeff’s penchant for slapstick irony; Kim’s capacity for edginess; Sean’s muted, dry take on life. (Perhaps we could just talk it out, instead, but that happens through the game; we’re not just competitive monsters. Or we could not play at a game at all, but whatever, games are fun.)

Sure, there are sour notes, like when a bad joke about a dead baby lands and drains the air from the room. But the aspirationally transgressive barbs can serve a different purpose: If the off-color cracks don’t make us laugh, they force us to make a calculation. Do we let the joke slide? Do we call out a loved one, and hope to explain, in a non-pedantic way, why the joke wasn’t just unfunny, but uncreative in a genuinely offensive way? Maybe, maybe not.

The best experience I’ve had playing is in a room full of mixed races, genders, and sexualities—an opportunity for everyone to take offense, or find something funny. This is where the work gets done! This is how we avoid dancing around the point, and grip with what’s real! Most people, some of them white and some of them non-white, don’t do that in their everyday lives. Depravity isn’t exclusive to those who assume the moral high ground, and if everyone playing is genuinely interested in knowing more about the people in the room, this will not cause chaos. Your friends and loved ones are multifaceted humans with shades of grey to their personality. Cards Against Humanity’s bluntness is a way, like any other, to gauge the nuances of their personalities.

This is also the main problem of Cards Against Humanity: It reveals how much one does or doesn’t like the people around them. It bonds us to our social circumstances, or casts us out. That’s a fair critique, inasmuch that it always sucks to learn how much other people suck, though that hardly seems solely the game’s fault. A game like Halo might attract a fanbase of Mountain Dew-chugging, homophobic slur-whipping teenagers, but nobody would blame the game—only the negligent parents.

And if you, the metropolitan witticist, are surrounded by deplorables and rakes, by the cold-hearted and the unkind, by uncreative yokels who snidely ask why don’t All Lives Matter, then, yeah, this game is not for you. You will get mad, and want to leave the room—a fair reaction when faced with the crumminess of others. But if you consider yourself a responsible person who’s encountered Cards Against Humanity and not come away disgusted, it might mean that you’re one of the lucky, someone who gets to spend most of their time around people they like, and want to know more about. On the other hand, you could just be a horrible person. But that’s for others to decide.